Bobbi Hornbeck ’08, adjunct faculty of Sociology and Anthropology at Stockton, spent 18 days this summer in the remote western Aleutian Islands of Alaska. Hornbeck was busy collecting data for her research project, “Aleut Monumentality: Hunter-Fisher-Gatherer Transformations of the Rat Islands Group of the Western Aleutian Islands, Ala.”

In April 2019, Hornbeck learned she was awarded a $19,067 grant from the National Science Foundation (NSF) for the project, with additional funding from the NSF’s Arctic Research Support and Logistics Program through the Office of Polar Programs to cover her logistical costs. 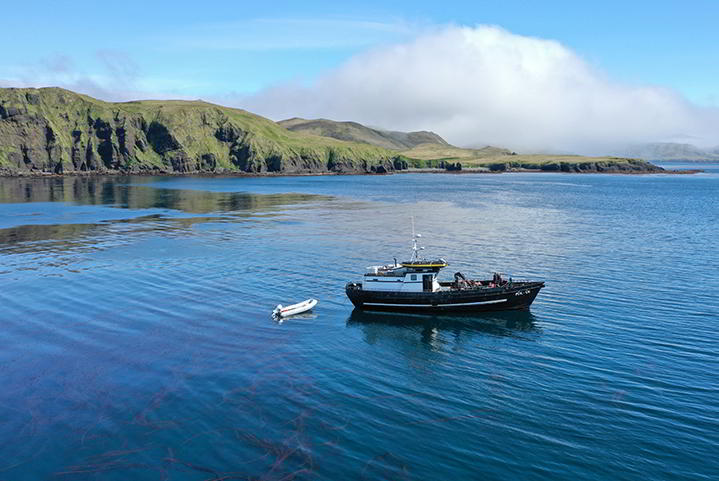 A drone captured this shot of Hornbeck's research vessel off the Rat Islands.

The project gained traction earlier this year when she was selected as a winner of the 2018 PaleoWest Foundation Graduate Scholarship, which helped offset the costs of capturing and processing imagery of the cultural coastlines of the Rat Islands which are being threatened by warming Arctic climates.

Can exercise have the same effect on anxiety, depression and pain tolerance as an opioid?

Junior exercise science major Harlee York from Riverdale, New Jersey presented her addiction research at the American College of Sports Medicine’s 66th Annual Meeting May 28 to June 1 in Orlando, Florida. She is the first undergraduate student in Stockton’s Exercise Science program to present at a national meeting.

York’s research was titled “Changes in Analgesia, Hyperphagia and Depression are Mediated by Endogenous Opioids Following Forced Swimming Exercise.” It was a collaborative effort with exercise science professors John Guers, Kelly Dougherty and Bryce Muth. The goal of the project was to analyze the brain’s own internal opioid system, using mice and the opioid receptor-blocking drug Naltrexone, to see if exercise had a similar effect as opioids when dealing with depression, anxiety and pain tolerance. The research team analyzed the mice’s behaviors while swimming, both with and without Naltrexone, to note any behavioral differences.

Stockton University has joined the Age-Friendly University (AFU) Global Network, a consortium of higher education institutions which agree to support its 10 principles to becoming more age-friendly in programs and policies.

“Our analysis of the 10 AFU principles indicates their substantial fidelity with Stockton’s mission, vision, and values to serve diverse students and adults of all ages and in our role as a major change-agent and anchor institution in our region,” Stockton President Harvey Kesselman said in his endorsement of Stockton’s application.

Getting whiter teeth may have some negative side effects according to research by a Stockton professor and her students.

Undergraduates working in the laboratory of Associate Professor of Chemistry Kelly Keenan, PhD, presented their research on teeth whitening products at the American Society for Biochemistry and Molecular Biology annual meeting during the 2019 Experimental Biology meeting April 6-9 in Orlando, Fla.

At this conference, educators, researchers, and other members of the higher education community gather to discuss diversity-related topics, present relevant research, and network with other professionals.

Three students shared poster presentations at the conference; Uka discussed her work regarding the effects of microgravity on the self-assembly of PEGMA and drug delivery systems. Black explored the social, cultural, and technological implications of the #MeToo movement, and Schuler proposed a neurobehavior model to accent perception reprogramming. 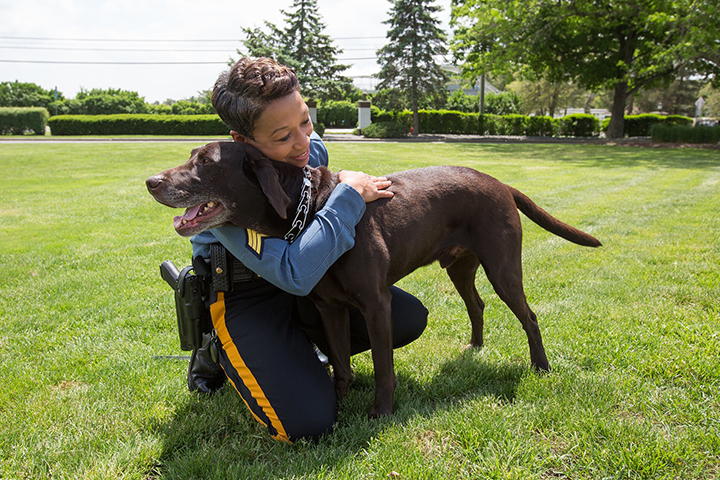 The Stockton University Police Department K9, “Hemi” the chocolate lab, and his handler, Lieutenant Tracy Stuart, had another explosive performance at the 2019 United States Police Canine Association (USPCA) National Detector Dog Trials, bringing home the title of the top explosives detection team in the nation for the second year in a row.

The annual event, held this year in Albany, New York from May 5-8, brings certified detector dogs and their handlers together for training, certification, and competition. Teams are evaluated on accuracy, precision, quality of handling, and overall performance of both the dog and the handler. Winners achieve national certification in the areas of explosives detection, narcotics detection and accelerant detection.