Galloway, N.J. – The Stockton University Police Department K9, “Hemi” the chocolate lab, and his handler, Lieutenant Tracy Stuart, had another explosive performance at the 2019 United States Police Canine Association (USPCA) National Detector Dog Trials, bringing home the title of the top explosives detection team in the nation for the second year in a row. 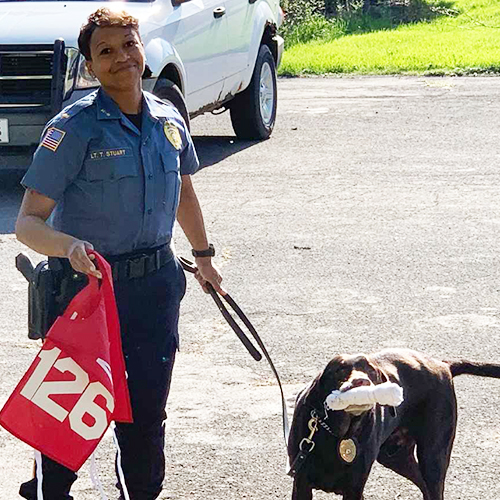 The annual event, held this year in Albany, New York from May 5-8, brings certified detector dogs and their handlers together for training, certification, and competition. Teams are evaluated on accuracy, precision, quality of handling, and overall performance of both the dog and the handler. Winners achieve national certification in the areas of explosives detection, narcotics detection and accelerant detection.

This year’s event consisted of almost 100 police dogs and their handlers from all over the country.

Forty-one teams, including Stockton, competed in the explosives detection competition. In Phase One of the competition, participating dogs had to pass a nationally e 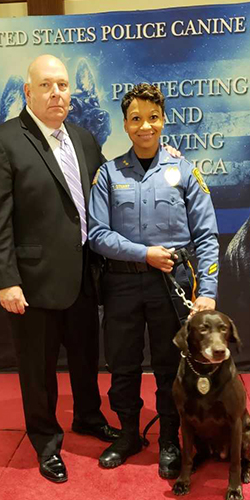 stablished odor recognition test, in which they were required to sniff 18 cans and detect the six that contained explosive materials.

Last year Stockton hosted the trials, and Stuart and Hemi received the same top team title for explosives detection. Since the USPCA’s establishment in 1971, this is the first time a team has achieved two consecutive first place championship wins.

“With such great competition on someone else's home field, we are completely validated.” said Stuart. “It wasn’t just luck last year.”

Stuart credited hard work and preparation with her trainer, retired chief Thomas Conroy, and the support of the N.J. State Police for their success.

“It was incredible,” she said. “I was beyond words. It was truly a monumental moment not only in my career, but in my life. Hard work and preparation are everything, with a little luck and the grace of God, of course.  We are very blessed to have the undying support of our Stockton family."

Hemi declined to comment, but enjoyed the celebratory towel reward he received for his performance.