Bobbi Hornbeck ’08, adjunct faculty of Sociology and Anthropology and a lifelong resident of Cape May, was selected as a winner of the 2018 PaleoWest Foundation Graduate Scholarship. Applicants were unanimously selected by the Foundation’s board of directors as the top contenders.

Hornbeck said she is honored to receive a scholarship of $2,000 by the PaleoWest Foundation in support of her doctoral dissertation research project, ‘”Aleut Monumentality: Hunter-Fisher-Gatherer Transformations of the Rat Islands Group of the Western Aleutian Islands, Ala.”

“The funds will be used to offset the costs of capturing and processing high resolution aerial imagery of the cultural coastlines of the Rat Islands which are being threatened by warming Arctic climates,” she said. 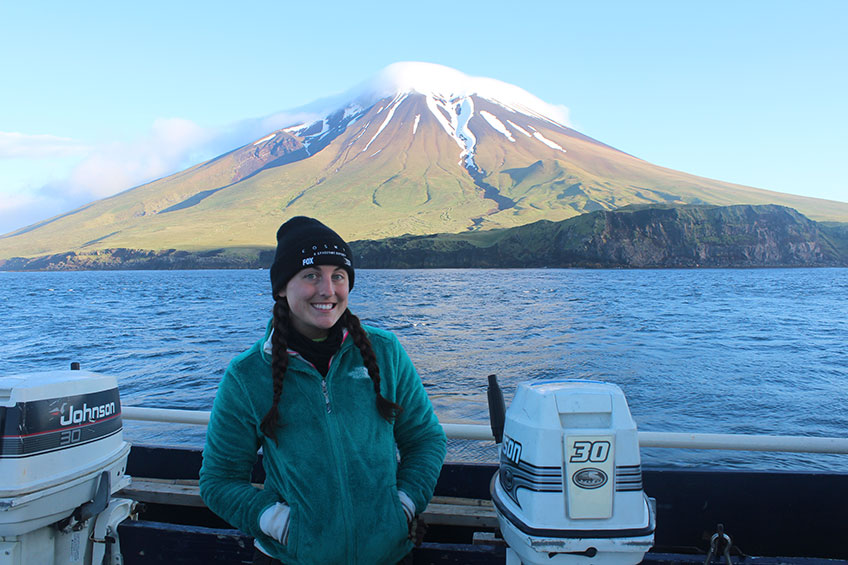 Earth mounds occurring along the coastal plateaus of the Rat Islands in the western portion of the Aleutian Islands of Alaska have long believed to be the result of bird activity. Hornbeck’s research has shed new light on these earth mounds by recognizing them as human modifications of the landscape and by including them in the Aleut archaeological record. Her dissertation project examines the role of these monumental constructions in the social and political complexity of the people living on the Rat Islands between 1,000 and 4,000 years ago. She is interested in monumentality as a mechanism for marking group-identity amongst hunter-fisher-gatherer populations. Her research will link these previously unrecognized cultural features of the western Aleutian Islands to established discussions of Aleut monumentality in the eastern portion of the Aleutian Islands ultimately highlighting a pan-Aleutian monument tradition spanning at least three millennia.

“Archaeological research is imperative as these cultural sites face potential negative impacts from warming Arctic climates that will interfere with the preservation of the organic composition of the peat constituting the mounds,” Hornbeck said. “Some of the broader impacts of this research project include the engagement of women in STEM disciplines, the increase of interest in the Arctic and human-impacts, and the unprecedented addition of high resolution drone imagery of the Rat Islands for the Aleutian Islands research and wildlife management communities.”

When reflecting on when she first became interested in this subject matter, she said it had been lifelong.

“I’ve always had an inherent fascination with rocks, dirt and bones. As a child, I spent countless hours outside collecting rocks and digging holes in the yard – as many children do. That fascination would never have bloomed into an interest in archaeology without guidance from my mother though,” Hornbeck said. “She kept dozens of stunning photographic books about nature, history, prehistory and culture within my physical reach. Some of these books were even specifically about archaeological research. I still do not know if she did that on purpose, but either way I owe the realization of my interest in archaeology to the access of those books at a young age.”

Hornbeck is a doctoral candidate in Anthropology with a specialization in Archaeology through SUNY-University at Buffalo.