Above, Jonathan Tadros with the research poster at the conference in Florida. Below, Isaiah Ailes and Diana Valdes

Galloway, N.J. _  Getting whiter teeth may have some negative side effects according to research by a Stockton professor and her students.

Undergraduates working in the laboratory of Associate Professor of Chemistry Kelly Keenan, PhD, presented their research on teeth whitening products at the American Society for Biochemistry and Molecular Biology annual meeting during the 2019 Experimental Biology meeting April 6-9 in Orlando, Fla. 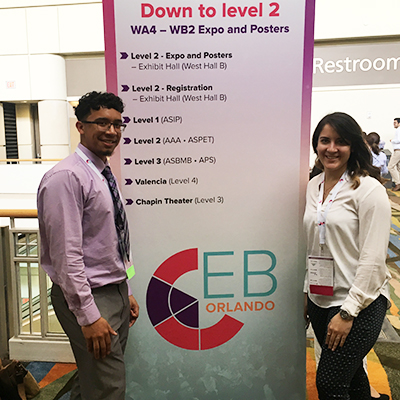 The tooth is made of three layers: the outer tooth enamel, an underlying dentin layer and connective tissue that binds the roots to the gum. Most studies of whitening strips have focused on tooth enamel, which contains very little protein. Kennan’s research team focuses on dentin, which makes up most of the tooth and has high levels of protein, most of which is collagen. Previous work by the researchers showed that collagen in the dentin layer decreased when teeth were treated with whitening strips.

“Our results showed that treatment with hydrogen peroxide concentrations similar to those found in whitening strips is enough to make the original collagen protein disappear, which is presumably due to the formation of many smaller fragments,” said Keenan.

The researchers point out that their experiments did not address whether collagen and other proteins in the teeth can be regenerated, so it is unknown if the tooth damage is permanent. Next, they plan to further characterize the protein fragments released when collagen is treated with hydrogen peroxide and determine if hydrogen peroxide has the same impact on other proteins in the teeth.

Keenan said she got interested in the topic three years ago when a student was looking for a project that related to his interest in attending dental school.  She had noticed that her own teeth became sensitive after using whitening strips and suggested it as a research project.  Students have continued with the research each year.

The projects received quite a bit of media attention, including on the Today Show.