From left, Stockton Art Professor Michael McGarvey with his students Ruby Rodrigues, Tiffany Ibezim and Avery Garlic, and Biology Professor Matthew Bonnan. The students have worked with Bonnan to create animation for the music videos on Bonnan's new album titled 'Once Upon Deep Time.'

Galloway, N.J. — You might think it’s a little unusual for a scientist to also be a singer/songwriter. 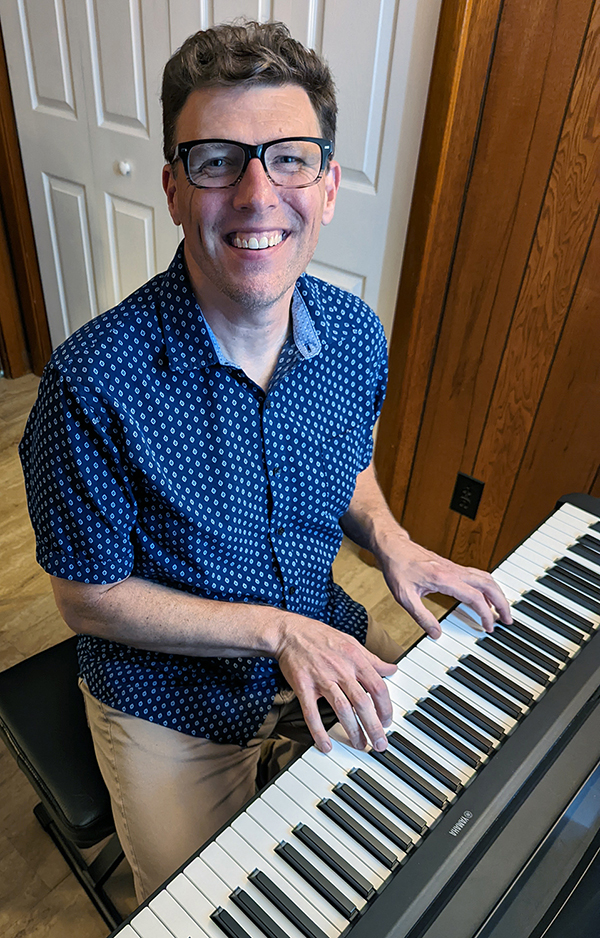 That sense of togetherness is one of the goals that Bonnan is trying to achieve with the release this month of a new album of 12 original songs titled “Once Upon Deep Time.” Bonnan has used his primary field of paleontology to tell a story through music about how sound connects us to the past.

“There is some science content in there, but it’s not supposed to be a K-12 lesson,” he said. “It’s supposed to get people to stop for a moment and go, ‘I didn’t know that. That’s interesting.’ Maybe that encourages some people to look into things further.”

The lyrics of the first single, “Dinosaur Songs,” mention how birds are actually living dinosaurs that have unique anatomy features like a wishbone that appear nowhere else except in birds and dinosaur fossils, Bonnan said.

The sounds those birds make are a reminder of the ties to dinosaurs in our past. And that theme of connectivity is intertwined in each of the 12 songs. Bonnan said all the songs focus on the evolution of hearing “because well, you hear music.” And the album is a way to put music out in the world for everybody to hear and “spread this message of community,” he said.

“As a scientist, I’m trying to do my part to remind people that we have a lot more in common than we don’t, and that it’s kind of magical when you look around and realize that every living thing you have a common ancestor with,” Bonnan said.

Bonnan’s musical project began at the beginning of 2021 when he found himself feeling isolated and disconnected during the COVID-19 pandemic. He decided to learn to play the piano through books, YouTube videos and some lessons from his son’s music teacher.

“My world was definitely a lot of walls and screens,” he said. “A lot of what came out of those screens was not good, a lot of anger. I wanted to reconnect, talk to each other. Let’s be human again. So there are definitely hints of the pandemic in these songs.”

Once Bonnan got back to campus and teaching in person, he was able to finish a demo album late last year. But a lot of the songs still needed some work, and he also wanted to get Stockton students involved in the project. He petitioned Stockton to take a sabbatical this fall to finish the project.

“One of the great parts about working at Stockton is that I can actually do a project like this,” he said. “If I was at a lot of other universities, they would be like, ‘You’re a scientist. We aren’t giving you a sabbatical to do this art project. Where is this going?’ It’s such a wonderful gift to have a job where you can work your mind in different ways.” 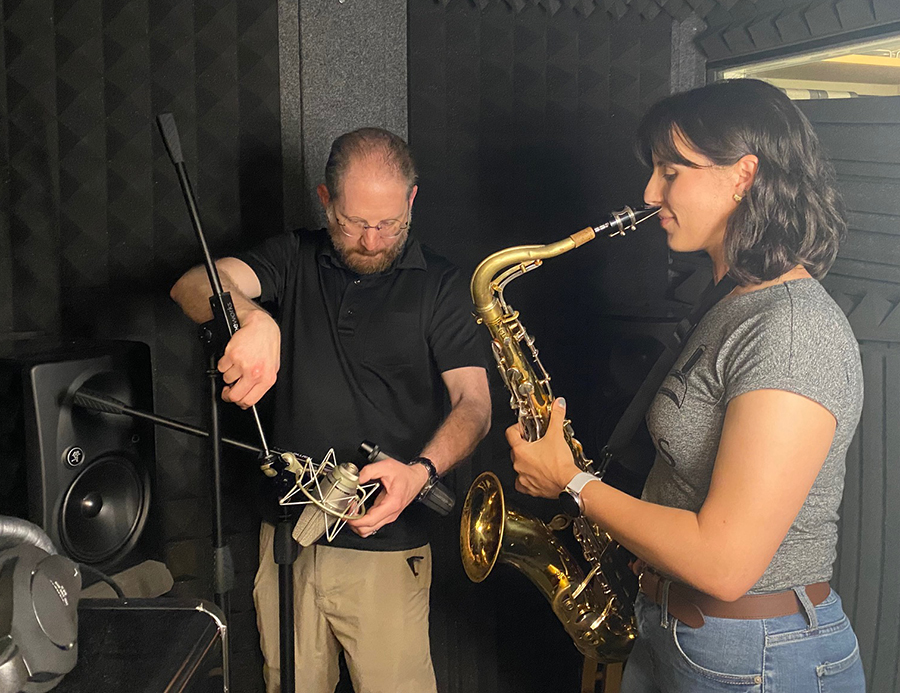 Bonnan reached out to Stockton Physics Professor Neil Aaronson, who maintains the Stockton Acoustics Lab and is the music director of the student a capella singing group.

“I wanted to involve students who aren’t your typical STEM students. I’m already reaching them,” Bonnan said. “This was a way to reach students in other disciplines like the arts.”

Aaronson arranged for Bonnan to record the songs in the lab and also had the a capella group sing background vocals on the song “Storytellers.” His daughter, Quinn, 17, sings on a song and his son, Max, 14, plays guitar on another. Bonnan also asked a former student, Samantha Giancari, to record a saxophone solo for the song “Distant Touch.”

“I was half joking when I asked him if he needed any backup horns,” said Giancarli, who’s a 2016 Stockton graduate with a degree in Biology and Geology. “It was awesome.”

Giancarli said Bonnan’s project is really important because it makes this kind of information accessible and fun.

“Science outreach has always been an important thing, but especially now since the pandemic and since we’ve sort of been in an era of science misinformation,” said the Ewing Township native, who’s studying for her Ph.D. at Drexel University.

In addition to getting music students involved, Bonnan teamed up with Professor of Art Michael McGarvey’s “Design for Community Partners” class to create animation videos for the music. 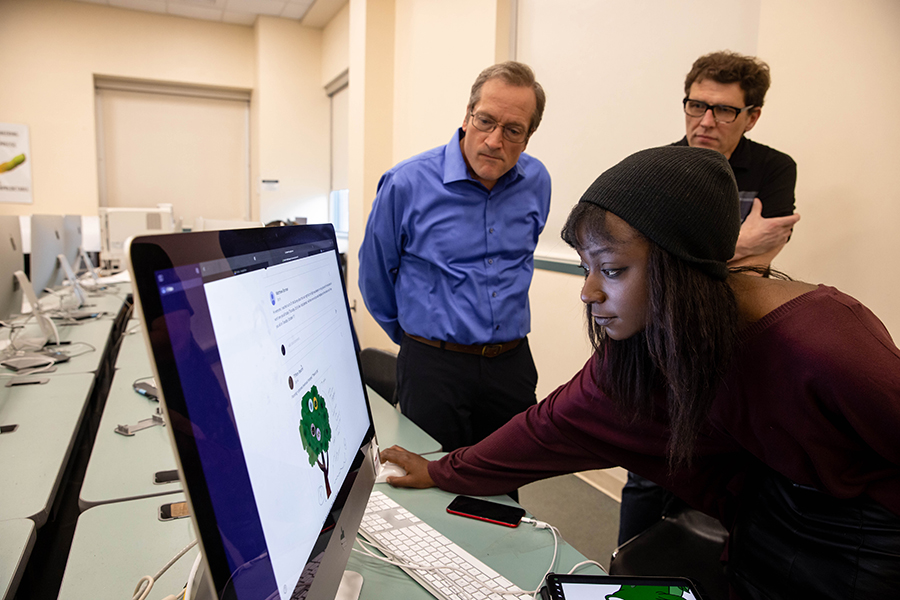 Ruby Rodrigues is one of the art students working on Bonnan’s project. The senior from Egg Harbor City used computer software to create people and prehistoric animals for the video for “Into Thin Air.” Her designs were then given to other students and Bonnan to animate in the videos.

“It’s very cool. I’ve never been able to work on a music video before, so I think it’s a really great experience,” said the student in the Accelerated Dual-Degree Program for Business Majors. Her minor is in Digital Literacy and Multimedia Design. “The coolest part is when they take the characters I’ve made and see them come to life.”

She did a lot of research on what plant and animal life looked like during that time period to make the illustrations as realistic as possible. 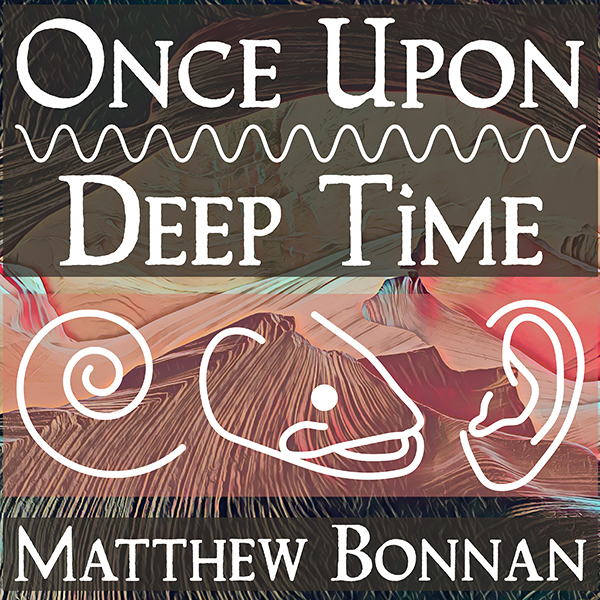 “This class allows you to take what you’ve learned and apply it to a real-life setting,” Rodrigues said.

Videos for a few of Bonnan’s songs are already posted on his YouTube page. Once the entire album is released on Dec. 16 it will be featured there and on his pages on the HearNow and Bandcamp websites. He also hopes to eventually perform the songs live for the public.

“It’s just a whole different perspective, a whole other way to engage students and talk about things,” Bonnan said of his music. “I know this is going to come back in really good ways into my classes when I start teaching again.”