Always dial 911 to report a crime

Please use this link to report any crime or unsafe condition anonymously to Stockton University Police.

Please use this link to submit a concern, complaint, or bias incident.

Office of Diversity and Inclusion

In collaboration with the Campus Police and Student Affairs, the Office of Diversity and Inclusion provides leadership and oversight to the Bias Prevention, Education and Review Program.

Responsibilities of the Bias Prevention Education and Review Program

What is DART: The Demonstration Action Response Team (DART) consists of  student affairs, public safety, and other professionals who may be called upon to assist in the planning and managing of demonstrations, rallies, protests, and other crowd-oriented campus events planned or attended by students.  DART members serve on behalf of the Vice President of Student Affairs.

What DART is Not:  The Demonstration Action Response Team (DART) does not determine who may or may not demonstrate on or occupy University property.  For additional information regarding the Use of University Property, please see Procedure 3103.

This web page is intended to direct members of the Stockton community to information that will provide direction on defining, understanding, identifying, and reporting bias-related incidents and/or hate crimes.

Stockton University’s mission is to develop engaged and effective citizens with a commitment to life-long learning and the capacity to adapt to change in a multi-cultural, interdependent world.  We value diversity and inclusivity, which are one of six key areas in our Strategic Plan.  We are committed to integrity, honesty, dignity, civility, openness, respect, and accountability in its actions as well as in the means through which all members of its community communicate among themselves and with the wider world, as reflected in Stockton’s Mission/Vision/Values, as well as in Stockton’s Statement on Diversity, Equity, and Inclusion.

Institutions of higher education are not immune from bias related incidents or hate crimes, and neither is Stockton University.  The 2020 Anti-Bias Vision for the Next Generations Report noted, among other things, that “bias incidents target people because of what they look like, where they come from, how they worship, and who they love.” [1]

The University does not condone such incidents or behavior and will respond to such reports utilizing our codes of conduct and our non-discrimination policies, as appropriate.

If you witness what you believe to be a possible bias-related incident or hate crime, contact the University Police at 609-652-4390.  For emergencies, dial 911 immediately!

We all need to work together to help keep Stockton a place where everyone feels welcome, safe, and supported.

What is a bias incident?

For New Jersey law enforcement purposes, a bias incident is defined as any suspected or confirmed violation of N.J.S.A. 2C:16-1(a)(1) or (2).1 A “bias incident” is any suspected or confirmed act of bias intimidation.[1]  Bias intimidation occurs when an enumerated offense, such as harassment, assault, terroristic threats, criminal mischief, arson, or homicide, is committed with the purpose to intimidate or with knowledge that the offense would intimidate an individual or group of individuals “because of race, color, religion, gender, disability, sexual orientation, gender identity or expression, national origin, or ethnicity” [2] or any other protected class status identified in the University’s non-discrimination policies.

It is important to note, however, that behavior or expression may be considered inappropriate or disruptive without being a bias-related offense or policy violation. After a bias-related incident is reported, the incident will be reviewed and evaluated by the appropriate campus office(s).

There may be times when it is difficult, if not impossible, to identify the person responsible for the reported incident or behavior, or when the individual is not a member of the Stockton community and, therefore, is not subject to University codes or policies.  There may also be times when the reported incident is ultimately determined not to be a policy violation.  None of these situations precludes the University from implementing an educational and supportive response. Counter-messaging, condemnations, dialogue, education and support in the form of teach-ins, open forums, and residence hall meetings are just a few examples of how a University community can respond to hateful behavior and speech inconsistent with Stockton’s mission/vision/values.

While it isn't always easy to recognize, bias can be present in the classroom, workplace, and media, and often stems from fear, misunderstanding, hatred, or stereotypes. Even when offenders are not aware of bias or do not intend to offend, bias may be revealed by an act that is worthy of a response and can serve as an opportunity for education.

What is a hate crime?

A hate crime is a criminal offense in which the targeted individual was intentionally selected because of the perpetrator’s bias.

In New Jersey, hate crimes are defined under N.J.S.A. 2C:16-1 Bias Intimidation.  Pursuant to that statute, a person is guilty of the crime of bias intimidation if the individual commits, attempts to commit, conspires with another to commit or threatens the immediate commission of an offense specified in chapters 11 through 18 of Title 2C of the New Jersey Statutes; N.J.S. 2C:33-4; N.J.S. 39-3; N.J.S. 2C:39-4 or N.J.S.2C:39-5,

While bias incidents and hate crimes involve behavior motivated by bias, there is an important distinction between the two.

Hate crimes are criminal offenses motivated by bias. These crimes would be crimes even if not for the bias element.

A bias-related incident may not involve criminal behavior. It may or may not be a violation of University’s codes of conduct or non-discrimination policies because not all behavior perceived to be biased or hateful rises to these administrative levels.

What are examples of hate crimes?

Some bias incidents or hate crimes may involve hateful speech. Hateful speech, like all speech is protected by the First Amendment provided the speech does not incite immediate violence. That does not mean, however, that hateful speech must be tolerated. Hate speech can still cause real harm.

For a deeper explanation of free speech and what you can do, click on the following resources.

When should I report?

The sooner you report an incident, the greater likelihood that you will remember important information and details.

How do I make a report if I witnessed or was the target of a possible bias-related incident or hate crime?

What information should I include in the incident report?

You will likely be asked to recall the following information, but don’t let the absence of such information deter you from reporting.

Who will investigate a report of a possible hate crime and bias incident?

Several campus offices are responsible for processing incident reports when the report implicates the State of New Jersey criminal codes, the University’s code of conduct or the University’s non-discrimination policies.

University offices receiving reports consider privacy and due process rights of those involved.

What if I am concerned about my safety as the result of reporting an incident?

Stockton University prohibits retaliation (including, but not limited to, intimidation, threats, coercion or discrimination) against any individual who reports a potential crime or violation of a University policy or code or who assists in providing information related to a report.

Who should I contact if I require supportive measures?

Supportive measures regarding bias incidents or hate crimes may be requested through the Dean of Students for students and the Office of Human Resources for employees.

Bias-related behaviors can be greatly reduced, if not eliminated, with your help. When you recognize an act of bias, first and foremost, your safety is the priority.

If a situation arises where you feel comfortable safely interjecting or intervening, here are some strategies to consider:

Other Resources for Information on Hate Crimes, Bias Incidents, and Free Speech

* The Information, Questions, and Answers that appear on this web page were modeled after Rider University’s Bias Incident Response Protocol web page. We thank Rider University for granting permission to do so. 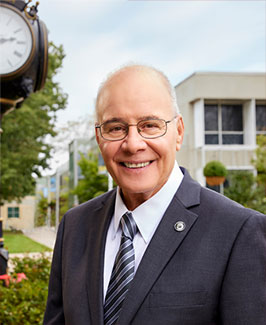 Please join me in reaffirming our commitment to sustain an environment where everyone feels welcome, safe, and supported. Stockton will always be committed to providing an environment of inclusiveness; where we value individual differences, and recognize how important having a diverse faculty, staff and student population is to the success of this institution.

Our community must do all it can to promote civility and respect when interacting with one another. Civility and respect promote the free exchange of ideas, and that is the hallmark of a great public institution of higher education.