The Day the Trees Came Down

The groundbreaking for Stockton State College took place on December 9, 1970 (50 years ago at the time of this writing). The 1600-acre site, covered in large part by oak-pine forest, was deep in the New Jersey Pinelands. The college, now university, has always taken pride in its natural setting and its stewardship of this remarkable ecosystem. In the way that growth rings accrete year after year, providing details of a tree’s existence, the expansion and renovation of buildings on our campus tell a story of Stockton’s growth.

With the creation of ever more parking lots and additional buildings—the Arts & Science building, Big Blue, West Quad, the new apartments, new science buildings, and more—Stockton has grown, no longer the small woodsy community of the 1970s. As additional buildings became necessary, the forests on our campus have been impacted. The Campus Center, a fairly new addition to Stockton, opened its doors on May 7th, 2011, on Commencement Day. The facility has enriched campus life for students and made the University more marketable.

Without a doubt, the Campus Center enhanced the social and cultural space for students; as well, it provided a convenient location for student services. Its large footprint, however—154,000 square feet—necessitated the destruction of a small forest, approximately seven acres, which grew between parking lots 1 through 5 and the spine of the original academic buildings. Though removing these trees was necessary for the development of the ever-growing university, the elimination of all this forest space was a bittersweet moment in the school’s history. The University gained a magnificent student center, but it lost familiar trees which most of the community walked past and through daily. This necessary loss is remembered by some as “The Day the Trees Came Down.” 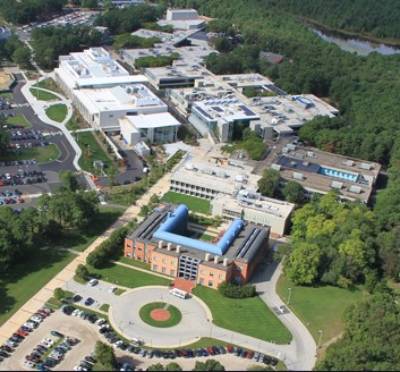 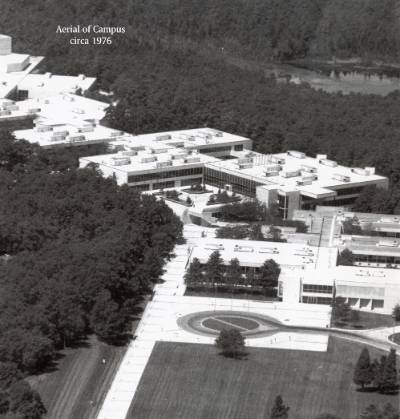 Prior to the existence of the Campus Center, several pleasant walkways allowed campus visitors to walk through a lightly shaded forest—anyone who parked in the lots had to walk through the trees. This was not an area of dense, impenetrable woods; the oaks and pitch pines, especially at the academic edge, were spread thinly enough to invite relaxation and socializing. Nick Leonetti, who attended Stockton as an undergraduate (he is now an adjunct professor at Stockton), commented on the area before the trees came down: it had “a very pastoral sensibility.” He stated, “I love the Campus Center … but it was nice on a beautiful day to go outside and read a book under a tree, or have a picnic or have lunch by the trees.” You could relax and appreciate the warm sun on a nice day. Students would spend time lounging alongside the trees or playing frisbee close by with friends. There are, of course, still hundreds of acres of trees surrounding the campus today, but students can easily avoid them—and some do—or never find the time to explore them. There was something special about having to walk on the wooded paths every day to go to class. It was an aspect of Stockton life that was cherished by many.

Leonetti suggests that many students were upset to hear that the trees would need to be cut down. He remembers hearing clear disapproval among some students. “There were a lot of people in the environmental science program who were upset that they were taking these trees down. Some of them were quite old and had been there for a really long time.” When asked how he himself had felt about losing the trees, Leonetti candidly replied. “You know,” he began, “I wasn’t appalled by the idea because I understood—I got it. You have to expand. If you want more students you have to expand. I think I was more saddened by the idea that they were doing it because, like I said, that is now just a snapshot in history, and newer, future students can’t experience the way that Stockton was prior to all this expansion.” Although Leonetti was in his senior year at the time, he was well aware of the loss the Stockton community would soon experience.

Louise Tillstrom, Principal Library Assistant, who has worked in the Stockton University library for several years, was on the night shift when the trees came down. She remembers it like it was yesterday, and created a photographic chronicle of the machines that cut down the trees, nearly to the roots. Louise’s pictures include the campus before and after the machines buzz-sawed their way through the inviting forest to make way for the Campus Center. In these wooded photographs, the campus is nearly unrecognizable to today’s students, who have to squint to orient themselves and recognize which wing is which behind all those trees.

As Louise remembers it, the trees came down over the summer, and when everyone came back to campus, it looked naked. “It was very weird,” she said. “It was nice walking through the woods every day to campus. It was cool to walk in between the trees on a pretty nature path.”

Eric Anglero, a Stockton alum, shared a similar bittersweet experience when arriving on campus as a freshman resident in early 2009. Eric remembers the excitement of seeing the yellow caution tape unroll around the section of trees and parking spots that would become the Campus Center by the time he graduated. He was excited to see expanded dining options, but he regretted the loss of precious parking places that he used as a commuter student.

“It’s funny,” Eric remembers, “I went through so many stages of Stockton. When I was there, the Campus Center was being built and then finally completed.” Enrolled in the American Studies master’s program following his undergraduate history degree, Eric was able to see the Center open before leaving Stockton and now admires the “great space” the building became.

What was formerly an easily accessible community forest has been replaced by the sleek, contemporary-designed Campus Center. Where the paths through the forest, trod daily by most of the Stockton community served as a common experience, the Campus Center plays a related, if slightly different role. It too builds community, with the grand hall serving as a kind of living room for the university. Whereas students formerly lounged under or next to trees; now they sit in comfortable chairs, books (or phones) in hand, reading or chatting with friends. And on rainy days, there is no need to rush down puddled paths to B-, F-, or J-wing. Students need only to enter the Campus Center to find friends and begin their Stockton day. Today’s students may not experience the joy of walking through Stockton’s forested paths whenever they arrive at school, but so too yesterday’s students could not sit by the fire as they chatted with friends, or enjoy the morning camaraderie of the long, but friendly Dunkin’ Donut line.

The Campus Center has become the heart of the campus, with space enough for the event room, the theater, the career center, student accessible meeting rooms, the visitor’s booth, the bustling food court, and a coffeehouse with pool tables, foosball and a second fireplace. Room to live, indeed.

Many in the Stockton community were saddened by the loss of the trees, but the addition of the Campus Center has been welcome and, at times, exciting. As Nick Leonetti has pointed out, in order to expand the school, some aspects of old Stockton could not be maintained. Today, it is hard to imagine Stockton without the central Campus Center, with the tree-shaped pillars of its Grand Hall towering proudly over the school’s official logo. Perhaps it is debatable to say that the day the trees came down was a depressing time. One natural entrance into the campus simply gave way for another, more modern entrance. One would hope that at an institution of higher education, adaptation and development would be valued and appreciated.