A groundbreaking for the Phase II Residence Hall at Stockton University Atlantic City in October brought together the myriad of partners helping to make the expansion a reality.

Gov. Phil Murphy told the more than 200 guests at the outdoor ceremony held in O’Donnell Park, across from the Stockton Atlantic City campus, that he couldn’t wait to see this take shape. “It will create good jobs today, help prepare the next generation, and diversify the economy of Atlantic City.”

Demolition began on the Eldredge Building in Atlantic City in June to make way for the Phase II Residence Hall.

The project is being developed in partnership with the Atlantic City Development Corp (AC Devco). Jingoli is the general contractor and construction manager. It is expected to open to students in Fall 2023.

Pictured above, Gov. Phil Murphy celebrates at the groundbreaking for the Phase II Residence Hall at Stockton University Atlantic City.

Leamor Kahanov has been named the new Provost and Vice President for Academic Affairs at Stockton University.

Kahanov comes to Stockton from SUNY Oneonta where she serves as Provost and Vice President for Academic Affairs. In her current role, she is their chief academic officer, and oversees four schools as well as the library, registrar, grants and Academic Student Services.

“Dr. Kahanov’s experiences as a faculty member, department chair, assistant dean, dean and provost will be of great value to Stockton, and we are excited to have her join our community,” President Harvey Kesselman said.

A new Cannabis & Hemp Research Initiative at Stockton University (CHRIS), announced in April, will provide education, research and resources for the local and national market.

The initiative builds on the Cannabis Studies academic programs at Stockton to develop research focusing on hemp cultivation practices, non-medical cannabis research, lab testing and the creation of hemp and cannabis educational materials

“As the first university in New Jersey to offer a Cannabis Studies minor in 2019, Stockton is poised to do important research into areas that can provide opportunities for our students and emerging industries, and enhance the economy of the state,” said Professor of Biology Ekaterina Sedia, coordinator of the Cannabis Studies minor. 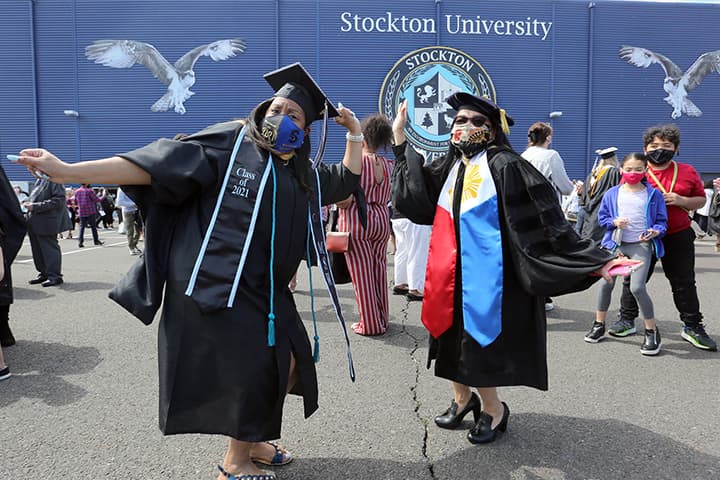 They waited five months to do it, but nearly 1,000 members of the Class of 2020 at Stockton University finally got to walk across a stage and hear their names announced as Stockton hosted eight separate socially-distanced Commencement ceremonies on the Galloway campus Oct. 23, 2020.

The eight smaller ceremonies were held on alternate hours at two outdoor locations on the Galloway campus. Chairs were spaced six-feet apart and face coverings were required.

President Harvey Kesselman referenced the different set-up when he spoke to graduates, “We are socially distant, but we are no less connected. We are joined in fellowship to celebrate this long-awaited moment.”

For the Spring 2021 Commencement ceremonies held May 11-13, perseverance, resilience and optimism were the themes that stood out.

More than 2,000 graduates participated in the 12 COVID-19-safe ceremonies over three days in the Sports Center, with a few family members cheering them on in person, and others watching the livestream.

He replaces Margaret “Peg” Slusser who founded the Bachelor of Science in Health Sciences in 2012 and retired this year.

The teaching and writing of Stephen Dunn, Distinguished Professor Emeritus of Creative Writing, inspired thousands of students and poetry lovers. He passed away in June on his 82nd birthday.

Dr. Dunn joined Stockton in 1974, a young professor at a young college, where over a career that spanned more than 40 years he helped define a Stockton education. In 2001, he was awarded the Pulitzer Prize in Poetry for his book “Different Hours.” He wrote 15 collections of poetry and received numerous awards, including the Academy Award in Literature from the American Academy of Arts & Letters, and fellowships from the Guggenheim and Rockefeller Foundations.

He served twice as president of the board, from 1994-96 and 2001-2004, and served under three of Stockton’s five presidents, Vera King Farris, Herman Saatkamp and Harvey Kesselman. He had also served on the Stockton Foundation board.

In December, the Board of Trustees room in the Campus Center was dedicated in memory of his service to Stockton.

Lynn Kramer, a long-time supporter of Stockton and many important community causes, passed away March 1 at age 78. The Kramer family has played a critical role in supporting the University through their philanthropy and volunteer service. Lynn and her husband, Charles, a member and former chair of the Foundation Board of Directors, have made significant contributions to Stockton including the dedication of Kramer Hall in Hammonton, the establishment of the Arnold and Gertrude Kramer Endowed Scholarship Fund, the dedication of the Kramer Veranda at Stockton University Atlantic City, and generous event sponsorships and other gifts supporting students and scholarships.

She served as Chief Financial Officer for Kramer Beverage Company, the beer and beverage distributor founded by Charles' grandfather Ben Kramer, for more than 30 years.

Dr. Jo Frances Stow, former faculty member and long-serving member of the Foundation Board of Directors, passed away Feb. 9 at age 93.

Dr. Stow served in many roles at Stockton for nearly 50 years. She taught Public Health courses from 1979-1988 and was tenured in that program, retiring as associate professor. In 2013, she was awarded Emerita status by the Foundation Board.

She was an active member of the Foundation’s Scholarship Selection Committee for 30 years, serving as Chair and Co-Chair. Dr. Stow worked tirelessly to attract financial resources from the community to support students. She was also extraordinarily generous, establishing the Frances N. Christian Memorial Scholarship for Nursing students, the Col. Kenneth R. Stow U.S. Military Veterans Scholarship, and the Dr. Jo Frances Stow Scholarship for Public Health.