Galloway, N.J. _ They waited five months to do it, but nearly 1,000 members of the Class of 2020 at Stockton University finally got to walk across a stage and hear their names announced as Stockton hosted eight separate socially-distanced outdoor Commencement ceremonies on the Galloway campus Friday.

“It’s his master’s degree – I wouldn’t miss it for the world!” said Yvonne Ford of Jackson of her son Sean, a Smithville resident who earned his Master’s in Business Administration and posed for photos with his mom and father, Patrick. 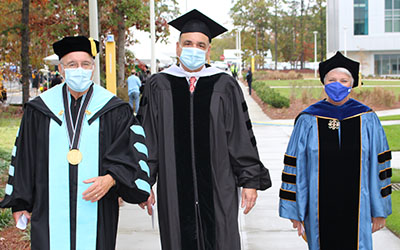 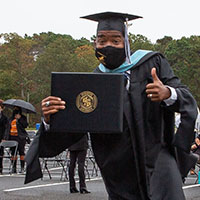 The eight smaller ceremonies were held on alternate hours at two locations on the Galloway campus.  Chairs were spaced 6-feet apart and face coverings were required.

“Yes, our ceremony set-up looks different,” said President Harvey Kesselman. “We are socially distant, but we are no less connected.  We are joined in fellowship to celebrate this long-awaited moment.”

He told the graduates that while “things happen” that are unexpected, they must remain flexible and adaptable to thrive. He noted that their return to campus was about much more than being handed a piece of paper.

“It’s about an idea, symbolic of your stick-to-itiveness, your determination, your persistence, your resolve.” 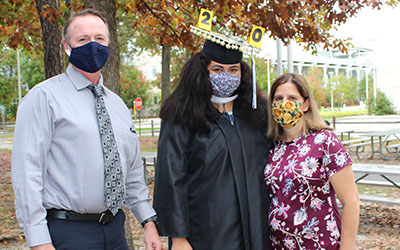 Zakiya Smith Ellis, chief policy advisor to New Jersey Gov. Phil Murphy and former N.J. Secretary of Higher Education, who was scheduled as the keynote speaker in May at Boardwalk Hall, spoke at the 3:30 p.m. ceremony.

“Today this is not the commencement we all envisioned would be the understatement of the year,” Smith Ellis said. “We are all making sacrifices and living a life we never imagined. And all of it can be a bit exhausting.”

But, she noted, that this year has also proven that the Class of 2020 is prepared for anything.

“What you have been through this past year means you can weather any storm,” Smith Ellis said.

For the graduates, the event was an opportunity to reconnect with friends they may not have seen since March, and get official graduation photos on campus. 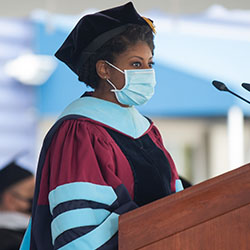 “I came to see all my friends again,” said Erin Kenney of Washington Township in Warren County, who stopped for photos with Andie Labb of Pennsville and Neil McCarthy of Salem. The Hospitality Studies major is working as a nanny right now, but hopes to get a job in her industry as pandemic subsides.

Na’Tiasia Morales-McClendon, a native of Buena, returned from her job as a counselor at a college in North Carolina to join her family for the celebration.

“I’m walking for me, my parents, my entire family,” she said. “This is bigger than me. I wouldn’t be here if not for them.”

Hospitality Studies major Breanna Betts of Manchester also said the ceremony was an important rite of passage to share with her parents.

“I was a first-generation college student,” Betts said. “I’m the first in my family to get a bachelor’s degree.”

A job offer from a casino fell through when the casinos closed during the pandemic and she is considering starting a master’s degree while waiting for the job market to bounce back.

Board of Trustees chair Raymond Ciccone, Class of 1979, welcomed the graduates to “our community of over 55,000 Stockton Osprey alumni, representing Stockton throughout the United States and beyond.”

Videos of the eight ceremonies can be viewed on the Stockton Commencement page.