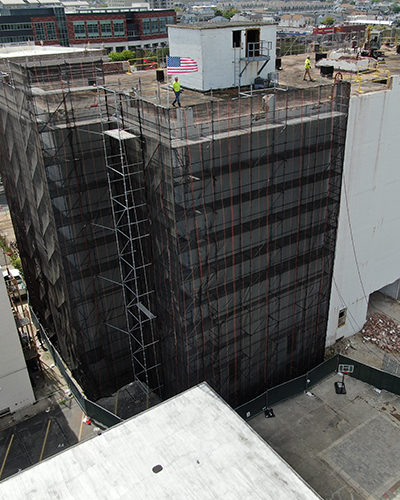 Galloway, N.J. _ Demolition has begun on the Eldredge Building in Atlantic City to make way for the Phase II Residence Hall for Stockton University Atlantic City.

The project is being developed in partnership with the Atlantic City Development Corp (AC Devco). Jingoli is the general contractor and construction manager.

Because of its proximity to neighboring structures, the building is being demolished floor by floor and work is expected to last through the summer. Excavation and foundations should begin by the fall.

“We are thrilled that the project is making progress and look forward to welcoming students in the fall of 2023,” said Donald Hudson, vice president of facilities and operations at Stockton University.

The new building at Atlantic and South Providence avenues will be a 135,000-square-foot, six-story,  416-bed apartment style residence hall across from O’Donnell Park and adjacent to the Stockton Atlantic City campus in the University District. The $70 million project will be primarily financed by bonds issued by the Atlantic County Improvement Authority and a $10.3 million loan from the Casino Reinvestment Development Authority.