Bass River Township, N.J. – The late Stockton University Professor Rudy G. Arndt of Galloway Township was one of a kind, and so is the boat named after him. 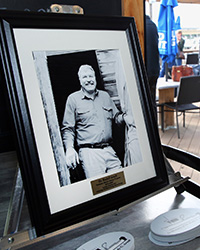 The R/V Rudy G. Arndt, a shallow draft research vessel, was formally dedicated in a ceremony at Breeze’s Dock Bar & Grill on May 24. The custom boat has already been out on the water with Stockton Marine Field Station Director Steve Evert and marine science students. 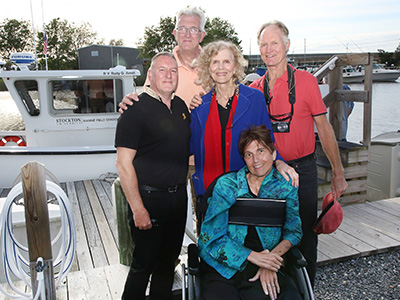 “We went right to using it to support our classes,” said Evert of the boat that arrived in March. “A great part of our program is bay studies and you need a shallow draft boat. This one is larger than most and can carry 10-12 people so we can take more students out.”

Funds for the boat were gifted to Stockton by Arndt’s sister, Judy Arndt who stipulated they be used to buy a new marine vessel for the School of Natural Sciences and Mathematics at Stockton.

Arndt and her husband Alex Oppedyk, who live in California, traveled to Stockton with cousins Maja and John Field and Chris Wasserbach of New York to see and formally dedicate the boat. About 100 people attended the event, touring the board and viewing the student research project posters on display on the deck at Breeze’s.

“We love the ocean, and Rudy loved his work, and I just wanted to do something to honor him,” an emotional Judy Arndt said. “This will keep his name alive. It is his legacy.” 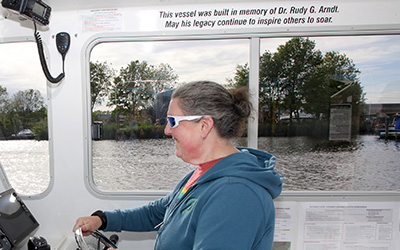 Born in Germany, Arndt emigrated to the United States as a child with his family in 1950. He studied at Cornell University and Queens College and joined then Stockton State College in 1974, where he spent more than 30 years helping to build the then fledgling college’s biology and marine science program until his retirement in 2007 as a Professor Emeritus. He also established a scholarship in memory of his mother, Meta Arndt to assist students and he continued to advise and visit Stockton until his death in 2019 at the age of 77.

“We were all his students,” Evert said of Arndt. “He never stopped exploring and teaching.”

“He was determined that students would be supported,” Nugent said. “This boat meets the expanding needs of our students who will now have the opportunity to learn about Rudy Arndt.”

Stockton Dean of the School of Natural Sciences and Math Peter Straub recalled Arndt’s dedication to students and marine sciences. 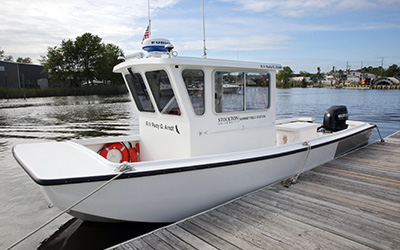 “Rudy devoted his career to building a legacy of excellence in marine sciences,” Straub said. “This gift will support a new generation of students.”

Evert recalled taking a rose after Arndt’s funeral and carrying it with him on Stockton’s larger boat, the R/V Petrel until it was wilted and falling apart.

“I’d look at it and think of Rudy,” he said. “Then one day, I decided it was time to set it free, so I stopped the boat and let it go. That night I got home and learned that Judy had called to discuss a gift. That gift is floating behind us. It is a purpose-built research boat and I hope you are proud of it.”

Evert also gave Arndt a framed collage of photos of Rudy. The back matting was signed by former students, staff and colleagues.

“I hope it reminds you of this fine day,” Evert said and the horn on the boat sounded three times for the official dedication.

Stenciled on the boat are the words: “This vessel was built in memory of Dr. Rudy G. Arndt. May his legacy continue to inspire others to soar.”

Arndt, fighting tears, thanked Evert and Stockton for bringing her dream for her brother to fruition.

“I hope this boat inspires many students for years to come,” she said.

- Story by Diane D'Amico, photos by Vernon Ogrodnek/Nicholas and Partners