William Gay, former Pittsburgh Steeler, is addressing the audience during the last event in the series.

Galloway, N.J.- The topics of consent and interpersonal violence (IPV) are too big for just one perspective. So, Tierra Houston of the Women’s Gender and Sexuality Center (WGSC) brought three speakers to Stockton University this month to share a range of viewpoints.

Through the state-funded GEER II Grant, Houston has been empowered to, essentially, empower students of color with knowledge surrounding power-based personal violence (PBPV). PBPV is an umbrella term that encompasses domestic and interpersonal violence, stalking, sexual assault and more. 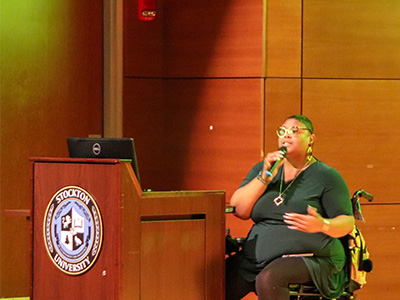 Through this knowledge, Houston hopes to also increase reporting instances of PBPV among students of color by 25% since statistics show that power-based personal violence happens more frequently in communities of color. She explained the socio-economic challenges that these communities face, such as stigma surrounding reporting and even fear of the police once a report has been made.

“This is a hard subject for people to even want to talk about, but it’s especially harder in communities of color because we’re all told that ‘What happens at home, stays at home.’ We want to break that,” Houston shared. “Our goals with these programs are education, prevention and awareness of PBPV in our lives.”

This month’s presentation series also touched on another one of her goals: combating the stigma around the WGSC and its services for male students, who rarely even look inside the center.

“I really want to emphasize that this is not just the ‘women’s center,’” Houston said. “If you’re an ally, you are more than welcome to be in the lounge. And if you need some help, you can come here for it.”

I Can Tell You Got Big “Consent” Energy: Emphasizing Black Culture in IPV Prevention and Education

Houston was excited about the first program centering on the topic of consent because she was a fan of Shanese McGregor, the first presenter on Nov. 2. McGregor is popular for her interactive presentations that center culture in conversations surrounding IPV.

“She talks about Black culture in IPV prevention and education because programs like this, especially at PWIs (predominantly white institutions), aren’t usually geared toward Black culture,” Houston said. “Colleges and universities bring in Black, Hispanic and Indigenous people, but the topics sometimes aren’t geared toward the cultures of those they’re trying to serve.”

McGregor’s presentation focused on the gray area of consent, where “yes” doesn’t always mean “yes” or “no” meaning “no” at the moment.

“We all know, with consent, that ‘yes’ should mean ‘yes’ and ‘no,’ ‘no,’” Houston explained. “What some of us don’t know is how to navigate when someone’s ‘yes’ really means ‘no.’ Everyone communicates differently.”

A Call to Men: Healthy versus Harmful Ideas of Manhood

Once Houston heard guest speaker Jeff Perera’s TEDx Talk on YouTube, she knew that he needed to come to Stockton. 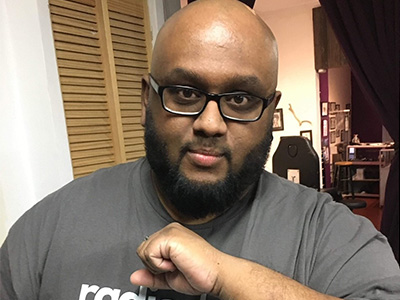 Perera believes college-aged men are more often than not taught toxic masculine ideals about their gender, so his presentations address healthy ideals and how to achieve them.

“There are things that our young men learn that could be healthy can also be harmful,” Houston said. “Like, yes, you should be aggressive in pursuing your goals and dreams, but you don’t need to be aggressive in your relationships with women or children. Harmful ideas like men can’t cry or show emotions without being a ‘punk’ or ‘soft’ are the ideas that he’s trying to attack within our communities.”

Ultimately, Perera discussed how gender equality and healthier ideas of manhood are about “being better teammates” and a conversation of us, not us versus them.

He did this by talking with Stockton students on Nov. 9 about building “emotional muscle” which is “developing the emotional well-being, literacy and agility to identify and address challenges that come up for us as men and young men, as well as develop a circle of peer-supports to spot one another in that development.”

“As men, we can build our emotional core muscles of values and integrity, developing emotional muscle memory through repetition, conditioning and practice as we strive to be allies to women and gender-expansive people,” Perera said.

A Fireside Chat with William Gay 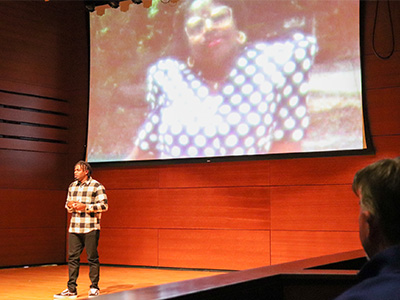 William Gay, with his late mother, Carolyn Hall-Bryant, behind him.

William Gay, former Pittsburgh Steeler, brought something different to the table for November’s events: his perspective on interpersonal violence was shaped as a youth.

Gay’s mother was murdered by his stepfather when Gay was only 7 years old. This sent him on a journey of processing her death while navigating school and a career in football. He is now known as one of the NFL's top speakers on domestic violence prevention and education.

His story struck Houston, who believed that students may relate to him on another level than the other speakers.

“PBPV looks different everywhere,” Houston said. “I really wanted to show the students different avenues of PBPV, and I really like that we have two men coming into the conversation because it can happen to anyone. He discussed how he overcame his situation.”

Gay’s Nov. 15 presentation did all that and more: even though football provided him with an outlet to release his anger and frustration at his mother’s death, it took him telling his mother’s story to someone else for him to begin processing those emotions.

“I’m making sure that everyone knows about my mother, Carolyn Hall-Bryant, and I do this because I didn’t earlier from selfishness,” Gay said. “When I started talking about it and telling people the story and how it affected me, it made me a man. It allowed me to find myself and play a lot better because it freed my spirit.”

-Story and photos (of William Gay) by Loukaia Taylor