University alumni and friends donated $2,977,615 during the 2021 fiscal year. These are just some of the many notable gifts to the Stockton University Foundation this past year:

From serving as a Student Senator, a brother of Kappa Sigma, and a Resident Assistant to holding a position as a Student Assistant in the Office of the Dean of Students & Financial Aid, Carl Archut Jr. ’16 made the most out of his undergraduate experience at Stockton University.

Now serving as the associate director of Development for University Initiatives at the University of Florida, Archut credits his undergraduate experiences for his continued interest and career in higher education.

“When I first started at Stockton, I didn’t know where I wanted to end up in life, but what I did know was that I wanted to help others,” said Archut. “And through my involvement as a student leader I discovered how I could make my goal of helping others a reality by working in higher education.”

Behind his ambition and motivation to give back and pay it forward for others, is a special driving force: Jenelle T. Archut, his grandmother, who he lovingly refers to as “Mom-Mom.”

“My Mom-Mom was one of the first to be there for my Dad when my mother left,” said Archut. “From that moment on, she played an incredibly active role in our lives.”

Inspired by his grandmother’s generous spirit and unwavering support, Archut established the Jenelle T. Archut annual scholarship in 2018, and in 2020, pledged a gift for $25,000 to create an endowed scholarship in her honor.

Professor of Marine Biology Matthew Landau and his wife, Brenda, an adjunct professor in the same field, have taught at Stockton University for more than 30 years and know the educational value of student research.

But they also know the time and cost of doing research can create barriers for many students, who may already be juggling a job along with their coursework.

The couple created the Marine Science Faculty Research Scholarship for Underrepresented Groups to assist a student from a traditionally underrepresented and underserved population in pursuing a research project under the guidance of a Marine Science faculty member. The annual $3,000 award will help fund supplies and travel related to the research.

In establishing this fund, the Landaus hope to play a small role in increasing the diversity of marine science students while also removing some of the financial barriers.

“We wanted to do something to promote interest in the earth sciences, but also help the best students do research,” Matthew said.

The couple is targeting typically underrepresented students to help promote role models who can inspire others to consider marine science as a career.

The daughter and son-in-law of Holocaust survivors endowed a $25,000 scholarship fund at Stockton University to assist students interested in Holocaust and Genocide Studies.

Ann and Howard Rosenberg created the Jadzia and David Greenbaum Memorial Scholarship to honor Ann’s parents, who met and fell in love in a displaced person’s camp in Germany after World War II.

Natives of Poland, the Greenbaums survived labor and death camps and later immigrated to America, settling in New York City. In 1951 they bought a chicken farm in McKee City.  In 1957 they moved to Atlantic City, then in 1978 moved to Margate. During those years they built a successful construction business and raised four children.  Jadzia was an active member of the Sara and Sam Schoffer Holocaust Resource Center Executive Committee at Stockton.

Last summer their daughter Ann, and her husband, Howard, who live in Toledo, Ohio, visited the Holocaust Center during a trip to Atlantic City.

Rosenberg said her father never talked much about his experience during the war, but her mother did.

“I knew they were both Holocaust survivors, and most of their friends were also,” Rosenberg said. “There were three families on our block who were all survivors.”

Howard Rosenberg spent a lot of time in his parents’ small grocery store on the corner of Rhode Island and Melrose Avenue in Atlantic City.

Rosenberg’s Market, originally founded by Howard’s grandfather, Max, in the early 1900s, no longer exists. But, Howard said one of the lessons his parents, Leroy and Henrietta, taught him was the importance of education.

The Rosenbergs endowed a second scholarship, a $25,000 fund to create the Leroy and Henrietta Rosenberg Memorial Scholarship at Stockton University to help Atlantic City High School graduates attending Stockton pay for their educations.

Howard said their goal in endowing the scholarships is not just to memorialize their parents, but also to help a new generation.

“We hope what we did might inspire others to create scholarships as well,” he said.

The Stockton University Foundation’s third Ospreys Give campaign raised just over $94,000 from more than 650 gifts to support Stockton students, programs and initiatives.

With Keeping Students First as the campaign’s focus, funds were raised for several initiatives and programs that will offer critical support and unique opportunities for Stockton’s student body including: the Social Justice and Equity Fund, the Military and Veteran Student Emergency Relief Challenge, the Student Relief Fund, Athletics, Community Engagement and Service Learning, individual academic programs and more.

“We know that many families are struggling, and we greatly appreciate the support of the entire community in helping our students continue on their paths to achieving their college degrees,” said Dan Nugent, chief development officer and executive director of the University Foundation.

Due to COVID-19, Ospreys Give was held entirely online and offered virtual activities and events for Stockton alumni, faculty, students, parents and friends to take part in, including a virtual 5K Fun Run & Walk and “Stockton Celebrity Squares.”

Find all the ways you can help support Stockton students through the Stockton University Foundation. 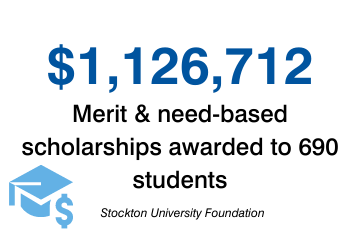 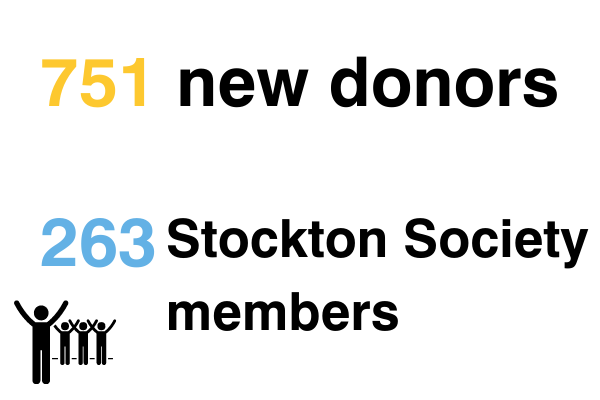 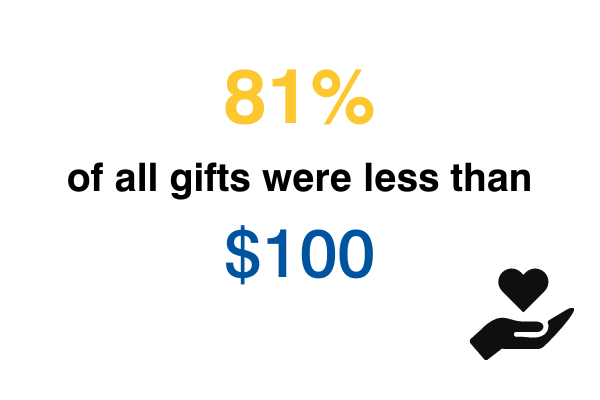