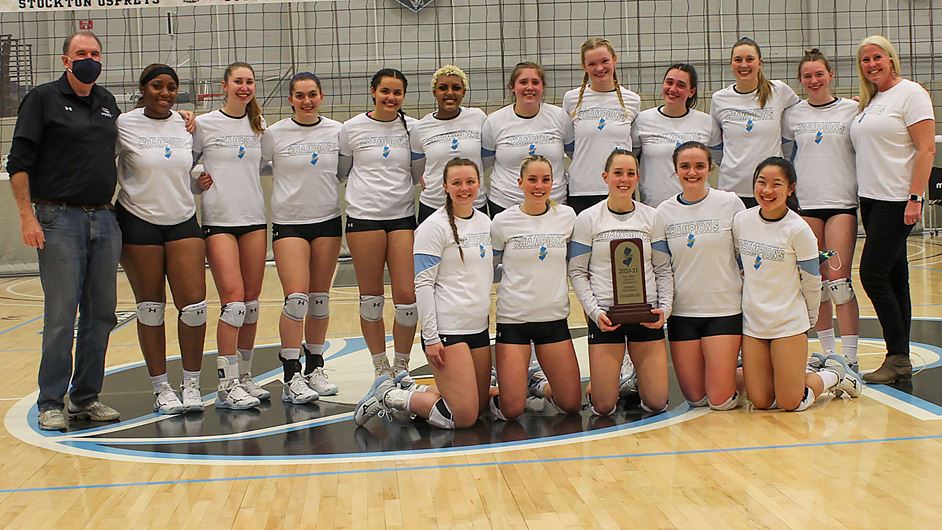 Stockton University captured the New Jersey Athletic Conference (NJAC) volleyball championship in March with a 3-0 triumph over Montclair State. Stockton won by scores of 25-12, 25-18 and 25-13 in winning their second consecutive NJAC title and 14th in school history.

Haley Green led all players with a career-high 14 kills, with Christie Louer registering a double-double of 10 kills and 10 digs.

Stockton finished with a perfect 7-0 record during the COVID-shortened Spring 2021 campaign.

The team collected two postseason awards and five all-conference honors from the NJAC. Senior Emily Sullivan was voted NJAC Player of the Year and selected to the NJAC First Team for the fourth straight time.

Allison Walker was chosen NJAC Coach of the Year for the second consecutive season and seventh time in her career. Walker guided the team to an undefeated mark and Stockton's 11th conference title in her 15 seasons on the bench.

A cool early-morning breeze swept across the bay behind the Atlantic City boathouse.  Rowing coach Joy Lynn Cress’s voice cut through the air as she prepared her group of young girls to board their boat for the morning’s rowing lesson.

“Never let go of a floating oar,” came the answer in unison.

As two rowers switched out of the coach’s boat to an eight-person boat, program coordinator Joe Maguire, men’s rowing coach at Stockton, watched the smooth transition.

“We would never have been able to do that with them for the first three weeks,” he said of the young rowers. “Not one kid had rowed before they came here. Now they have the confidence.”

Building self-confidence is just one of the goals of Stockton’s inaugural Summer Youth Rowing Program.  The free, six-week camp gave 33 middle school students from Atlantic City the chance to not just learn to row, but also to develop strength, self-confidence, discipline and teamwork – all starting at 7 a.m. four days a week.

The campers admit the early mornings are probably their least favorite part of the program.  But none gave up and many said they’d be back next summer.

The program was developed by a group of local rowing enthusiasts who wanted to give Atlantic City’s kids the chance to try the sport they love. Funds were raised so there was no charge to the students.

Dontae Loveland, a computer information systems major, went undefeated with 10 straight wins during the regular season and playoffs to claim victory for the Ospreys. 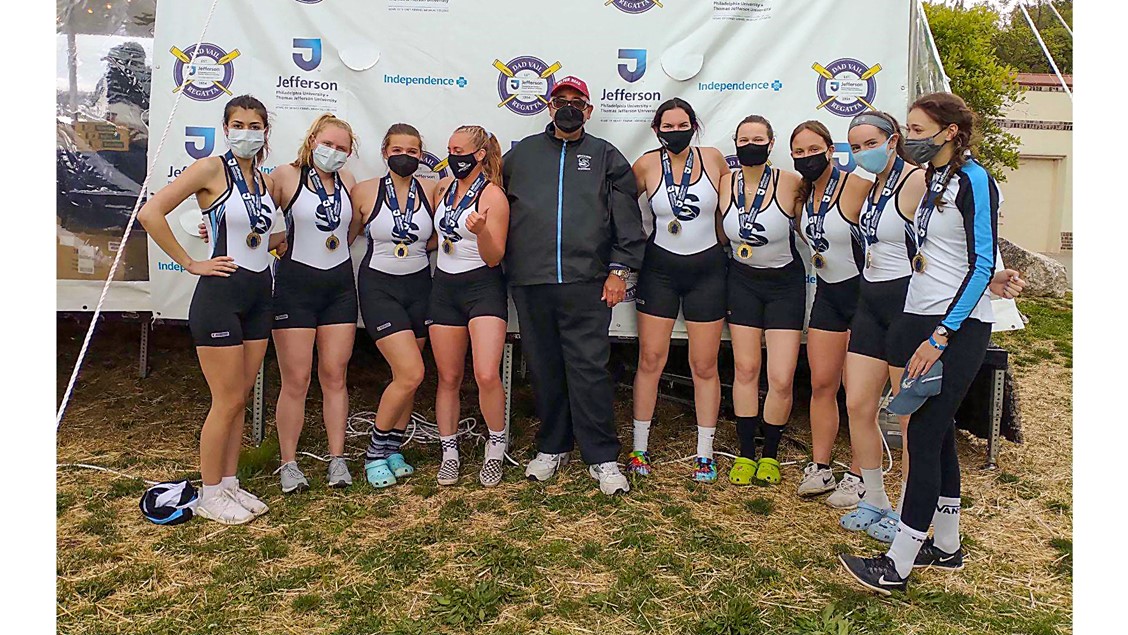 Stockton University finished third or higher to earn medals in all three events in which the Ospreys competed at the famous Dad Vail Regatta, highlighted by a history-making gold medal for first place in the varsity eight. Now in its 82nd year, the Dad Vail Regatta is the largest collegiate regatta in North America.

The varsity eight won the Division III Final by eight seconds, topping the field of four with a time of 7:07.660 to finish ahead of Marietta, Franklin & Marshall and Washington College. The gold medal is the first-ever by a Stockton varsity eight at the Dad Vail, marking another huge milestone for the women's rowing program.

The Osprey varsity four earned a bronze medal by placing third out of five in the Division II/III Final with a time of 7:59.271. Stockton finished behind a pair of Division II teams in Mercyhurst and Jefferson.

Stockton scored the last seven points of the game to upend previously-unbeaten The College of New Jersey (7-1) 65-58 and advanced to the NJAC championship game for the second straight year March 12, 2021. The 7-0 run snapped a 58-58 tie in a contest that Stockton led by as much as 18 points.

The Ospreys fell to New Jersey City University (NJCU) 79-77 on a three-point buzzer beater in the NJAC Championship game March 19.

Stockton led by 21 points with 14:36 remaining in the game but could not fend off a furious rally by NJCU and the final three-pointer.

Stockton repeated as the NJAC Tournament runner-up. The game marked the second time this season that NJCU edged the Ospreys on a shot at the buzzer, with both coming on the Gothic Knights' home court.

Stay up to date on all things Ospreys by following Stockton Athletics.
©