Atlantic City, N.J. — Alexandria Montalvo never thought artwork she helped create could have such an impact.

The senior Stockton University student put the finishing touches July 14 on a new wall mural in Atlantic City to honor four African American education trailblazers. The mural is one of two finished this week in time for the NAACP National Convention, which is taking place in the city for the first time since 1968.

“I’ve never done anything like this before,” said the 27-year-old art history and studio art major from Mays Landing. “Typically when I do art, it’s for myself and not for something as important as this. So, it’s really cool that I can tell people, ‘See that, I helped with that.’” 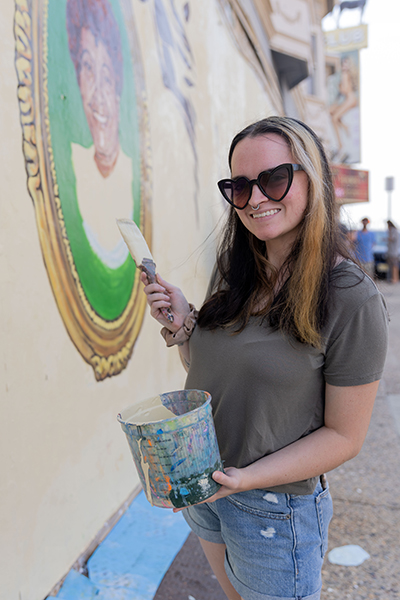 Montalvo is one of a few students who worked on the mural, a collaborative project between the Noyes Museum of Art of Stockton University, Create 48 and the Atlantic City Arts Foundation.

The second mural, by New York artist BK Foxx, depicts three different civil rights leaders – Martin Luther King Jr., Muhammad Ali and Fannie Lou Hamer – from photographs taken of them in Atlantic City. King stands on the Missouri Avenue beach, the only beach in Atlantic City open to Blacks in 1964. Ali visited a Nation of Islam temple in the 1960s, and Hamer’s photo is from her speech at the 1964 Democratic National Convention in Atlantic City.

Noyes Museum Executive Director Michael Cagno said the organizations got together with Brian K. Jackson, chief operating officer of Stockton’s Atlantic City campus, and Lisa Honaker, former dean of Stockton’s School of Arts and Humanities, to create something “to celebrate history on a local and global level.”

“When the conventiongoers come and they see these murals it will hopefully inspire them to take it back to the communities around the country and showcase not only people who are national icons, but people who made an impact on our local communities,” Cagno said.

The mural featuring local educators is located at the corner of Martin Luther King Jr. Boulevard and Atlantic Avenue.

“To be able to honor not one, but four women, who paved the way for people that look like me makes me very proud,” said Meekins, who owns the Dunes Gallery in Brigantine with Barbin. “Two of the educators actually taught my grandparents when they were in school, so I really feel connected to this project in many ways.”

Barbin and Meekins painted the mural inside their studio on a material called parachute cloth. The duo spent about two weeks creating different parts on five 5-foot-by-10-foot sections. Over the course of four hours the night of July 13, those cloth sections were glued to the wall in Atlantic City. Stockton students then painted the finishing touches.

Barbin said the cloth should last for several years, and this way the artists were able to create the mural quickly and without impact by weather.

As for the second mural, Create 48 owner Zach Katzen has always wanted to do something big with the photo of King because “it really showed MLK in a way that I’ve never seen him before – on the beach in a bathing suit, relaxed.” 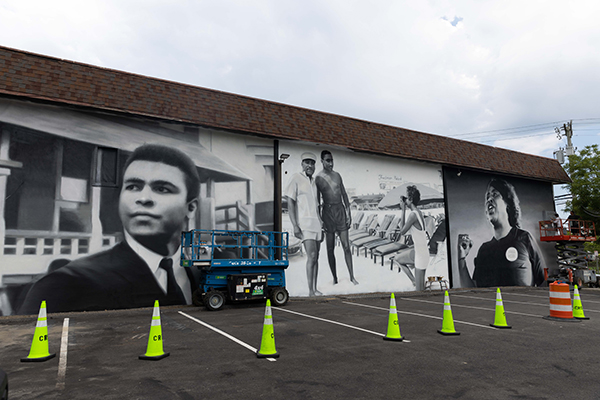 Katzen, whose company advocates for public art projects in Atlantic City, connected earlier this year with local historian Lester Muhammad at Stockton’s African American Cultural Heritage Short Course. Muhammad knew Ali and provided the photo used in the mural. And since Stockton had honored Hamer by naming an event room after her in the John F. Scarpa Academic Center, Katzen felt her photo would be the perfect final piece.

“The three images in this mural are all civil rights icons depicted during their time in Atlantic City, and a lot of people don’t even know that they were here,” Katzen said of the mural, which is located on the side of the future Good Dog Bar & Restaurant, just down the street from a new Stockton residence hall under construction at Atlantic and Providence avenues.

Katzen said it took about a week for Foxx, with assistance from artist Claudio Picasso, to complete the artwork, which was done completely by spray painting the building’s wall.

Cagno said the entire process has been a great experience for his interns.

“This gave them a taste about all the operational things that really aren’t sexy,” he said. ”It’s real-life skills for students who want to engage in the arts, whether as a studio artist or a museum educator or some type of community curator. They’ve gotten a chance to see what the process is like.”

Katzen said he’s grateful the project came together in time for the convention, and that Stockton could be a partner.

“These murals are a reminder to the people of this community that they come from a place of greatness, history and tradition,” he said. “A place that’s so much bigger and broader than they might realize. Amazing things have happened here, and they will happen again.”