Galloway, NJ – Tuition and fees at Stockton University will increase 2% for the 2022-23 academic year and summer 2024 session.

In-state full-time undergraduate students will pay $7,594 per semester for up to 20 credits, a 2% or $151 increase, under the tuition and fee structure approved by the Board of Trustees at their July 20 meeting at the Stockton Atlantic City campus.

“We remain committed to providing students access to high-quality education and services at an affordable price,” President Harvey Kesselman said.

Stockton offers several initiatives to help students complete their degrees in a timely and cost-effective manner.

The university’s flat-rate tuition plan allows full-time students to take up to 20 credits per semester at no additional cost, potentially saving thousands of dollars.

Room and board rates for 2022-23 were approved by the board earlier this year and vary based on the housing type and location and type of meal plan.

The board also approved the capital budget and a $258.7 million 2022-23 operating budget. The budget includes $25.3 million in student aid, including $23.2 million in scholarships and need-based grants.

Kesselman acknowledged the work of Heinrich to manage student enrollment throughout the pandemic and his contributions to the university during the past 26 years.

Nugent joined Stockton in 2018 as Chief Development Officer & Executive Director of the University Foundation. Since then, the Foundation’s assets have increased significantly to more than $60 million, and more than 3,500 new donors have supported the university. In his new role, Nugent will continue to helm Development and Alumni Relations responsibilities and will oversee University Relations & Marketing. 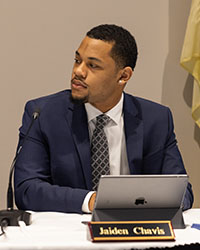 Kesselman also recognized the following members of the Stockton community:

At the close of the meeting, Kesselman announced he will retire June 30, 2023. He is the university’s fifth president, serving in the role since 2015. A national search for his replacement will begin later this year.