The 145 students get a summer job, free housing at the Stockton Atlantic City Residential Complex on the Boardwalk, and four college credits from a free career-readiness and leadership class. 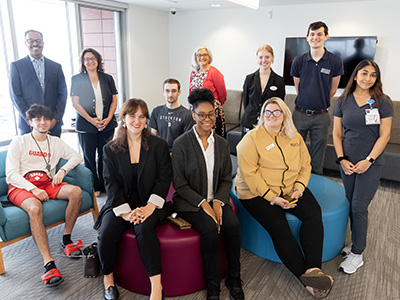 Stockton began the Atlantic City Summer Experience – Live, Work, Learnprogram this year to help local businesses and provide students with learning opportunities in the city and connect them with the community.

“This has been an initiative of our president, Harvey Kesselman, to connect more with the community,” said Stockton Atlantic City Chief Operating Office Brian K. Jackson, who began reaching out to businesses in February. A website was set up where students could get information on the jobs at each site and submit initial applications of interest.

More than 700 applicationsof interest were submitted to participate. Those approved worked directly with employers to get their jobs.

The program started with just three businesses, but soon grew to 12 as more asked to participate. Bob Ellis, vice president of Human Resources at Hard Rock Hotel & Casino, said they typically rely on foreign labor for summer help, but this summer, having 25 students from Stockton has been “a huge help.” An added benefit is they may want to stay on in the fall, or even make it a career.

“Some may not have their passion yet, but they will work a summer or two at Hard Rock and maybe they really fall in love with it. And we’ll be able to retain some of these students as time goes on,” he said.

Stockton Provost and Vice President for Academic Affairs Leamor Kahanov, who developed the program with Jackson, said that’s exactly what they hope will happen. 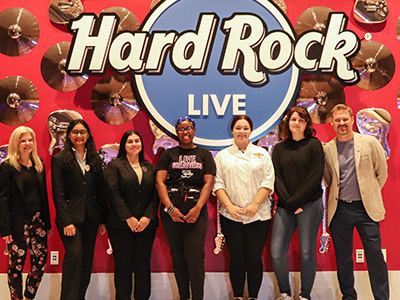 “This is a way to provide our students with experiences that will prepare them for the future, and that may include a career here in Atlantic City,” Kahanov said. She said students are working a variety of jobs in all areas of the businesses.

Students in the program recently shared their experience so far with N.J. Sen. Vincent Polistina and his Chief of Staff Joe Berg, who came to Stockton to learn more about it. Students said while the free housing on the beach was a major lure, so was the opportunity to get a job and a free college class.

“I was going to go home for the summer,” said Kayla Caputo of Columbia,  New Jersey, who is working as a casino account representative at Ocean Casino Resort. “But this offered free housing and I’m begin paid well.”

“I got a really good job,” said Michael Mora of Mt. Olive who is working as a supervisor at the Water Club at Borgata Hotel Casino & Spa. “I wanted to stay in an academic environment for the summer on campus, and the job is really fun.”

Lianna Beauchamps of Medford, who is working at Caesars, said she had wanted to stay over the summer to take classes, but didn’t think she could afford it until she learned about the program.

“I love learning and living here,” she said. A sustainability major, she wants to work in recycling and her job is giving her insight on large-scale waste issues. 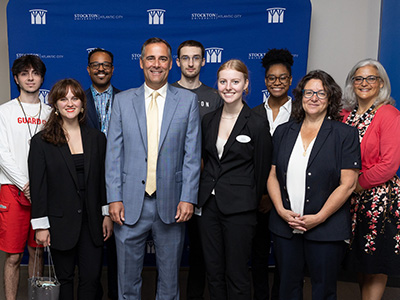 Brandon Strahl from Brooklyn,  New York., a business management major, is not only working as a lifeguard at Hard Rock Hotel and Casino but is taking five summer classes.

“I’ve been a lifeguard before so it’s an easy job for me and everyone is nice at Hard Rock,” he said. “I definitely did this so I could get the free housing.”

Both Brandon and Lianna also get a 20% discount on any additional classes they take because they are living on the Atlantic City campus.

Nashia Ara of Ventnor, a pre-med biology major, said she applied after AtlantiCare joined the program.

“I wanted to work in a hospital, but I had no experience,” she said. She received training to be a patient care associate, and said she is getting hands-on experience working with doctors and nurses.

“It’s a way to get my foot in the door and work with patients,” she said.

Destiny Craig, a native of Georgia, and Oliver Bruno of Egg Harbor Township, both got trained to work in the casino at Bally’s and said the money and experience have been good.

“This is the first time I’ve ever lived on my own and had to do my own shopping and laundry,” Bruno said. “And there are financial incentives from Bally’s to stay on after the summer.”

Several of the students interviewed said they have been told there would be opportunities to work parttime in the fall and again next summer.

Jailyn Jones of Mays Landing, a front desk supervisor, had worked at FantaSea Resorts before, and took advantage of the program to live near the beach and earn some extra college credits.

“I know I don’t live that far, but with gas costs today, it’s nice to be closer,” she said.

Overall, Ellis said he’s thrilled that Hard Rock could be part of the program, and he hopes it continues into the future.

“I think it’s just a win-win for everyone,” he said. “The exposure to working in this environment is a benefit to the students. It’s providing them with a base level of skills that they can take with them wherever they go. They can fall back on the experience working here no matter what profession they choose.”

More information is at stockton.edu/summer/atlantic-city-experience.