The newly dedicated Holocaust Rescuers Exhibition at Stockton University began as stories that Leo Ullman shared over many years with Gail Rosenthal, director of the Sara and Sam Schoffer Holocaust Resource Center.

Those stories of how ordinary people did extraordinary deeds to hide Leo Ullman and his family during the Holocaust are now an immersive experience curated by Michael Hayse, associate professor of History, and 17 students with university-wide support.

Leo Ullman survived 796 days as a hidden child in Amsterdam during the Holocaust with his "war family." The new Schimmel and Hoogenboom Righteous Remembrance Room was Ullman's dream to honor the heroes of his life. Two families, the Schimmels and the Hoogenbooms, chose to be upstanders and risked their lives to hide and conceal the Jewish identity of Leo Ullman and his parents in occupied-Amsterdam.

Thanks to Leo and Katharine Ullman's  generous gift, the stories Leo Ullman told can now be seen, felt and heard. Images that once lived in lonely photo albums are hanging on the walls. Memorabilia, including canisters, a chair and food ration stamps, are displayed alongside photographs of them in the attic where Leo's parents lived a silent life separated from their son for the duration of the war. A street view of Amsterdam wraps the windows giving visitors a sense of place.

Historian Michael Berenbaum, who consulted on the project, noted that few Holocaust stories are uplifting. In sharing stories of hope, courage and love, the Holocaust Rescuers Exhibition leaves viewers to think about what they would have done and what they will do when faced with moral choices.

Below is the story of the exhibition's yearlong creation.

Leo Ullman's parents made the difficult decision to temporarily leave their 3-year-old son to be raised by the Schimmels, a family they didn’t know at that time, for the duration of the war, which turned out to be more than two years, while they hid in an apartment attic with no heat, electricity or contact with their son. “Every footstep, car motor or noise could be the end of your life. You can’t replicate that utter and complete terror,” explained Leo Ullman. If the secret had been discovered, lives could have been lost. A crying baby could have unintentionally exposed the secret. Slide from an image taken on Jan. 2, 2019 to an image taken on Oct. 28, 2019 to see the transformation of the remembrance room. 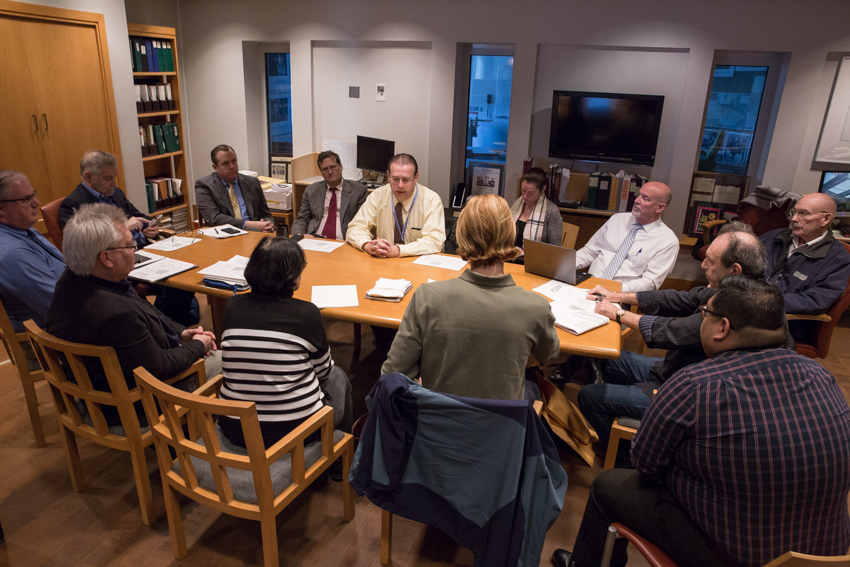 Staff at the Holocaust Resource Center worked closely with Stockton's Office of Facilities and Plant Operations and project consultant Michael Berenbaum, a Holocaust scholar and former Ida E. King Distinguished Visiting Professor. "We had teachers with numbers on their arms," said Gail Rosenthal, referring to herself and Michael Berenbaum while they were growing up and attending different schools in New York. When asked about the numbers, their teachers came up with answers like addresses, phone numbers or a game. "They didn't want us to know and upset us, but we had to solve the mystery," she explained. Since then, Rosenthal and Berenbaum have dedicated their careers to Holocaust education. The Holocaust Rescuers Exhibition brings a museum experience to Stockton and the community. 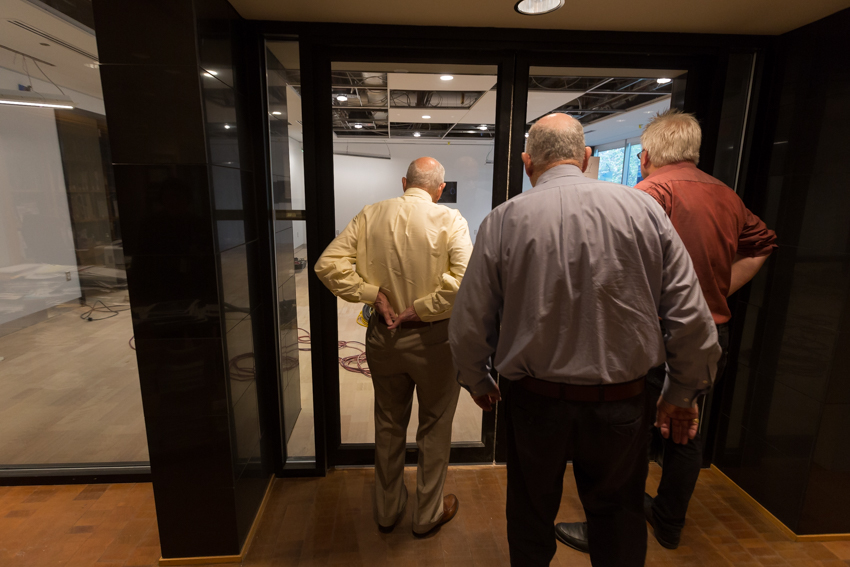 Leo Ullman, far left, and his brother Hank, who was born after the war ended, join Michael Hayse to peer into the remembrance room during construction. In 2017, Leo Ullman re-visited Amsterdam for the first time since he moved to the United States to attend a ceremony in which Yad Vashem presented the Righteous Among the Nations Award to descendants of the two families who saved the Ullmans. On the trip, he was joined by his family and Gail Rosenthal, who encouraged and helped him on the years-long journey to obtain the awards. While in Amsterdam, he knocked on the doors to both the house he lived in as a hidden child and the house he lived in following the liberation. Both residents were home and answered the doors allowing Leo Ullman to step back into his childhood homes. A film crew was present, and footage from that day is in a new documentary film, "There Were Good People," produced by Toby Rosenthal, instructor of Communication Studies, with co-producer Irvin Moreno-Rodriguez, a program assistant in the Holocaust Resource Center. 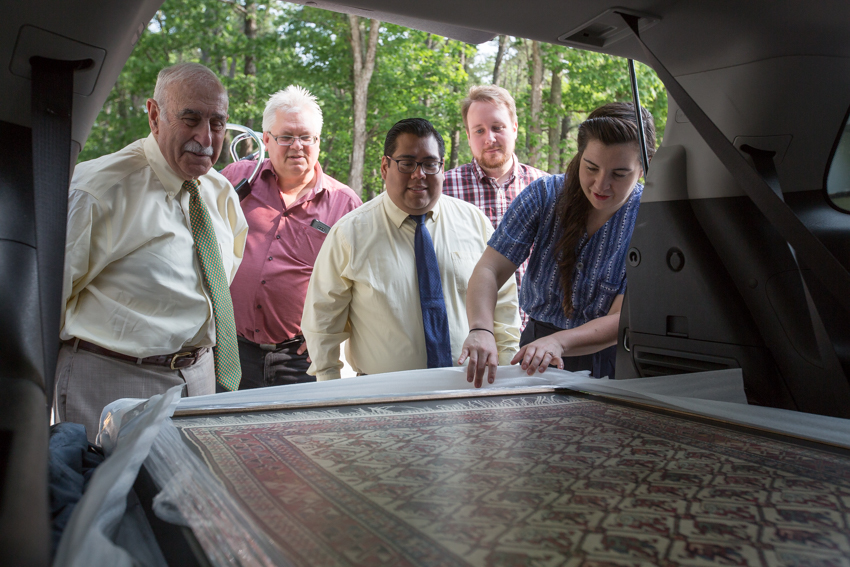 Leo and his brother Hank hand-delivered memorabilia items to Stockton University over the summer. Michael Hayse, Irvin Moreno-Rodriguez, Grant Bolopue and Morgan Everman help to unload the car. Each item tells a story about the families who helped save the Ullmans. The Schimmel family hid Leo, while his parents rented a space in the Peyster family's attic. The Hoogenboom family helped to arrange hiding places for other members of the Ullman family, and Piet Hoogenboom forged false identification cards and transit passes for the Ullmans. 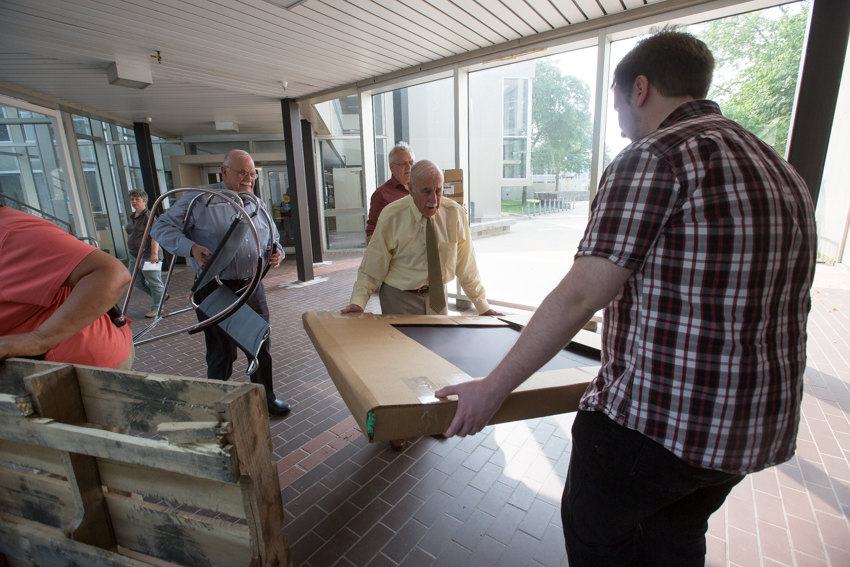 Leo and Hank wanted to carry the memorabilia items, including a rug and chair from the apartment their parent's hid in, to their final home in the remembrance room where they will be seen by generations of students and educators. 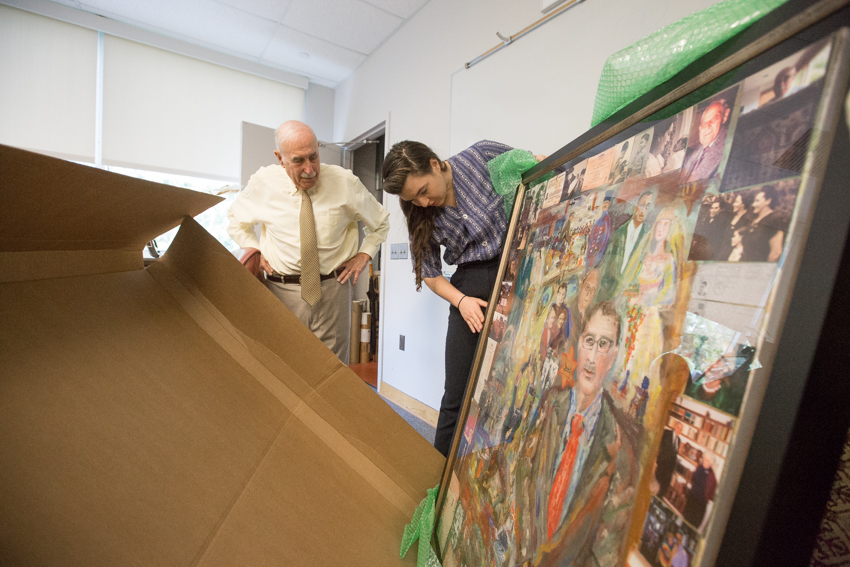 Morgan Everman, a program assistant in the Holocaust Resource Center, unpacks an acrylic collage titled "796 Days." The piece was created by an artist named Shasta Waheed after hearing Leo's story. 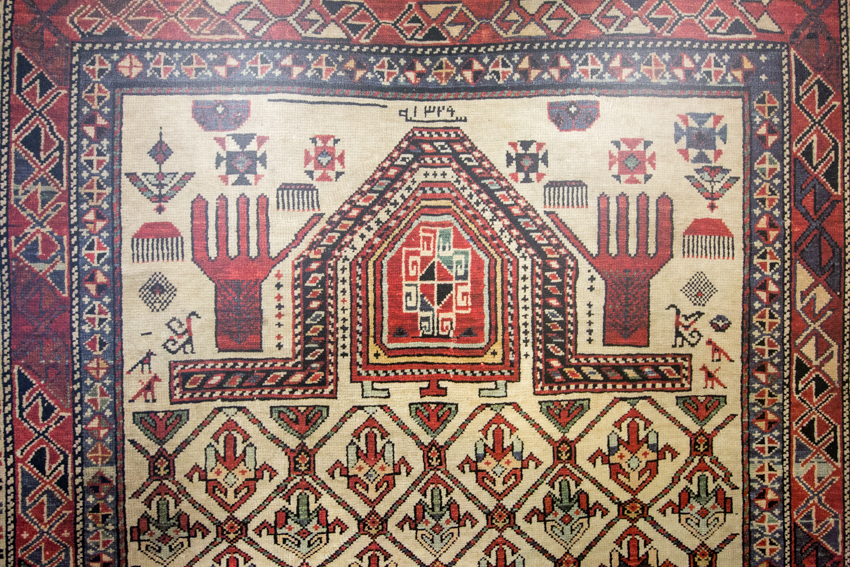 Before the Ullmans went into hiding, they had to raise funds to finance their time away from home. A Persian rug dealer, Mr. Kinnebanyan, gave Leo's father, a former rug dealer for a department store, rugs to sell on consignment. The rug pictured is a photographic replica of a Muslim prayer rug gifted to the Ullman family by Mr. Kinnebanyan for good luck. The original rug went into hiding with the family, to the United States after they were liberated and has been draped over a piano for the past 65 years in Leo Ullman's home. 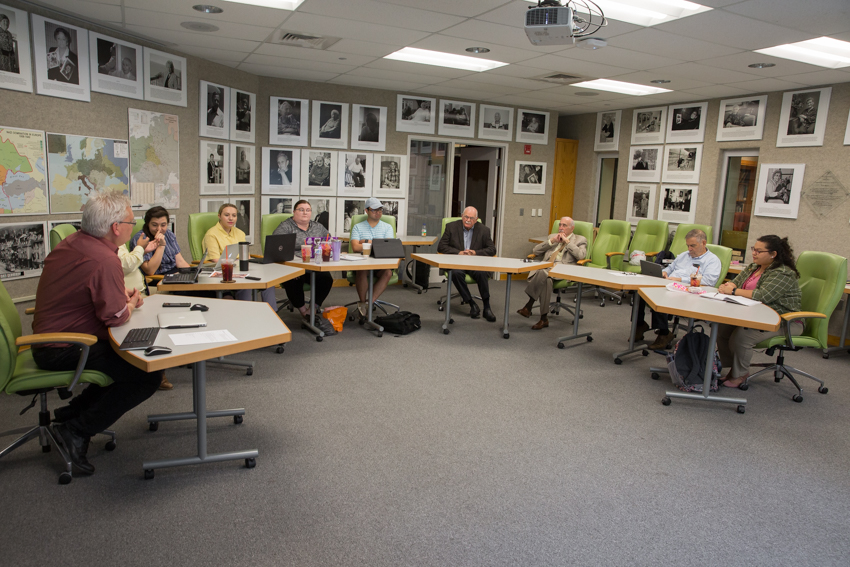 Over the summer, interns who worked to research and curate the exhibition met with Leo and Hank Ullman and Michael Berenbaum. The Ullmans brought a cardboard box containing newspaper articles, documents and photos that the students were eager to dissect to extract key details for the exhibition. 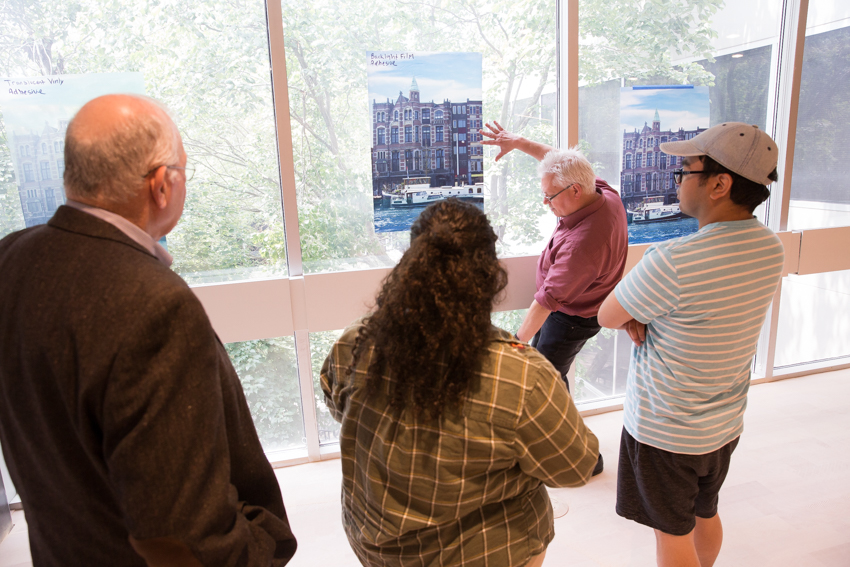 A photograph showing a modern-day street view of Amsterdam captured by Irvin Moreno-Rodriguez was enlarged and applied to the windows. Michael Hayse wanted to capture an iconic street scene to incorporate into the exhibition to help visitors see what the region looks like today and help them imagine what it would have looked like during the war, Moreno-Rodriguez explained. After walking the streets seeking creative angles, Hayse and Moreno-Rodriguez realized they needed to be on the water to get the shot. They took a canal cruise and explained their mission to the captain, who then detoured from the traditional route to reach the perfect perspective. Wendel White, Distinguished Professor of Art who teaches photography, loaned his camera for the endeavor. 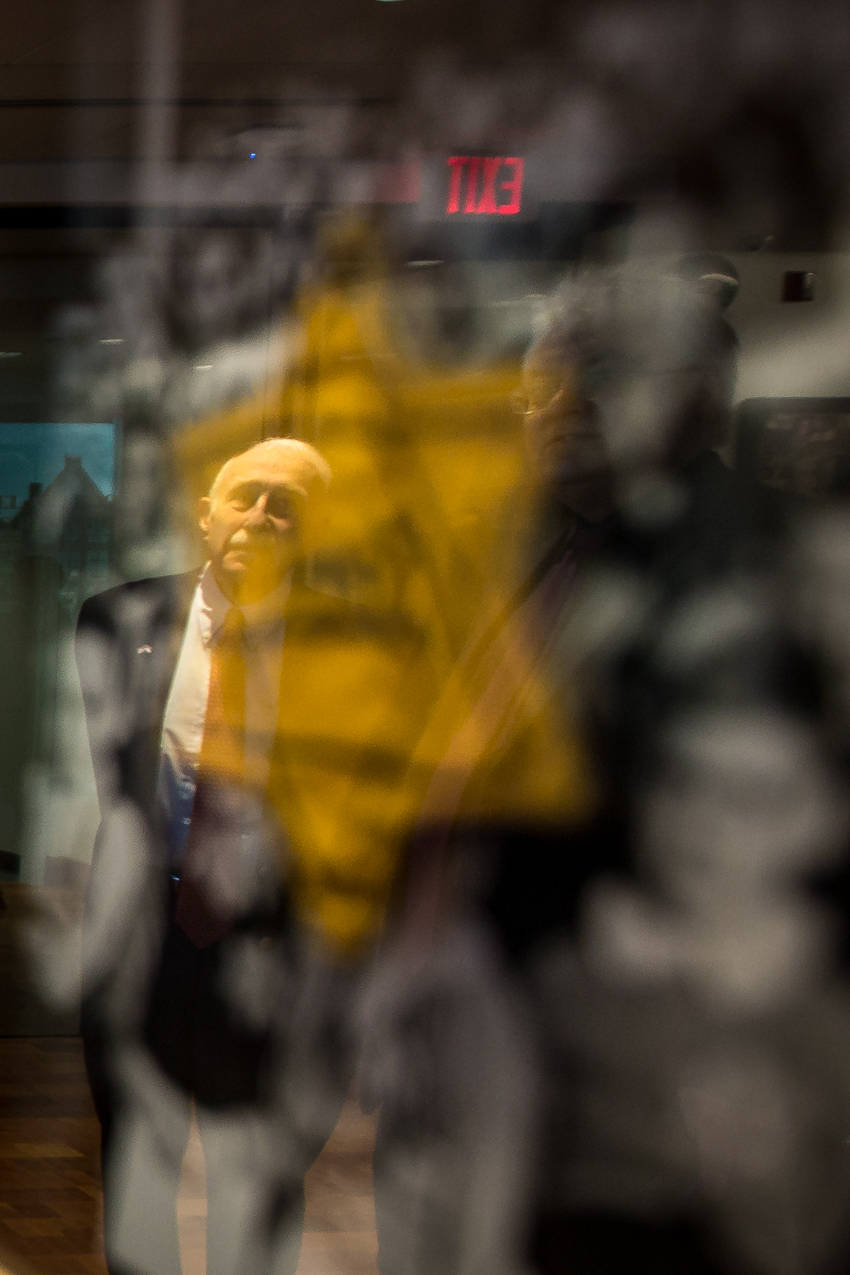 On Oct. 28, Leo Ullman walked into the remembrance room that was once just a dream. He pauses to reflect in front of an original Jewish star. In the German-occupied Netherlands, Jews were required to wear these stars to publicly identify them as Jews. 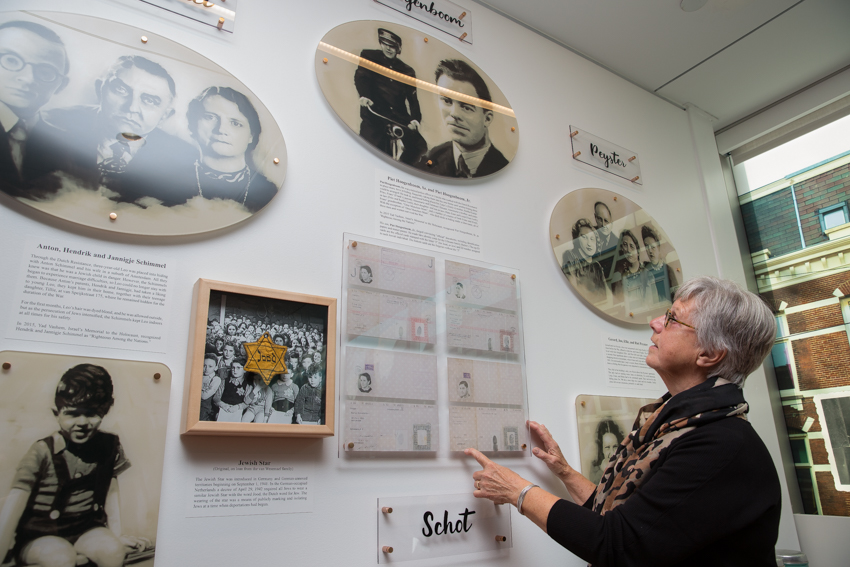 Marion van Wesemael-Hoogenboom looks at a photograph of her grandfather and his handwriting on the forged identification documents he made for the Ullmans. Both the real and forged documents are on display, differentiated by the letter "J" for Jew on the non-forged cards. Descendants of the Hoogenboom rescuers traveled from the Netherlands to attend the opening of the remembrance room. "We had lost contact with the Hoogenbooms, and through a cousin in Holland, I was able ultimately to find the family of Piet Hoogenboom, Sr., but I was not allowed under Dutch rules to contact Marion (his granddaughter) directly," said Ullman. The Dutch civil service was the intermediary and they eventually met. "In that meeting, I showed her my parent's false ID cards and Marion immediately screamed that's my father's handwriting with a fake name," Ullman recalled. 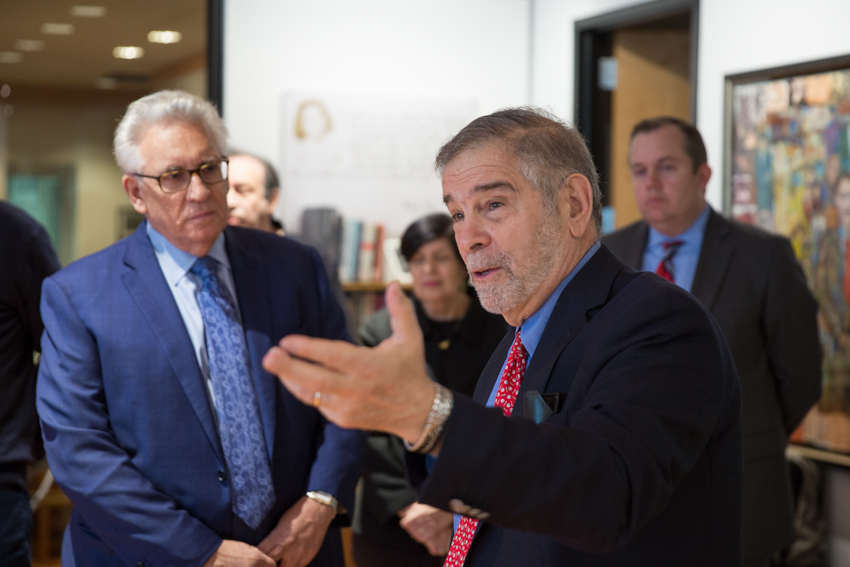 Michael Berenbaum shares remarks during the remembrance room opening. He was also the keynote speaker at the film screening of "There Were Good People." He reminded the audience that decency, dignity and goodness come in small loving gestures. “Responsibility and nobility are within your capacity. It’s not hard, but it’s demanding,” he said. After the screening, the original room of the Holocaust Resource Center was named the Gail Hirsch Rosenthal Room for her work in "informing [students] educationally and moving them emotionally, but challenging them morally and supporting them in an extraordinary way," said Berenbaum. "I travel around the world and there is no other institution that has embodied the study and remembrance and engagement with the Holocaust as an integral part of an undergraduate and graduate education as Stockton University. Defeat is an orphan and victory has many fathers, but this university's victory has only one mother, and that is Gail Rosenthal," he said. 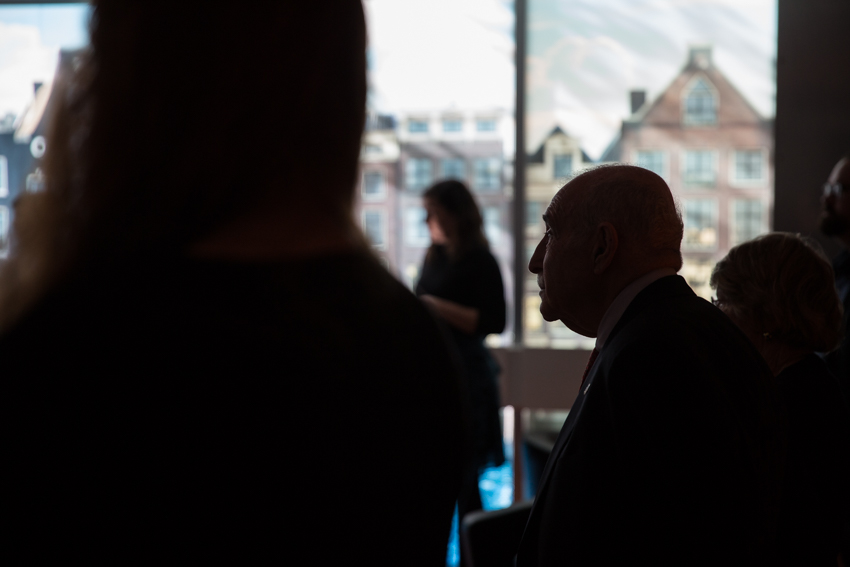 In describing Michael Hayse's work, Leo Ullman, said, "His efforts in involving so many students in creating not only the room but also recording the history of the times in the Netherlands are truly extraordinary deeds by an extraordinary man." 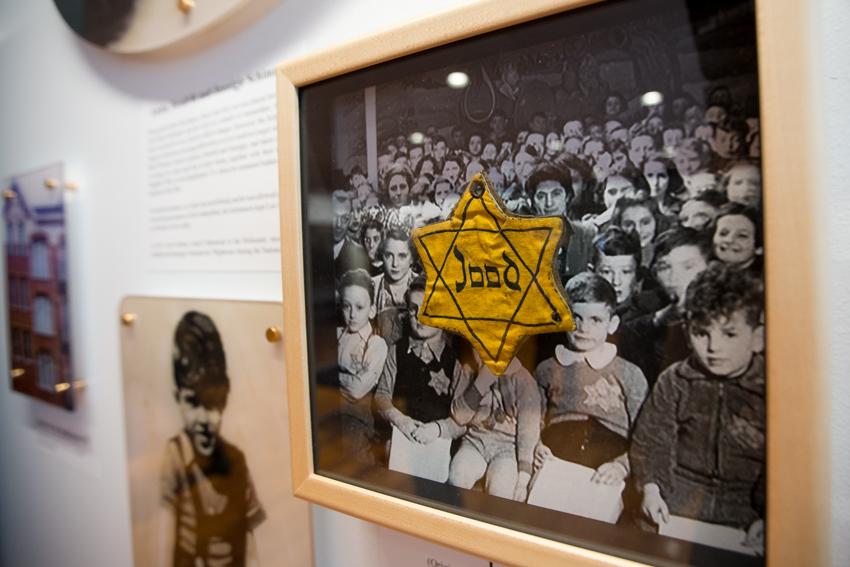 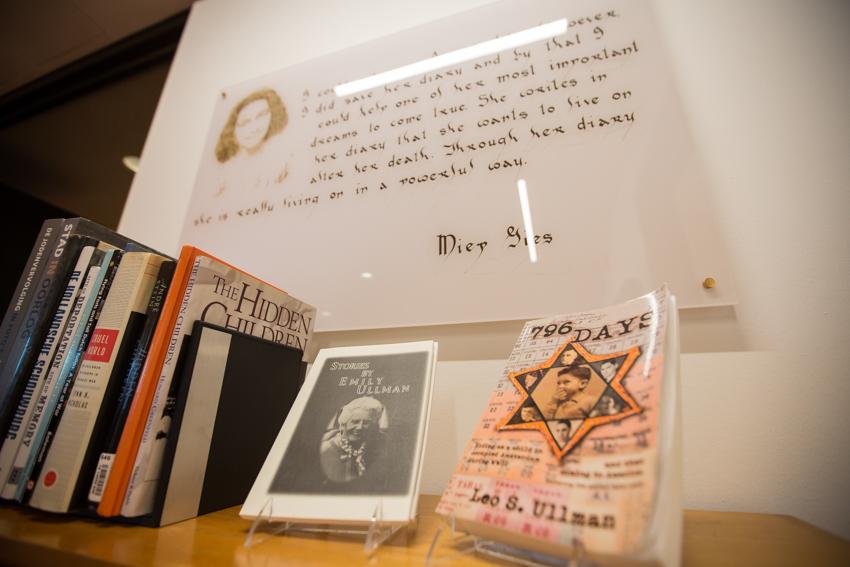 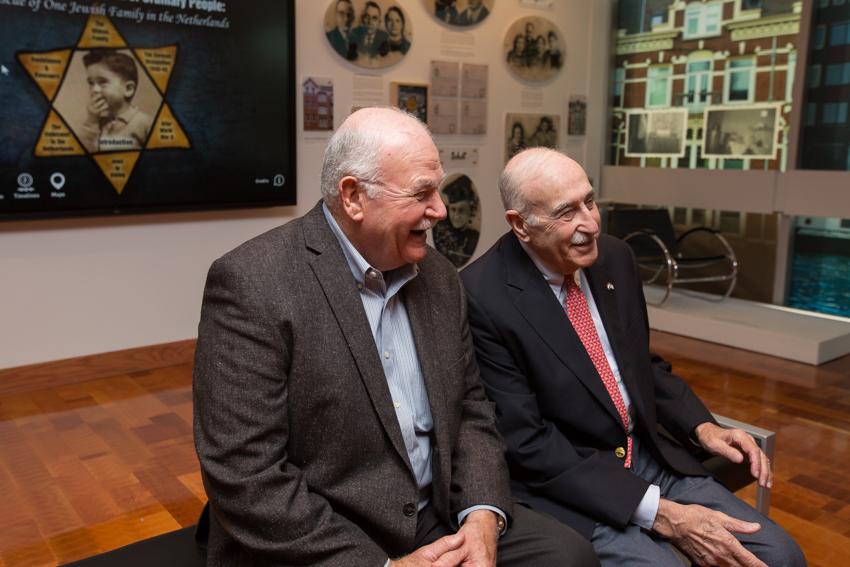 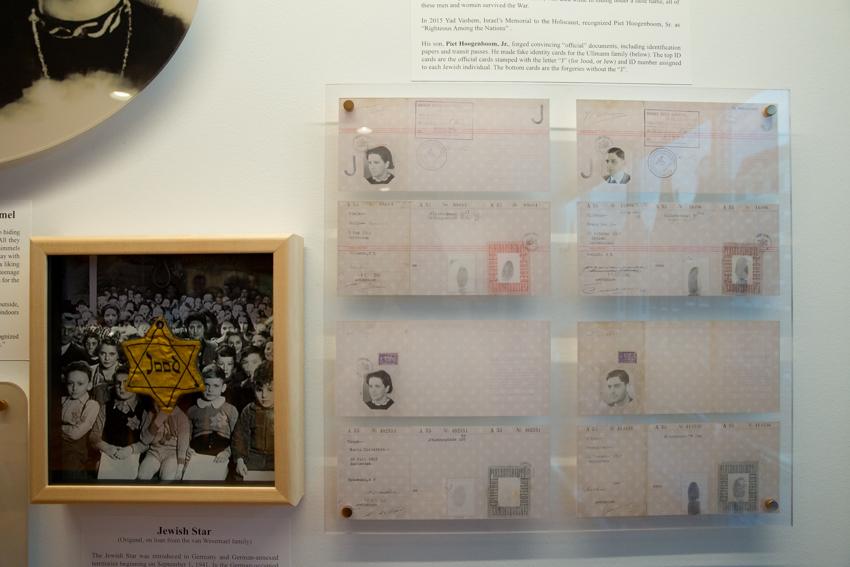 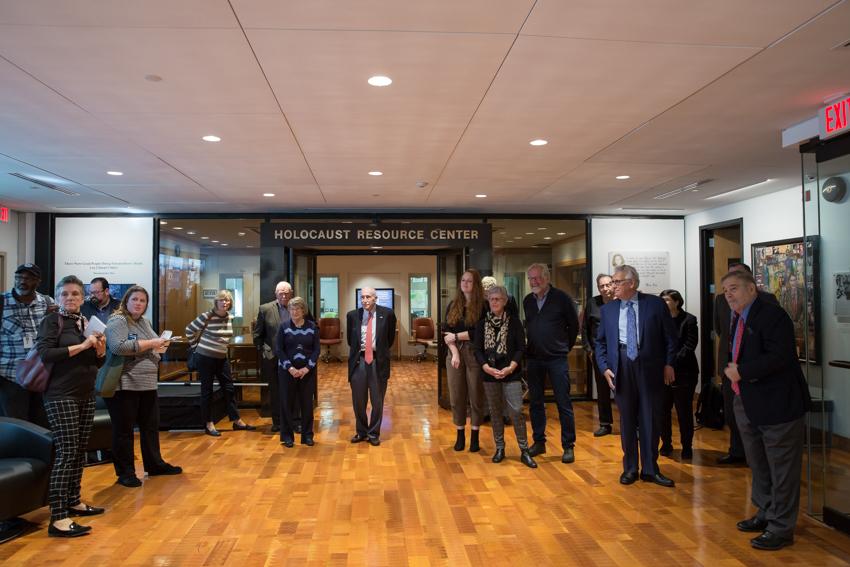 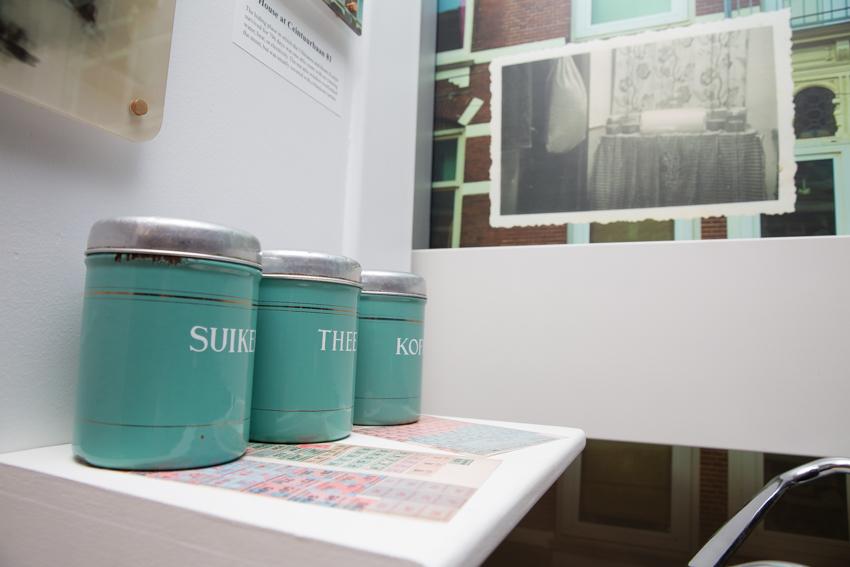 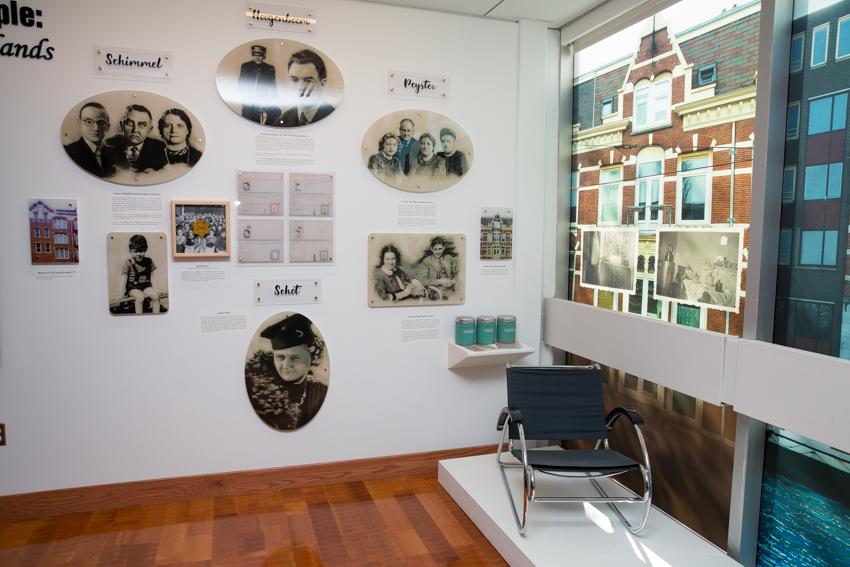 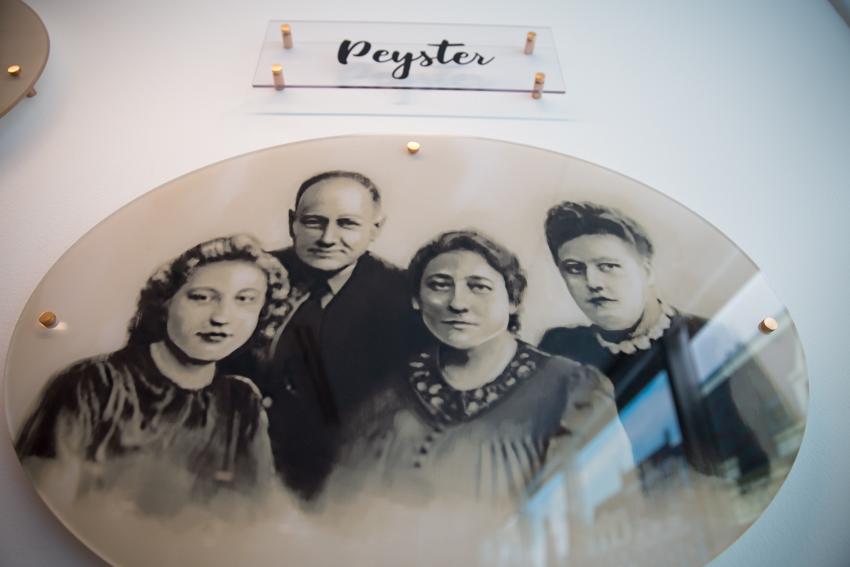 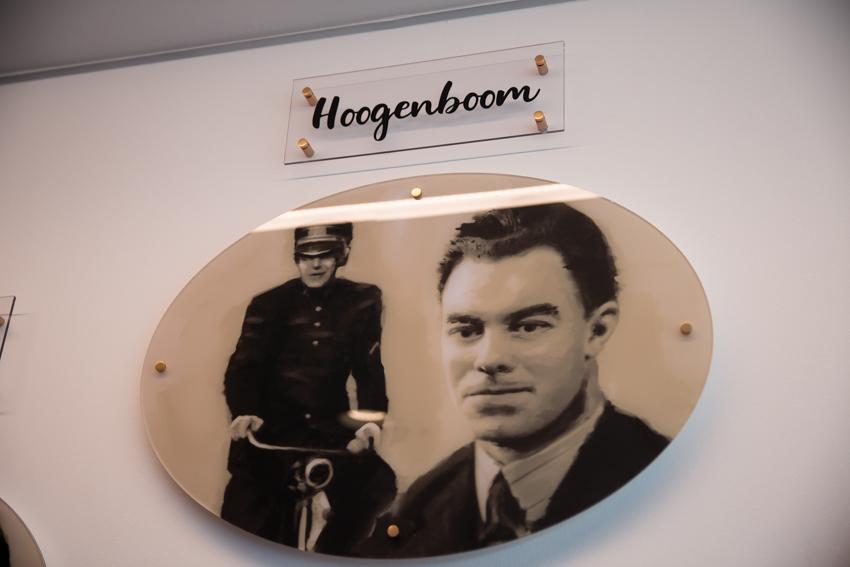 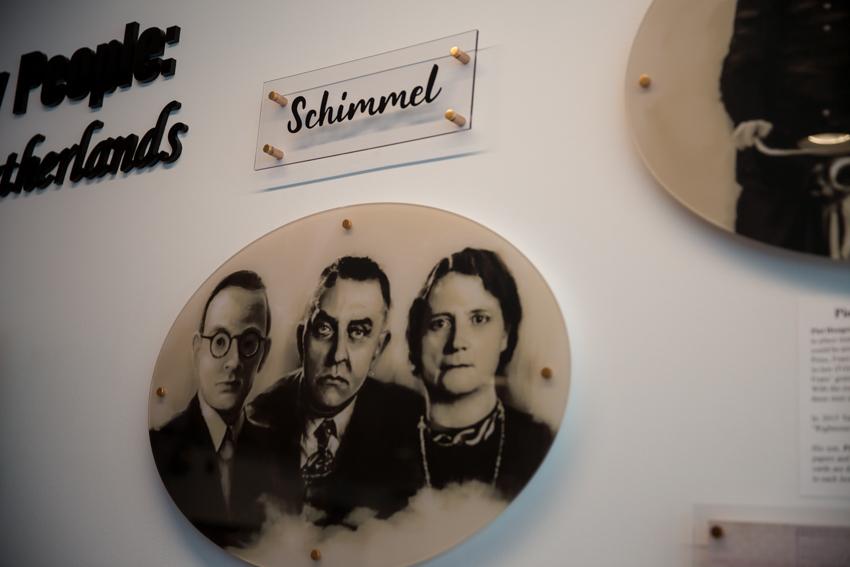 The Graphics Department at Stockton University digitally painted the small family photos so they could be enlarged without loss of detail, developed a custom script font, made maps marking precise locations of key places, designed signage and laid out a PowerPoint presentation with hundreds of slides detailing the research and stories.

View more images on Flickr and read coverage of the dedication.