Galloway, N.J. – When Stockton junior James Culbertson of Absecon went to New York City as part of the Stockton Model UN team representing China, he drew on his experiences during another Model UN trip to China last year.

“By going there, I could really see how they are trying to present themselves to the West,” Culbertson said. “I could better represent that country because I knew what to say and how to behave as a representative of China.”

The Stockton delegation took home an award for “Best Delegation, Honorable Mention,” reserved for the top 20 percent of participating schools. The criteria for this award includes remaining in character, actively participating in committees, and properly using the rules of procedure.

“Stockton students accurately represented the views of China as they addressed contentious global issues with students from over 125 countries," said Associate Professor of Political Science and Model UN Advisor Tina Zappile. "Stockton’s team itself has students from more than five global regions who speak multiple languages, carry different political views, and major in different fields of study. They embraced their own diversity to tackle complex problems, while developing skills in negotiation, public speaking, intercultural competency, and crisis management. Their work in collaborating with others to develop and write global public policy was impressive.”

Several students earned recognition in individual committees with “Best Position Paper” awards, which are typically given to the top one to five percent of students in each committee. The students below received them for their research and papers on China’s position regarding predetermined topics.  The honorees were: 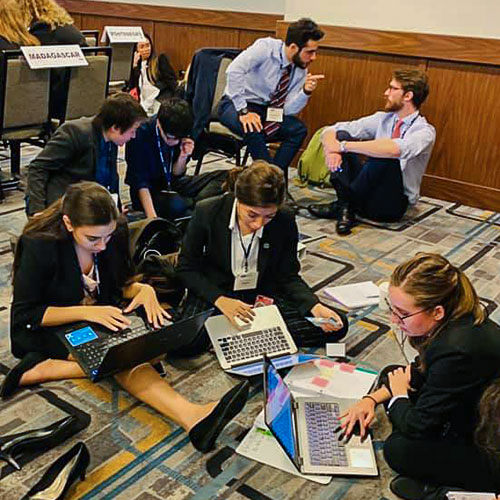 “We started working in October and began training in January to learn how to run a committee,” said Tierno. “This is the most well-rounded experience you can have.”

Uhrick, who also went to China, said all of the skills she developed on Model UN helped prepared her to work as a volunteer.

She and other said the lessons they learn in how to negotiate, communicate and be a good diplomat will serve in in any career.

Culbertson is currently studying Mandarin Chinese and is applying for a Fulbright teaching assistantship in Taiwan.

“You learn to see so many different perspectives in Model UN,” he said. “You really get a richness and also see the United States differently through how others see it.”

View photos from the event on the Stockton Model UN Facebook page.

More information is on the Stockton Model UN webpage.