“It is a strong country,” said Jessica Cathcart of Glassboro, vice president of Stockton’s Model UN who served on the Security Council at the event. “We had a big role, but we trained well.” 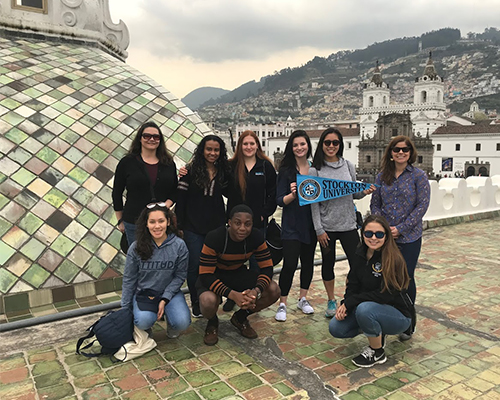 Cathcart said their success came from staying in character as the countries they represented.

“China’s presence is growing and we were trying to be China as they are,” she said. “As a member of the Security Council I had veto power, so if I voted “no” on a resolution, it would fail. It was hard to watch other countries do so much work on something knowing that I would have to say ‘no’.”

The students also visited a tortoise reserve and participated in a Service Learning project at a cooperative organic farm on San Cristobal Island. This farm is in a public-private partnership with the Galapagos National Park to conserve giant tortoises.

The goal of the National Model United Nations is to advance understanding of the UN and contemporary international issues. More than 1,000 university students from around the world participated on the nine simulated UN committees.

Associate Professor of Political Science Tina Zappile formed the Model UN program at Stockton and serves as the club advisor. She also teaches a class on the UN Experience.

The team attends conferences in both the fall and spring semesters. About 25-30 students participate each year in the spring conference in New York City. Each winter, approximately 6-10 students on the International Travel Team attends a conference abroad.

The 2018 conference is in China, and applications are being accepted through Feb. 28. Students must demonstrate a willingness to learn how to use diplomatic means to solve world problems and to listen to different perspectives.

Students interested in participating in this conference have the option to attend as a Model UN student club member or as a student registered in the UN Experience-NY class.

More information on Stockton’s Model UN program as well as application information for the upcoming conference is available at https://stockton.edu/model-un/

Below are the assignments and position paper titles for each team member who attended the Galapagos conference.