Galloway, NJ _ Members of the Model United Nations team at Stockton University knew it would not be easy representing the Democratic People’s Republic of Korea, or DPRK, more commonly known as North Korea, at the Nov. 3-5 conference in Washington, D.C.

The team is highlighted in a feature in Washingtonian magazine in March 2018.

“It was a really big challenge,” said James Culbertson of Absecon, who credited the group’s president, Dom Tierno of Collingswood with the idea to request a challenging country. “It really was interesting to see which countries would work with us and how many people listened to us. We didn’t expect to be taken seriously. It was very diplomatic and professional.”

Ali Samran of Galloway said the club submitted five prospective countries to the national program, then were assigned those they represented. 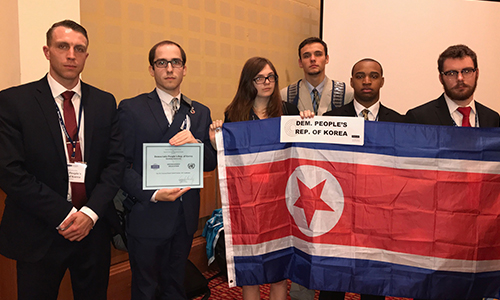 Freshman Axavier Dennis of Pleasantville was on the UN Environment Assembly for the North Korean team. He said it was an issue the country supports, so it was easier to work with other countries.

“But there were agreements North Korea did not sign, so we could not work with those countries,” he said.

Sophomore Syeda Sanjdha of Egg Harbor Township was on the Luxembourg team. Last year she represented India on the United Nations High Commissioner for Refugees.

She said representing Luxembourg was a big change.

“Luxembourg is much more hands off,” she said. “There was a lot of research to do.”

Nadira Anderson of Bergenfield, who was also on the Luxembourg team, said she joined to learn about using diplomacy to understand international affairs.

“It was very taxing at first,” she said. “But it was also extremely fun. The days went really fast.”

The goal of the National Model United Nations is to advance understanding of the UN and contemporary international issues. More than 1,000 university students from around the world participated on the nine simulated UN committees.

Associate Professor of Political Science Tina Zappile formed the Model UN program at Stockton and serves as the club advisor. She also teaches a class on the UN Experience.  The team attends conferences in both the fall and spring semesters, and about 25-30 students participate each year. The spring conference is in New York City. Each winter, the International Travel Team attends a conference abroad.

The teams that travel in the U.S. are supported by the Student Senate under Student Affairs/Student Development and the team that travels abroad is supported by the Presidential Initiative. Students must apply to participate and applications are now being accepted for the spring team headed to New York. Students must demonstrate a willingness to learn how to use diplomatic means to solve world problems and to listen to different perspectives.

In addition to their delegation award, the Luxembourg team also was recognized for four Outstanding Position Papers in the General Assembly, International Atomic Energy Agency, UN Conference on Trade and Development and the UN Environment Assembly.