The topic for this year’s symposium is “The New Civil Rights Movement in the Age of Social Media.”

Journalist and social justice advocate Shaun King will be the featured speaker. Currently a writer-in 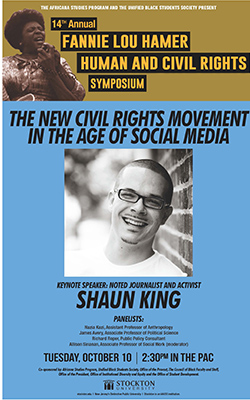 -residence at Harvard Law School’s Fair Justice Project, he formerly wrote on social justice issues for the New York Daily News. He uses Twitter and Facebook to tell stories about the violence across the country.

King is also a fundraiser for victims of injustice and founder of both TwitChange and HopeMob. He is the author of “The Power of 100.”

“Her historic visit to Atlantic City for the 1964 Democratic Convention has been etched in our memories,” said Donnetrice Allison, professor and coordinator of Africana studies program at Stockton. “The symposium continues her legacy by giving a voice to current civil rights issues.”

The symposium is sponsored by the Africana Studies Program and the Unified Black Students Society, or UBSS.

“He embodies what it means to be young and have a voice,” she said. “He is willing to speak up, hear both sides of an argument, and be part of the conversation.”

Tickets are not required. The event is free, but space is limited.

Learn more about Fannie Lou Hamer and the symposium at: https://stockton.edu/general-studies/fannie-lou-hamer.html