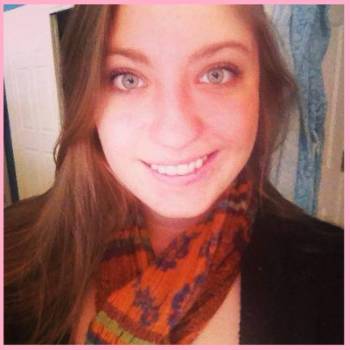 My name is Julia Utts and I'm a super-senior at Stockton. I'm 23 years old, but I look like I'm in high school and I act like a silly kid a lot of the time, especially among kids and close friends. I'm majoring in Language & Culture Studies, with a concentration in World Languages (Spanish, French & Italian, for me!) and also majoring in Teacher Education. My minor is in Writing, so I figured this would be the perfect opportunity to both keep a journal, and get the chance to write during the summer. (And you can see why I'm a super-senior, I still have a little ways to go!) I'm a writing tutor for the Writing Center, and I'm in love with punctuation and grammar. I'm from Northfield, NJ (about a 20-minute commute up the parkway to Stockton) and I live 5 minutes from the Margate beaches. My dream is to first be an Elementary School teacher (bilingual studies or an ESL teacher, hopefully), then get my Masters and my Ph.D, and eventually teach at a college or university in a Spanish-speaking country. I hope this gives me the opportunity to travel the world and soak up all kinds of new languages, and I would love to learn as many languages as possible. I've also taken a little bit of Latin and Russian already. It would be amazing if once I retired, I could become a travel writer, so it starts here!

I am obsessed with food, but I'm only a good cook for the food I eat myself. My favorite food is pasta, but I'll eat just about anything. I love all things colorful (vibrant is one of my favorite words), and I even had a tie-dye business with my boyfriend for a while. I also love taking photos of just about anything that catches my eye, including delicious food and funny things I find throughout everyday life.

I chose Spain because of it's incredibly beautiful cities and scenery and for its rich culture and history. I'm studying abroad in Granada for a month, and then I'll be spending a few days in Madrid on my own, just to explore a little before I return home in early June. I hope you enjoy reading about my travels almost as much as I enjoy experiencing them!

I left home on April 27th and my flight was at 6:40pm. We flew all night and arrived in Madrid around 8:30am, then I realized I had to take a shuttle to an entirely separate terminal of the Barajas Airport. I waited for four hours, then took one more 45-minute flight to Granada, where I was picked up by the student director of CEA Granada. He pointed things out to me during the taxi ride, and then dropped me off at my dorm, which is an adorable little apartment building very close to the center of the city. Just about everything is within walking distance, except for the bus station and airport.

I arrived just in time for lunch, which was made with love by Antonio, the head of the kitchen, and then unpacked my things and took a short nap. I left about a week prior to classes ending, so I unfortunately have a few more assignments to complete before I can really let loose and explore in my spare time.

Today, I had my personal orientation and practical city tour (I'm the only one from CEA to be studying in Granada for just the month of May, so new CEA students won't arrive for the Summer semester until a week or two from now). I walked all over, picked up the necessary supplies like shampoo, tissues and comfy towels, and then got back with enough time to take a nice long nap. My window looks out into a tiny little "courtyard" where laundry hangs and I can see down into the kitchen, but they have great blackout blinds on the outside of the window so I can make it pitch black in my room even on the brightest days. After my lovely nap, I had enough time to navigate my way to the closest gym (with the help of a kind stranger) and worked out in the pool for a couple hours.

One of my goals here during the month is to get back in shape. I've been taking 6 classes this semester and been very stressed out and I've gained quite a bit of weight over the last few months, but I am really looking forward to a change now that I have the opportunity. My meals are pre-portioned by the kitchen and only served at certain hours (unlike the ridiculous amount of food I'd feed myself at home on a daily basis at all hours of the day), I have to walk everywhere, and I'll only have one class four hours a day, so I can work out a specific time to visit the gym every day. Its a beautiful facility with a gorgeous pool and spa, and rates are relatively cheap for just the month. I also know that exercising is a good way to help or possibly even avoid culture shock.

This is a big change for me, obviously, but so far I'm managing well. My Spanish is a bit rusty after a rough spring semester of French II, but I'm picking it back up slowly and remembering things that I've put to the wayside. I was specifically warned not to study in a tourist town like Madrid or Barcelona if I wanted to learn Spanish, because just about everyone there knows English as well, and it's an easy cop-out if I speak to locals. I know realize what they were talking about, because it seems that mostly everyone here doesn't know English. Half the time I can follow along and pick up key words that I know, along with helpful body language, but the other half of the time I am just smiling and nodding. I've already met a lot of people from my building over meals, some Spanish and some American, and everyone is so friendly. So far, I haven't had a single bad run-in with anyone (as far as I can understand, anyway). The staff who run my residence hall all only speak Spanish, but they're sweet and can explain things in simple terms when I seem confused.

The meals (las comidas) are really interesting. Breakfast (el desayuno) is from 8-10am and is very light and not served, you can just come into the kitchen and help yourself. Spaniards don't eat any protein for breakfast, unlike eggs and bacon and sausage like we're used to. Lunch (el almuerzo) is the biggest meal and is very important to Spanish people. Many businesses close between the hours of 2 and 5pm so that people can go home and eat a slow lunch and enjoy their family's company. It consists of some kind of protein and then a vegetable or soup. "postre," or dessert to us, is usually a piece of fruit or a yogurt. Dinner (la cena) is smaller and served very late. The hours here for dinner are from 8-10pm, and it is also customary to have some kind of postre after dinner as well.

So far, my first lunch consisted of mini-tortellinis with white AND red sauce on top, served with a fried egg and mini hot-dogs/sausages, and then for dinner we had rice soup served with very thin pieces of chicken and a cold tomato & potato salad. For breakfast, I was in a hurry to get to my practical tour so I wolfed down some apple juice and a particularly sweet mini-muffin. Lunch was a chicken, chickpea and potato soup, with croquetas (little fried balls of either potatoes with milk and flour, or spinach and cheese), a chunk of lettuce marinated in olive oil, and I feel like I'm forgetting one other thing, but it's gone. For dinner, I just ate some kind of a chowder, possibly made with mushrooms? And then we had thin slices of ham, a squash/zucchini and potato mixture in a creamy sauce, and it's very normal to have toast with grated tomato on it. This toast seemed to have tuna mixed in with the grated tomato, and was served with a half of a hard boiled egg on top. I hope that wasn't too mundane to read...like I said, I ADORE food, and this new change is really interesting to me. Spaniards have a very Mediterranean diet with lots of legumes and olive oil, which I'm more than okay with. I'm really looking forward to my first chance to eat at a restaurant, and I've many great recommendations from locals and students. Paella is very famous here and consists of a rice dish with a mix of either vegetables and meat (chicken, duck, rabbit and even snails), or a mix of different types of seafood. Many Spaniards consider it to be a national dish, while Valencians have claimed it as their own. Another very popular thing that I'm excited to try are tapas, which are free with drinks here in Granada. They are little appetizers, kind of like snacks, and they vary a lot. I'll talk more about that once I've experienced it firsthand.

I'll try to check in as often as I can, and I hope you enjoyed my first entry! If you have any personal recommendations or experiences you want to share with me (bad or good!) in either Granada or just Spain in general, please, feel free to email me at juutt001@gmail.com.

Pic 1 The flight from Madrid to Granada. I can't tell if it's wine country or olive country, but whatever it is, it was beautiful.
Pic 2 Every seat on the plane had screens embedded in the seat in front of you that allowed you to watch movies, tv, listen to music, play games, or you could watch the GPS feature. The GPS was my favorite, as it showed me getting closer and closer to my destination. I snapped a few pics throughout the flight of the map, but this one got me really excited when I saw it. Pic 3 Today (Apr 29th), on my practical city tour, Jorge showed me this beautiful cathedral that's really close to the CEA office. It's 4 euros to get in, but if I show up right before mass, it's free. When I can get inside, I'll take more photos.
Pic 4 I took this photo as we flew over Spain, right before I arrived in Madrid. The sun was rising and it looked gorgeous.
Pic 5 Sunset during my first flight, not long after we left.
Pic 6 Sunrise as we got closer and closer to Madrid. The clouds looked comfy enough to lay on, and the color blending was just incredible.