The Stars are Back Within Reach

The Stars are Back Within Reach 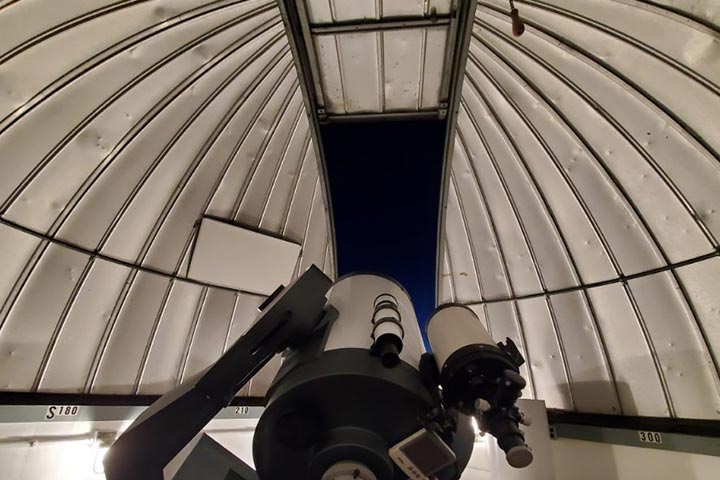 The Harold E. Taylor Observatory reopened in November after extensive refurbishing work completed by Stockton students and faculty. Here, the telescope is pointed toward the night sky through an opening in the observatory dome. | Photo by Kat H. Wentzell '18

“There were soooo many spiders,” said sophomore Courtney Weber, one of a group of physics majors who have spent the last year repairing and restoring the observatory, which has been closed for more than 15 years.

The project began with one student, Mariam Saad, asking Associate Professor of Physics Joseph Trout why the observatory was closed, and what might be done to reopen it. The last time Trout was in the observatory was 1986, as a then-Stockton Stage College senior physics student, to view Halley’s comet, which is visible from earth approximately every 75 years.

The first day that Saad and Trout entered the observatory, they found the telescope in disarray, laying on its side with several pieces missing. They began the project of troubleshooting and reassembling the telescope. Their first hurdles were a lack of documentation and a broken Hall effect transducer used to control the position of the telescope.

Normally, replacing the transducer would be a fairly simple task, that is, if the transducer was still manufactured.  Saad and Trout researched several transducers and were able to find a suitable replacement. They continued to work through several other problems, until Saad graduated in 2018.

The students worked with Trout to replace the Hall effect transducer and the telescope’s circuit board, as well as performing the more mundane tasks of cleaning and painting to prepare for the reopening.

Jacobsen, a dual major in physics and education, is developing a curriculum for using the observatory to teach.

Feltner said having an operating observatory is an attraction for Stockton.

“[W]e can be role models here. This is an opportunity to show people what we have.”
— Briena Feltner '20

The observatory is named after Harold E. Taylor, a former professor of Applied Physics. Constructed in 1974 just off of Pomona Road near the Galloway campus, the observatory is a resource to inform, educate and inspire students and community members with the ever-changing display of the night sky.

An opening reception was held on Nov. 6.

Members of Taylor’s family attended the ceremony and were thrilled with the results. Taylor’s brother Joe, a Physics professor at Princeton University and Nobel Prize winner, said Hal would be “delighted” to see the observatory being used once again.

“Hal loved science and astronomy,” he said. “Growing up, we used to build telescopes together. We used to look at the moon, stars ... Hal would be so happy to see this.”

Trout said their next project is raising funds for a new telescope, which will cost about $11,000, and to replace the structure of the 45-year-old observatory.

Come See for Yourself!

For information about the Harold E. Taylor Observatory, to schedule a viewing, or make a donation, visit stockton.edu/observatory. 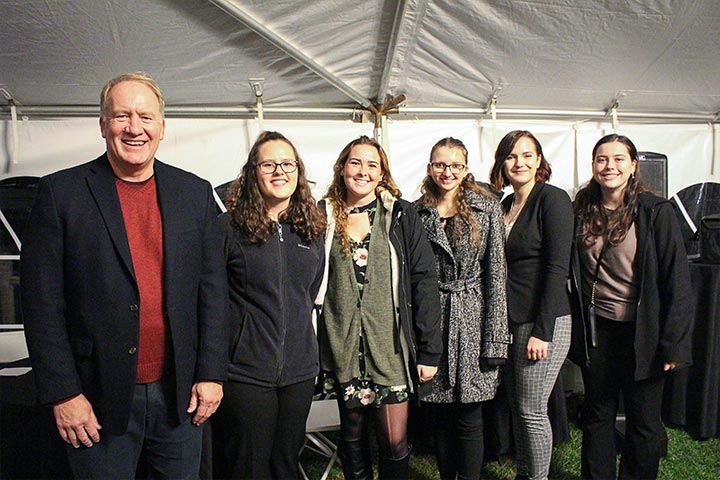 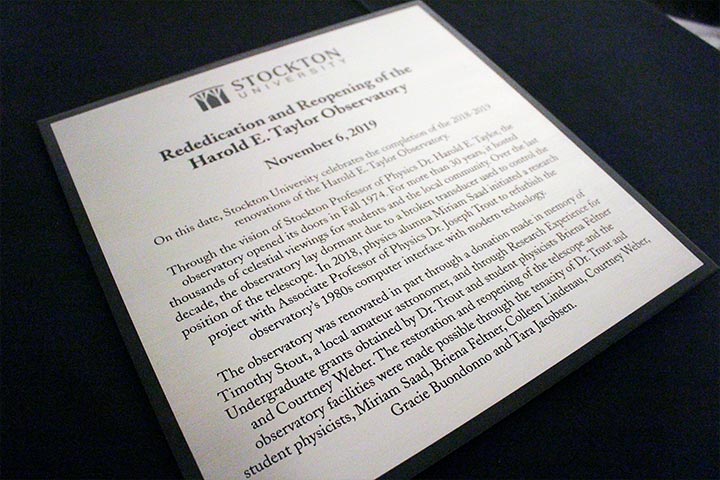 A plaque commemorates the history of the observatory and the work done by faculty and students to bring it back to its star-gazing glory.  | Photo by Kat H. Wentzell

View a photo story of the transformation.

Previous storyA Voice for Wildlife
Next storyWitness to War
©