A Voice for Wildlife

A Voice for Wildlife 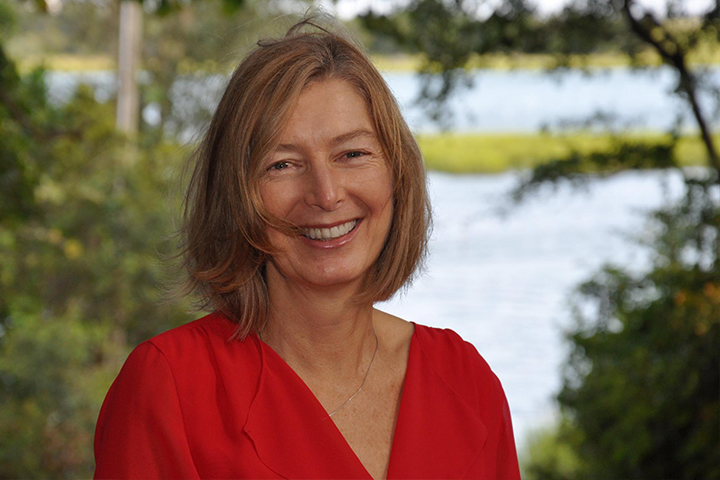 Peggy Sloan's field experiences as an environmental science student deepened her connection to the natural world and wildlife. | Photo provided by Peggy Sloan

When Peggy Sloan '87 declared her major as Environmental Science (EVS) at Stockton, she had no idea what she wanted to do with her degree. She chose the major because it offered the most field courses.

“Those hours in the field helped me appreciate and love New Jersey’s natural places. And, understanding how vulnerable our wildlife and nature was fostered my imperative to do everything I could, however that might manifest, to be a voice for wildlife,” Sloan said.

Sloan’s field experience as a student, in all areas of the EVS program, deepened her connection to the natural world and strengthened her resolve to work toward better understanding and protecting wildlife and wild places. It also introduced her to a community of peers with a shared appreciation of nature.

As an undergraduate student, she worked at Stockton’s marine biology lab in Brigantine for a season and also as a marine technician for the firm doing environmental impact studies for the Oyster Creek nuclear power plant.

After Sloan graduated, she worked with the NJ Endangered and Nongame Species Department on Bald Eagle recovery for two seasons. During that same period, she led outdoor exploration trips for young people, primarily from urban environments, to the mountains, marshes and rivers of New Jersey.

“Given the opportunity to work full-time pursuing wildlife science, or, full-time developing programs for youth in Barnegat Bay, I chose the latter. I love science and value accurate interpretation of our natural world, and, understand that science doesn’t change minds or behavior. Touch the heart to teach the mind – this philosophy shaped every professional decision since that first choice to take the path towards conservation education,” Sloan said.

According to the World Wildlife Fund, 50 percent of Earth’s wildlife has been lost since Sloan's graduation from Stockton in 1987.

“We’re experiencing massive species extinction and people are spending less and less time in nature. We’ve got to do more if we hope to reverse the decline or at least slow the pace of extinction,” Sloan said. She pointed out that accredited aquariums and zoos offer a unique opportunity to reach naïve audiences and allow them to look nature in the eye. After a number of opportunities working as a field biologist in marine and terrestrial fields, she discovered the power of transformative experiences when people connected with animals. 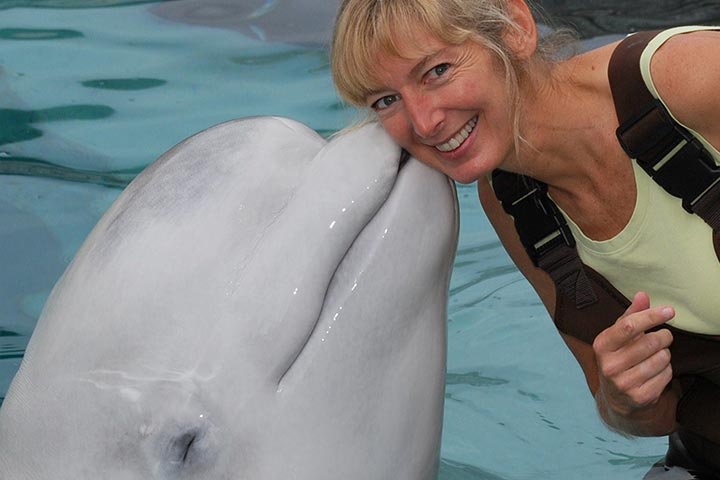 Peggy Sloan '87 works with a variety of wildlife, including the beluga whale pictured here. | Photo provided by Peggy Sloan

“My focus shifted from working as a science professional to communicating science through conservation education. I did, through a number of post-graduate experiences, become more interested in aquatic environments and returned to school to complete an M.S. in Marine Biology in 2006 from the University of North Carolina, Wilmington,” Sloan said.

Fast forward to now and Sloan is continuing to be a champion for wildlife as the Chief Animal Operations Officer at the John G. Shedd Aquarium in Chicago.

“Every day I witness something remarkable between our animals and the people who care for them. Whether it’s a leopard shark swimming on cue to a target for a health check, a penguin snuggling its favorite caregiver, or an aquarist painstakingly modifying homes behind the scenes or in public view for their animals. I am in awe of the expertise and compassion behind creating opportunities for people to look nature in the eye,” Sloan said. 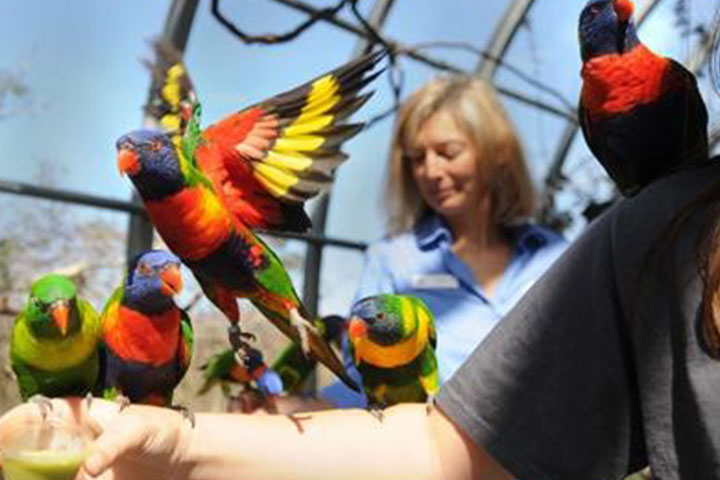 Here, Sloan can be seen behind an armful of lorikeets, medium-sized parrots native to Australia and New Guinea.  | Photo provided by Peggy Sloan

Working with people who create ecosystems – from an oceanarium for whales and dolphins with millions of gallons of saltwater, to small freshwater environments with live plants and endangered fish and invertebrates – is a constant reminder of nature’s complexity.

When asked about what advice Sloan would share with future graduates, her response, while a little unorthodox, was true to her heart and has not steered her wrong.

“My advice is: welcome advice and filter it through the lens of your own experience, knowledge and intuition. Staying curious, looking for the unexpected and remarkable in everyone, and trying to be kind; these are the things worth working on every day. The voices who share all of the things that aren’t possible for you might be wrong,” Sloan said. “Maybe I’m not a great example. My ‘true North’ has always guided me – a compulsion to help people value nature. The most effective means for following a dream and responding to a passion will be different for everyone. I hope there are many, many more students today who are compelled to work with and for wildlife. For those special souls: Thank you, keep it up, speak your truth, and take time to restore yourself in nature.”