The Richard Stockton State College Police Department was organized in 1971 under the direction of James A. Williams.  At this time, the department consisted of eleven (11) police officers; three (3) Sergeants and eight (8) Patrolman.  At the time, the official designation for sworn personnel was the terms “Campus Patrolman,”  “Sergeant, Campus Patrol” and Lieutenant, Campus Patrol.”  It was not until the mid 1980’s when the statute was revised that the word Police was utilized.

This was also the time when the College was transitioning from the Mayflower Hotel in Atlantic City to the current campus in Galloway Township.  At that time the new campus consisted of A through D Wings and the first few housing complexes which are currently housing 1, Arrowwood through Heather Courts.  The library was in D-Wing, the cafeteria and pub were located in lower C-Wing.   Getting to the new campus was only by way of Jim Leeds Road as “College Drive” did not go through, but stopped at the Circle where the current Arts & Sciences Building now sits.  The majority of campus offices were located in the various buildings and houses that were left behind by the residents when the state purchased the land for the college.  The Admissions Office was located at Pomona Road and Duerer Street; the Business Offices were located at Jim Leeds Road and College Drive.  Our first police facility was just across College Drive and Jim Leeds Road, and we shared the building with the Purchasing Department. 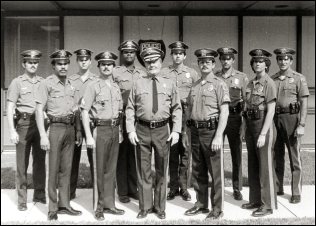 What the police department faced in those early years was acceptance and recognition by not only the college community, but the local community, and more important, the other law enforcement agencies in the county and state.  Clearly police on campus was new to our state.  The majority of New Jersey colleges had security departments and relied on the local police for law enforcement needs.   So Stockton was radical in establishing a police agency from the inception, and not transitioning from a security component.   But as we know now, Stockton was a “non-traditional” college from the beginning.  Yet, Dr. Richard Bjork, the first President of Stockton, supported the formation of a police department over the traditional security element.  He anticipated that the college was destined for rapid growth and felt that the local police did not have the resources needed to serve both their citizens and a college community as well.

As noted, the first commissioned and sworn officers faced many challenges.  The major one was the statute that authorized and empowered Campus Police agencies.  The officers had full police authority and powers when “on duty” only.  Once off duty, they were not considered police officers.  Therefore they were vastly different than their peers.   Other issues were the constant concerns of balancing a police presence with college students, and the main issue here was the uniform.  Chief Williams wanted the uniform to conform to accepted police standards, but many college officials did not.  They wanted a different approach, what they termed as a “softer” approach.  So what emerged was a uniform that consisted of a Stetson uniform hat, which was worn by the Galloway Police; a light blue uniform shirt; navy blue trousers with no stripe on the legs; a gray blazer with the department’s patch on the pocket.  The officer’s badge, name plate, and duty equipment and weapon was concealed by the blazer.  The issued duty weapon was a .38 caliber revolver, like our peers, but was reduced to a 3 inch barrel and capable of only five (5) rounds of ammunition so it too could be concealed by the blazer.  In addition, police vehicles were not “marked” as we see today.

Another major issue was radio communications.  The police department shared a single system with the college’s maintenance and facilities department.  This did not allow for interoperability with any of the local police agencies.  Therefore, with the lack of traditional police authority, the lack of traditional police uniforms, the lack of traditional police vehicles and no secure radio communications system, the average person really didn’t know who the officers were or what they did.  The most common question we all received and dreaded to hear was, “Are you guys real cops?”   However, despite these challenges, the officers let their actions and professionalism on duty answer this question.The original officers that made up this first group came from other police agencies, from the military, or fresh out of school.  They came for various reasons.  Some came to continue their education, others for a new challenge in law enforcement, and some for the salary and benefits.  It must be noted that at the time, the starting salary for a “Campus Patrolman” was more than many local police departments, including Galloway Township.

In 1972, Mr. Phillip Carroll was selected to take command of the department.   Mr. Carroll retired from the Federal Bureau of Investigation (FBI).   He continued to improve the department by initiating new programs within the department in the area of crime reporting, advanced training, up-graded equipment and vehicles.   Our community was slowly coming to realize what we had to offer and provide to the college community.

In 1975, the third person was selected to head the police department.  Mr. William Long had served in the New Jersey State Police, retiring with the rank of Lieutenant.  To date, he remains as the longest serving Chief at Stockton, having served for eleven years.   Under the direction of Chief Long, the department underwent major changes.  Up until this time, the head of the police department held the title of Director.  Chief Long was the first to seek a change in this title to Chief of Police.  He also became the first Chief to become a member of the Atlantic County Association of Chiefs of Police, and during his tenure, became the President of this association.   He later became a member of the State Chiefs of Police Association.  The department moved to a new facility, a shared building with Facilities Maintenance.   Uniforms changed; vehicles were upgraded, training continued to be offered beyond the basic police academy and the number of officers increased.  With these changes, the department’s reputation improved.  During Chief Long’s tenure, the statutes governing campus police were amended.  Prior to those changes campus police were not afforded the same authority and powers as all other police officers in the state.  And it was with these amendments that the titles changed from patrolman to police.

In 1986, Chief Long retired.  The college hired a new Chief who came from a university police department in Virginia.  Chief Michael Meredith stayed only a few weeks, and then abruptly resigned to return to Virginia.

In 1987, the college appointed Mr. James Kennedy as the Chief of Campus Police.   Chief Kennedy served in the Philadelphia Police Department, retiring as a Lieutenant.  He then served as the Director of Public Safety at Widener University.   Chief Kennedy was the first to bring both local and campus law enforcement experience to Stockton.  He held a Master’s Degree and was the first Chief to teach in the Criminal Justice Program at the college.  Chief Kennedy continued to make improvements and employ new programs to the department in many areas.   During his tenure, the department moved to a new facility, which was shared with the Office of Housing and Residential Life.   Chief Kennedy retired in 1996.

In 1996, the college appointed the sixth individual to serve as Chief of Police.  Mr. Thomas Kinzer had served a long and distinguished career in the New Jersey State Police, retiring with the rank of Major.   Chief Kinzer continued to move the department forward and made advanced training a priority.   While this is an asset, it was also a liability.  Officers were being lured away by this time by other police agencies within the county and state.  Where once we were not considered   “real” police, other departments saw the training and professionalism our officers displayed.    The department now faced a new challenge--retention of officers.  Thanks to the leadership and foresight of Chiefs Long, Kennedy and Kinzer, we were now considered a professional law enforcement agency.   Chief Kinzer retired in 2003.

In 2004, the college selected Mr. Glenn M. Miller as the new Chief of Police for the college.  Like Chiefs Long and Kinzer, Chief Miller served a distinguished career in the New Jersey State Police, retiring with the rank of Major.   Chief Miller holds a Master’s Degree and like Chief Kennedy, taught in the college’s Criminal Justice Program.  Chief Miller initiated many new and innovative programs within the police department.  Through his leadership, Stockton Police achieved status as an Accredited Law Enforcement Agency through the New Jersey State Association of Chiefs of Police, the first Campus Police Department in the state to receive this distinction.  Other noted programs created or expanded were Neighborhood Watch, Safe Campus Escort Service, Community Oriented Patrols for Students (COPS), and Stockton EMS.  In terms of community involvement, the college is involved in the state’s Community Emergency Response Team or CERT program.  To date we have over 100 students, faculty and staff trained to respond to any emergency on or off campus.  We are the first college CERT Team to receive an emergency response trailer and related equipment in the state.   In other areas, we have in place a centralized campus 9-1-1 center and a state approved Emergency Operations Plan.   In 2011, we added our first K-9 to the department which was funded through a Federal Grant.  Our K-9, Hemi, is an explosives detection dog and is currently being trained to serve as a tracking dog as well. Chief Miller retired on June 28th 2013. At that point Lieutenant Cynthia Parker assumed command of the Police department as Interim Chief of Police.

On May 10th 2014 Gregory J. Coffin was appointed as the chief of department. Chief Coffin left on December 31st 2014 due to personal reasons. Lieutenant Cynthia Parker again assumed command of the department, and continues to serve in the Interim Chief role.

On February 18th 2015 The Richard Stockton College of New Jersey officially became Stockton University. The department’s values of Integrity, Dedication, Excellence, Achievement and Loyalty continue to be welcomed by the university community.  We live by our motto, “Protecting, Serving and Educating America’s Future.”

On May 29, 2018 Adrian J. Wiggins was named as the Director of Campus Public Safety.  Prior to Stockton Director Wiggins served as the executive director of Campus Safety and Public Safety at Morgan State University in Baltimore, Md. Prior to that role, he served as Morgan State’s chief of police for seven years. Before working at Morgan State, Adrian served 11 years with the City University of New York (CUNY) Public Safety Department, advancing through the ranks to deputy director of Public Safety at the Borough of Manhattan Community College in New York City. He earned a Post Baccalaureate Certificate in Security Assessment and Management and a Master of Science in Integrated Homeland Security Management from Towson University.  He is also a graduate of the National Emergency Management Advanced Academy in Emmitsburg, M.D.