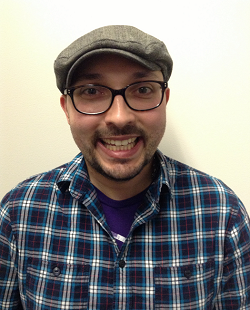 Galloway, N.J. – Daniel Fidalgo Tomé, of Manahawkin, N.J., has been named chair-elect of the 2016-2017 national steering committee of the American Democracy Project (ADP), which focuses on higher education’s role in preparing civically engaged citizens with 250 participating colleges and universities from 48 states and Puerto Rico.

“Being selected to be a part of the leadership team for the national American Democracy Project steering committee is a great privilege; and it is an honor that colleagues from around the country have recognized me in this way,” Tomé said.

The ADP is a multi-campus initiative of the American Association of State Colleges and Universities (AASCU). “We’re delighted for Daniel to serve in this capacity,” said Jen Domagal-Goldman, ADP national manager. “His ideas, energy and commitment to fostering civic learning and democratic engagement throughout public higher education are to be commended and will be invaluable in our strategic planning and execution of future ADP programming.”

Tomé, who serves as Stockton University’s director of Service-Learning, has been involved with ADP for five years, serving on the organization’s steering committee for the past two. He will officially become chair in 2017-2018 at the end of the Civic Learning and Democratic Engagement (CLDE) Leadership National Meeting in Baltimore, Md., and will serve as past chair for 2018-2019.

The steering committee works on the strategic plan for the organization, an initiative of the American Association of State Colleges and Universities (AASCU), planning the annual awards, the CLDE national meeting and the ADP national organizing meeting.

“The mission of Stockton University and the goals of the American Democracy Project are closely aligned in that both are committed to the education and preparation of civically engaged citizens,” he said. “Critical thinking, social responsibility and problem solving are at the forefront of a Stockton education, and the ADP initiatives provide tools to community partners, faculty, staff and students to empower us to be creative and innovative educators. We want our students and alumni to address the needs of our communities.”

Stockton University’s Office of Service-Learning, overseen by Tomé, provides students, faculty, staff and community partners with opportunities to engage in “service with a purpose” through classroom and co-curricular activities.

These members of the Stockton community work closely with the Political Engagement Project, Economic Inequality, Stewardships of Place, E-Citizenship, and Global Challenges, all initiatives under the umbrella of ADP, to bring guest speakers, lectures, panels, film screenings and democracy cafés to the university. The Political Engagement Project has screened political debates, and brought keynote speakers such as Bryan Stevenson, founder and executive director of the Equal Justice Initiative and professor of Law at New York University School of Law, to campus for Constitution Day, an ADP event.

“Active public work is only a portion of our broader notion of engagement. Stockton’s Service-Learning and American Democracy Project initiatives allow students to participate in deep learning and critical reflection in order to grow holistically in the Stockton and regional community,” Tomé said.

Tomé earned his Bachelor of Science in Environmental Policy, Institutions and Behavior from Cook College, Rutgers University and his Master of Education from the University of Massachusetts Amherst. He works closely with community partners in the South Jersey region to create authentic, reciprocal relationships. He is currently working toward an Ed.D. in Organizational Leadership at Stockton University.

Prior to his work at Stockton, he worked at the City College of New York in Harlem overseeing diversity, community service and leadership development student programs; as part of the City University of New York system; and for the Board of Public Higher Education for the Commonwealth of Massachusetts coordinating the Undergraduate Research Conference for the state.

Since its inception in 2003, the American Democracy Project has hosted national conferences, regional meetings, a national assessment project, and hundreds of campus initiatives including voter education and registration, speaker series, and days of action including the MLK Day of Service and Constitution Day.