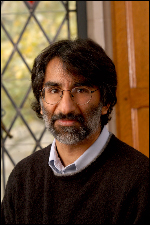 Galloway, N.J. – Constitution Day at Stockton University on Wednesday, Sept. 21, will feature a keynote speech by Akhil Reed Amar, Sterling Professor of Law and Political Science at Yale University. Amar has been cited by U.S. Supreme Court justices in more than 30 cases, and regularly testifies before Congress at the invitation of both Republicans and Democrats.

Amar’s presentation, “The Supreme Court and the Constitution: What’s at Stake in the 2016 Election?” will focus on the impact of the death of Justice Antonin Scalia, the stalled nomination of Judge Merrick Garland to the Supreme Court, current constitutional controversies and the potential effects on the Supreme Court.

The event will be held in the Campus Center Event Room, located on the main Galloway campus. The event is free and tickets are not required, but seating is limited. Doors open at 6 p.m. and the event begins promptly at 6:30 p.m. The speech will also be simulcast in the adjacent Campus Center Theatre to provide additional seating.

Amar, who teaches constitutional law at both Yale College and Yale Law School, is a member of the American Academy of Arts and Sciences and, in 2008, received the DeVane Medal – Yale’s highest award for teaching excellence.

He has authored more than a dozen articles as well as several books, including, “The Constitution and Criminal Procedure: First Principles,” “The Bill of Rights: Creation and Reconstruction,” “America’s Constitution: A Biography,” and “America’s Unwritten Constitution: The Precedents and Principles We Live By.”

His most recent book, “The Constitution Today: Timeless Lessons for the Issues of Our Era,” was published this month.

Amar has written widely for publications such as The New York Times, The Washington Post, the Los Angeles Times, The Atlantic, and Slate.

His work has received awards from the American Bar Association and the Federalist Society.

He also served as an informal consultant to the popular television series, The West Wing, and his work has been showcased on shows including The Colbert Report, Charlie Rose, and the MPH Show.

Constitution Day is one of a series of events at Stockton that will include voter registration efforts, a panel discussion with Stockton students who attended the Republican and Democratic National Conventions, debate-watching parties, and other lectures on history, politics and elections.

The activities are sponsored by Stockton’s Political Engagement Project/American Democracy Project, Office of Service-Learning, Office of the Provost, Office of Development & Alumni Affairs and the Stockton University Foundation.