Stockton senior Izabelle DelRoss, a co-caption on the school's women's rowing team, coaches up campers while on Lake Fred.

Galloway, N.J. — Jordan Edwards loves being outdoors playing sports, but the 14-year-old from Mays Landing hasn’t been able to participate in many organized activities recently due to the COVID-19 pandemic.

Then her father discovered the Summer Youth Rowing Program at Stockton University. The monthlong camp meets weekdays in July at Lake Fred on Stockton’s Galloway campus. The program, in its second year, provides more than 30 Atlantic County children entering seventh, eighth and ninth grades a free introduction to the sport of rowing.

Stockton men’s rowing coach Joe Maguire is the coordinator for this summer’s program. He’s been joined by Steve Kelly, the rowing coach at Ocean City High School, Joe Welsh, Holy Spirit High School's girls crew coach, and Vashon Brock, the assistant boys crew coach at Oakcrest High School and a 2021 Stockton graduate. Several Stockton students also are part of the camp — teaching the new rowers the basics of the sport but also providing them with some positive life skills learned from being out on the water.

While the campers spend most of their mornings taking turns with sculling boats (an oar on each side) and sweep rowing (only one oar), they also hear from guest speakers before getting on the water.

Recently, representatives from AtlantiCare instructed campers about good nutrition habits and healthier snack options. Maguire said he’s also had Stockton professors, U.S. National Team rowers and members of the Atlantic County Prosecutor’s Office come to talk about setting positive goals for yourself and how to reach those goals.

“These kids come from all different backgrounds and schools,” said Maguire, who said last year’s program only included Atlantic City kids, while this year’s expanded to include campers from Galloway Township, Egg Harbor Township and Mays Landing. “It’s been great to watch them meet people they wouldn’t have normally met and make friends and learn not just how to be good rowers but learn how to be good people and members of the community.”

The camp has also been a great experience for Stockton students to work with children and pass along some of their rowing knowledge.

“I tell them all the time that it’s wonderful to be working with them because being a coach effectively makes me a better athlete,” said Izabelle DelRoss, a senior History major from Mullica Township, who’s also co-captain of Stockton’s women’s rowing team. “It’s been wonderful to get to share my knowledge and my experience and to get a chance to teach what I know.”

Maguire said some of the students from last year’s camp went on to row in high school, and he hopes that will continue with this group of kids too.

Aleah White, 13, said she’s hooked. This is her first year involved with rowing, and the eighth grader would like to continue when she goes to high school.

“My favorite part is rowing and just being with all my crewmates,” said the Egg Harbor Township resident. “It was a little hard for me to get the concept, but after a while I got it and now it’s pretty easy. Plus, you can get a scholarship for it.”

Because the camp is being held on campus this year, it gives the students a chance to see Stockton in person.

“For some of these kids to get out of Atlantic City and to get to the Galloway campus and to see a college educational setting, that’s all part of the experience as well,” Maguire said.

And for Edwards, it could lead to attending Stockton in the future.

“Who knows? All I know is the people I’ve met here so far are really excited to show me how great Stockton can be,” she said.

The Summer Youth Rowing Program was founded by a group of rowing enthusiasts who wanted to expand opportunities to underrepresented youth who might not otherwise have the access to learn how to row or attend a rowing camp.

The program is free to all campers, thanks to donations and sponsorships, and continues until July 28, when parents will be invited to watch the kids row on the lake.

The program welcomes additional supporters and donations can be made at stockton.edu/youthrowing or by contacting Associate Director of Development Alicia McMackin at 609-652-4861. 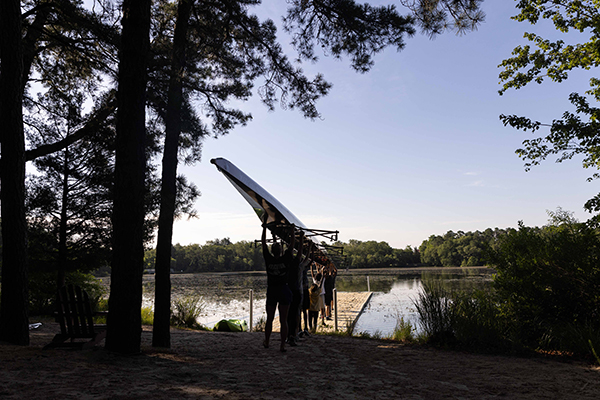