Galloway, N.J. – The 2022 Unity Day Conference took center stage March 31 in the Campus Center with an event that included a world-famous Indian Hoop Dancer, and speakers who discussed the importance of fostering a better understanding of the world through listening, learning and talking with people of different cultures, genders and points of view.

The theme of the Unity Day celebration was “Unity of Religions & Spirituality.”

The Unity Day conference is organized by the Social Justice and Education subcommittee of the Committee on Campus Diversity and Inclusive Excellence (CCDIE) and co-chaired by Guia Calicdan-Apostle, associate professor of Social Work, and Valerie Hayes, Stockton University Chief Officer for Diversity and Inclusion. The focus of the event was to promote civic learning and foster an environment that values civil debate and critical thinking from multiple points of view.

Calicdan-Apostle said that this year’s Unity Day topic is necessary and should be brought into mainstream discussion.

“The conference will emphasize scholarship as well as lived experiences,” Calicdan-Apostle said, “About 80-90% of college-aged students identify as spiritual or religious. We should be acknowledging each other’s differences in order to become more united.”

Shedia Laguer, assistant director of Student Development, became a part of the committee shortly after her first Unity Day in 2018. Laguer said the subcommittee’s diversity is what was instrumental in making the event happen.

“The subcommittee comes from everywhere,” Laguer said, “We’re all from different departments which gives us different perspectives and strengths.”

Dancers, speakers and a student panel organized by the Campus Religious Council gave visitors a chance to listen and learn, while also talking to people of different cultures and genders.

Below are highlights of the presentations from the day-long event held live in the event room and streamed virtually. 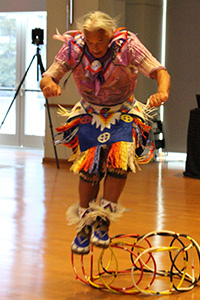 Locke, also known as “Tokaheya Inajin” or “First to Rise”  is Lakota and Anishnabe. A visionary Hoop Dancer, Locke performed for the Unity Day audience with hoops and quick moves as he danced to the music. He spoke about “Native American Spirituality: A Light of Unity.”

Locke is a preeminent player of the Indigenous Northern Plains flute, traditional storyteller, recording artist and educator. He engaged the audience in his dancing and singing and gave Native American sign language and hoop dance lessons.

“The topic today is unity,” said Locke, preparing to play a song about the eagle on his wooden flute. “Unity and spirituality are intertwined. I want to show the relationship today through music and meditation and dance.”

“What we need is prayer. Right now, we need more and more prayer,” said Locke, who dressed in traditional garb for his tribe with his hair braided down past his shoulders. “We are participants in life and through dance, we are responding to be part of creation. The dance and music infuse beauty, harmony and balance. You can’t do without those things. And in doing all of that, we find prayer.”

During the hoop dance, Locke said the hoops showed unity. He gathered the hoops to connect and form a chain and a ball. He showed how removing one of the hoops from the ball caused it to fall apart.

“With unity, we are together. But when we remove one of us or leave someone out, we are no longer all united,” he said. 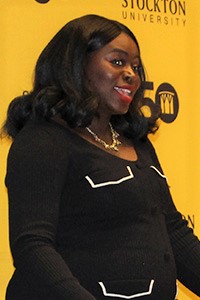 Oluwadare, associate dean for Student Affairs at the Honors College of Rutgers-New Brunswick, spoke on the topic of “Seek Justice, Love and Mercy: A leadership Manifesto.”

While Oluwadare appeared confident on stage, she admitted she hadn’t always felt comfortable with being vulnerable.

“I used to run away from my personal story because I felt shame in it,” Oluwadare said, “But I realized that the dysfunction had valuable lessons that I can share with others now. This time last year, I couldn’t do that, but now I’m confident in myself to do so.”

Her personal story involves her childhood, growing up with a very strict father who demanded order in their household. She described her childhood life as “almost like corporal order.”

“My father had zero tolerance,” Oluwadare said. “I knew accountability was important, but what also was important was to be merciful.”

She said by the 1970s, she learned her father’s way of teaching life lessons “wasn’t forgiving.”

“I do wish he said that it was ok to make mistakes,” she said. “No one should have to earn love.”

Oluwadare used her childhood experiences also to talk about unity and she uses a kinder approach than her father when dealing with others.

“In all, the lesson is to attempt to pursue mercy and justice,” Oluwadare said. “There needs to be a balance.” 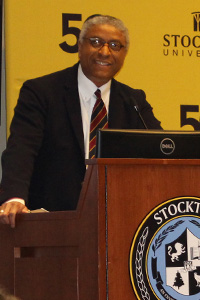 A Professor of Psychology at Franklin & Marshall College, Penn is trained in the fields of clinical and experimental psychopathology.  He is a member of the Council on Foreign Relations and has lived and lectured widely around the world.

Penn, who spoke on the topic: “Reflections on our Common Humanity,” also supported the Federal University of Brazil’s program in peace studies, has been a consultant on the advancement of women for Great Britain’s Secretariat for the Commonwealth of Nations, and has assisted with the Greenland’s initiative designed to reduce gender-based violence.

“Our common humanity and the human spirit. If we think more about it, we can make the world a better place,” Penn said.

He cited examples of inhumanity beginning when Christopher Columbus was welcomed to the new world by Arawak Indians but later applied cruel and genocidal policies that decimated the tribe. He also talked about how others like Adolph Hitler and Adolph Eichmann targeted other groups.

“These were the faces we should never let appear in a world. We should protect others instead of thinking of ourselves,” Penn said. 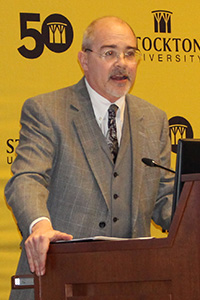 A Stockton University professor of Religion and Clement and Helen Pappas Professor of Byzantine Civilization and Religion, Siecienski spoke on the topic: “Christianity as Humanism: What the Church Learned from the Non-Christian World.”

Orthodoxy is a religion that has survived in the East following the Great Schism of 1054 and created a division, meaning there were two camps - one camp being Catholic and the other Orthodox. He said the second largest Christian denomination, Orthodox Christianity, is anything but foreign to the nearly 300 million worshippers who practice it, he said.

He spoke about unification of Orthodoxy, which he said was a way of being Christian ultimately rooted in the person of Jesus.

“Whether they are Greek, Russian, or American, Orthodox Christians are united by a common tradition,” he said, referring to faith that binds them together despite differences in culture.

“A popular perception of the church is that it has no regard for the human person,” Siecienski said, illustrating his comment with a joke about a priest who met comedian Groucho Marx to say thanks for giving so much joy to people.

“Groucho replied to the priest, ‘And thank you - for taking so much joy away from people,” Siecienski said. 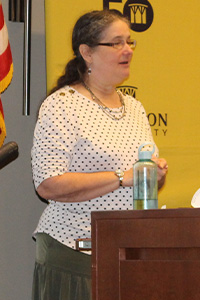 Moses Maimonides was a Jewish rabbi, scholar and philosopher.

She said Tzedakah means “the specific levels of doing right. It is not charity, it means justice.”

Maimonides invented the ladder of giving and each rung explains a higher degree of virtue. Each rung on the ladder represents the level of Tzedekah that the giver is giving. The bottom rung is considered the bare minimum (donating to someone out of pity) while the top rung eliminates the need for Tzedakah.

Lizner related these teachings to social work's Code of Ethics.

The ladder offers a way to show donors an example of how their gift supports a mission. As specific giving amounts are suggested, donors’ expectations are guided. 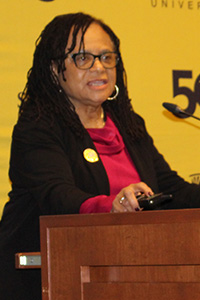 Stockton University Professor Emerita of Anthropology and Africana Studies, Nelson spoke on the topic, “The Multiple Dimensions of the Black Church-The Sacred and The Secular."

Nelson showed the connection of the black church and unity.

“The Holy sanctuary. The House of God. Both are central to a worshiping community. The black church, whether you go to pray on Saturday because you are a 7th Day Adventist or you pray on Sunday as another denomination, a main function of the black church has played is in education, ” said Nelson, who attends Mother Bethel A.M.E. Church in Philadelphia.

She discussed praise houses where enslaved Africans began the black church. Small buildings or cabins were the beginning of black worship for slaves who met in praise houses. It wasn’t the organized worship seen at today’s churches, but rather a place where a slave could come in from the field and sit down and meet to pray with each other.

“It was a place where they could talk in whispers or with their face and eyes, sometimes without words,” she said.  “And in these praise houses they were unified, and they could affirm that they were more than slaves, they were people. Today’s black churches are unified through the call of the minister from the pulpit and the response from those gathered in prayer who call out, ‘Amen’ in reply.

“Many people do not know much of the Bahá’í faith. They are mental health practitioners who followed in their practice. One of the things I am grateful for in the Bahá’í faith is the unity,”  Apostle said.

She explained that the Bahá’í Faith believes “all other religions are actually one-in-the-same.”

“All of the speakers today talked of circles, the ladder, all resonating with us because it is the essence of God. It makes the case there are commonalities in faiths. Mental health teachers and Bahá’í teachers weave all of this together, in mind, body and spirituality.”

The student panel organized by the Campus Religious Council discussed the topic ”Do Religion and Spirituality Matter in the New Normal?"

Participating in the panel were  seniors Kayla Castelli, and Annaliese Sylvester, from the  Stockton Christian Fellowship and Rotio-Christo, sophomores Tara Misiura Kelly Fitzgerald from the Newman Club,  and sophomores Annie Imran and Fatima Khawaja from the Muslim Student Association. Student Christopher Lipari-Pazienza served as moderator and Dianne Stalling is the club advisor.

“I saw everyone around me put all their hopes and joy in everything they do, then COVID took over. But I wasn’t alone in these struggles because of my connection to God and I grew in my faith through my personal connection with God during COVID-19,” said Castelli.

Sylvester said she needed her faith to guide her during the pandemic and when classes went remote last year. “God has protected us as a community, and I’ve grown through prayer, because I had to, and so I don’t go through another season of depression,” Sylvester said.