Rescued Terrapins Returned to the Marsh

Stone Harbor, N.J. -  Seventeen Diamondback terrapins that were rescued and nurtured in the Stockton University animal lab were sent back out into the marshes of Cape May County on June 8 with a little assistance from kindergarten students from Stone Harbor Elementary School. 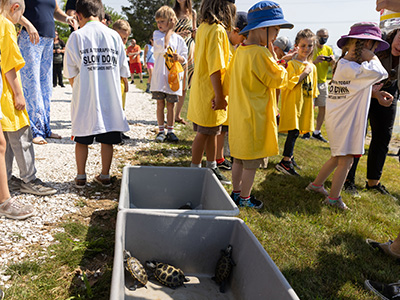 Last year more than 1,000 small terrapins were rescued in Atlantic and Cape May counties. They are released in small groups in the counties where they were rescued.

The “head start” project was hatched more than 30 years ago by Roger Wood,  former research director at the Wetlands Institute and faculty member at Stockton, and Roberta Dean, a kindergarten teacher at the Stone Harbor Elementary School. Since its inception, thousands of terrapins have been released, said current Director of Research and Conservation Lisa Ferguson, helping to compensate for the more than 550 per year who die on the road.

“There is a turtle named Y2K who was released in 2000 and has been seen 20 times since,”  Ferguson said. All of the terrapins are microchipped so they can be tracked. They are typically around seven years old when they begin the produce eggs.

It is currently nesting season for the terrapins, and dozens were spotted crossing Stone Harbor Boulevard, many helped along by local motorists who stop to make sure they get safety to their destination.  But many others don’t make it.

“Getting hit is their primary threat,” Ferguson said. 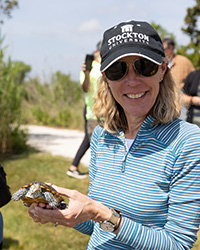 Stockton animal lab employees John Rokita, Melissa Laurino, Lester Block, Justine Ciraolo, along with  the new Dean of the School of Natural Sciences and Mathematics Amanda Norvel and photographer Susan Allen traveled to the Wetlands Institute for the release and helped eight terrapins cross the road during their trip.

“It would have been nine, but a car hit one before Melissa could get to it,” Allen said.

Wildwood Crest resident Salvatore Volpe arrived with a slightly injured terrapin he was hoping the Institute could help.

“A car swerved and just clipped it,” said Volpe, who, along with his children, has been rescuing terrapins since they moved to the area in 2005.

“It’s a slaughterhouse,” he said of the terrapins struck on the roadways. “I do what I can.”

When they returned to campus, Rokita performed an “eggectomy” on a terrapin that was struck on the Margate Causeway and did not survive. He was able to salvage four intact eggs which were placed in an incubator. The eggs are kept at 30 degrees Celsius, which determines that they will all be born females, since those are the terrapins most often killed on roadways. 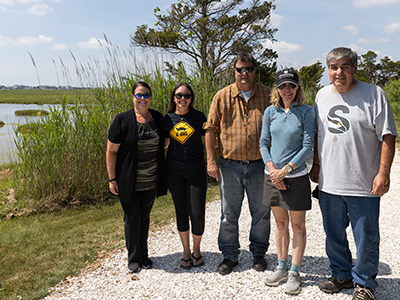 The kindergarten class arrived at the Wetlands Institute wearing bright yellow t-shirts with a turtle crossing sign on the  front and the message “Slow Down” on the back.  They presented the staff with a large mural they drew about terrapins.  They had also raised money for terrapin conservation by selling turtle-shaped cookies, and Sturdy Bank matched their donation.

The children had named the terrapin they would release – there was Diamond and Sparkle, and Sam.  Some eagerly held their terrapins and helped ease them into the marsh. Others were a bit more hesitant about actually touching the young terrapins.  Dean Norvel also got to release one, though she admitted she hadn’t given it a name.

A tip for would-be terrapin rescuers: If you help a terrapin cross the road, place them in the direction they were going.  They can be held with both hands on either side of the shell, but the safest method is to grab them with one hand by the rear part of the shell, tucking your palm like a shovel under the shell by the tail.  Terrapins can move quite quickly when motivated, so shooing them along might be sufficient.