And each time she arrives, the beach is different and full of lessons on how wind and water shape its unobstructed coastline.

The undeveloped Little Beach Island is “a fantastic example of what a natural beach looks like in contrast to engineered beaches,” said Moskalski, who applied for a special use permit to access the protected beach with her class.

The Stockton Marine Field Station crew took Moskalski and her students to the approximately 1,100-acre island that is part of the Edwin B. Forsythe National Wildlife Refuge, located between Brigantine and Long Beach Island.

The 30-minute scenic commute through Great Bay passes the skeletal steel remains of a menhaden processing plant, known as the Fish Factory, that closed in 1969, the same year Stockton was founded.

The students visit in late fall, after they’ve discussed several topics in class, to see, feel and listen to the dynamic beach processes detailed in their textbook.

The vibrant green cordgrass that sways in the summer sea breeze is now a golden meadow shaped into cowlicks by gusty winds. A few remaining goldenrod plants are in bloom, but the migrating monarchs are well on their way to Mexico. Bald eagles have moved into the empty osprey platforms along the saltmarsh.

Elizabeth Bick-Zimmermann and Dave Ambrose, of the Marine Field Station, anchor the R/V Scoter and R/V Rudy Arndt, and they’re just as excited to explore as the students.

After a thigh-deep wade to shore, they follow the raccoon prints to a tidal channel that leads to the ocean side. Class begins.

Witnessing the Formation of a New Island

Moskalski first visited Little Beach in 2016, and since then, she’s visited every other year. In that short time, she’s witnessed the formation of a new neighboring island shaped like a horseshoe.

She first noticed a sandbar close to the surface in 2018. In 2020, it had become a small island, and this year it was a much larger island.

Both birds and boaters have discovered the new land, which is now off limits to people during beach nesting bird season to give threatened and endangered species the chance to utilize the valuable habitat.

The new island is an unexpected lesson in how quickly environments can evolve.

How do Beaches Change?

Beaches evolve through the seasons. “There are seasonal patterns. Around here, wintertime tends to be when beaches naturally erode and summertime is when they naturally build up. That happens because of the differences in wave height,” she explained.

Breaking waves send a swash of water flowing up onto the beach. The amount of water that returns to the ocean is known as the backwash. “The swash is what you see little kids running away from at the edge of the ocean,” Moskalski said.

The upward flowing swash and the backward flowing backwash each have a velocity, and the one with greater velocity is the direction that the sand will build up because sediment follows the water.

“The waves that swash up have an opportunity for some of that water to sink into the beach, and when that happens, there’s less water backwashing than there was swashing. If we have a big long swash, our backwash is going to be weaker, and we’re more likely to push sediment onto the beach—this is what happens in the summer,” she explained.

Winter is a different story.

“Storms generate bigger waves that break with greater downward force, plunging straight down, and the result is that there’s not a lot of swash traveling up the beach face. Therefore there’s more water still available in the backwash and the backwash velocity is faster and more likely to erode,” she said.

The sand that left during winter storms eventually returns.

Leave it Better Than You Found It

There is no tractor to tow a rake for beach sweeping, nor any visitors to leave behind litter, but there is plenty of trash on Little Beach that washes ashore from the bay and ocean.

Over the years, students reflect on how much trash they find during the field trip. Now, Moskalski comes prepared with trash bags.

By the end of the lesson, each student has a full bag of trash. This year, they started to brainstorm ideas on how to collaborate with art students on a project to raise awareness.

A History Lesson from Stewart Farrell

Little Beach Island is uninhabited, federally-owned wilderness, but it wasn’t always that way.

“I have an 1883 prospectus selling lots on Little Beach at $400 a piece. Oceanfront was $600. It was called Island Beach back then,” said Stewart Farrell, founder and director of Stockton’s Coastal Research Center.

The state of New Jersey planned to build a highway to Atlantic City from Trenton, which would have utilized Little Beach in a series of steel bridges, but steel prices skyrocketed during World War I and the bridges were never built.

Farrell first became aware of Little Beach from the pages of a 1960s oceanography textbook that used it as an example to show “dramatic changes in the island over a period of about 30 years.”

His work with the Coastal Research Center took him to Little Beach.

A nuclear power plant was being planned offshore of Long Beach Island, and every two weeks from 1972-75, Farrell surveyed five sites on Little Beach.

And then “Three Mile Island ended all considerations for nuclear power plants on the oceanfront,” Farrell said, referring to the partial meltdown of a reactor in Pennsylvania.

Two years ago, the Coastal Research Center surveyed Little Beach for two years for NJDEP. “That work involved surveying the beach changes related to dredging that took place in Little Egg Inlet channel. The state mined about 2 million yards of sand for Holgate from clearing the channel. Part of the permit requirements were that we survey the beach changes to see if there were any,” he explained.

That’s when he discovered the new horseshoe-shaped island.

At one time, there were seven or eight houses on Little Beach and a three-story 1880s lifesaving station with a wooden walkway through the marsh all the way to the beach.

Judge Haneman had a house there as well as the Parker Brothers decoy carvers, and in the 1970s, Rutgers students studying ornithology lived in the lifesaving station during their field work, recalled Farrell.

“I’ve spent many, many hours walking Little Beach and probably won’t step foot on it again in this lifetime, but we’ll see,” Farrell said.

As far as the future for Little Beach, he said it will stick around, just not in the same spot.

“It’ll move westward. It can move, and it has moved since I set foot on it in 1966. It has moved landward a quarter mile. It’s not going to submerge. It’ll move landward and upward as sea level rises because it can. And it’s the only one that can do that in New Jersey. The rest of them will submerge,” he explained.

Little Beach is here to stay because it can. “It's free to do so. There are no barriers, no rubble piles that would mitigate moving the sand further west,” he said. 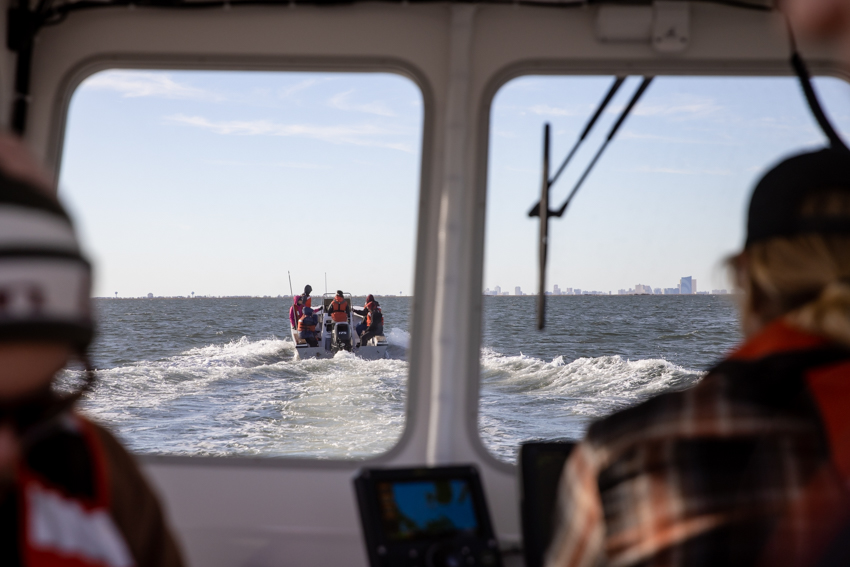 Elizabeth Bick-Zimmermann leads the way in the R/V Scoter while the second half of the class rides with Dave Ambrose in the R/V Rudy Arndt. 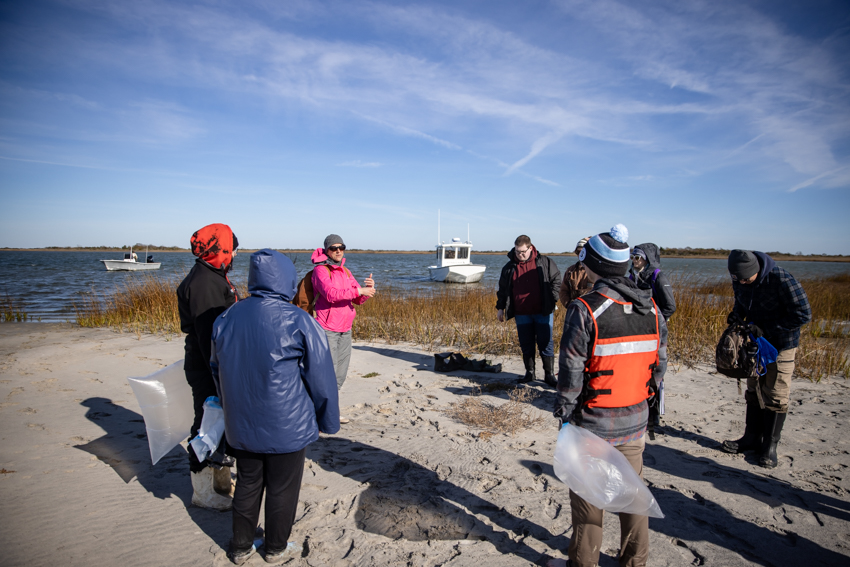 Foul weather apparel and waders keep students warm and dry as they explore the beach. 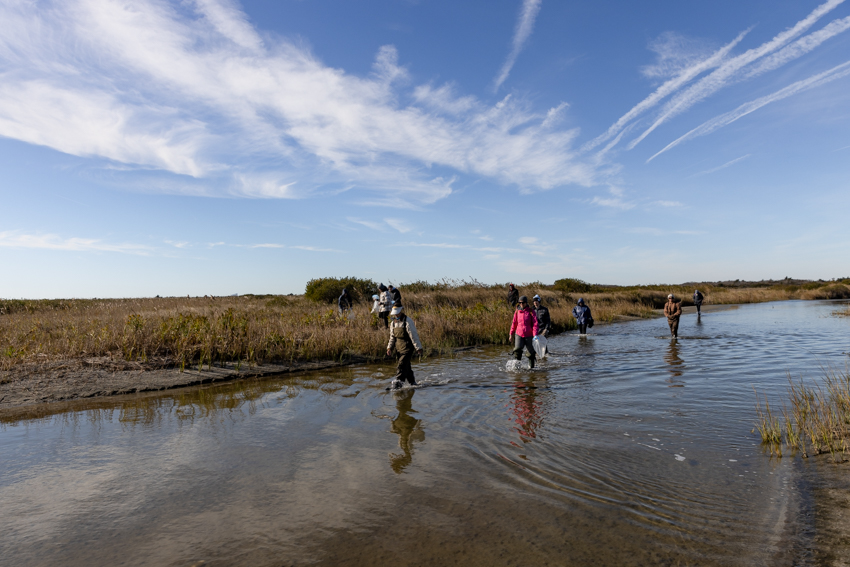 The walk to the beach along an evolving tidal channel is part of the lesson. “There used to be an overwash cut from a big storm that flattened out one of the dunes. It’s been interesting for me to see just the remains of an overwash fan becoming a tidal channel and now the tidal channel starting to meander and getting point bar and cut bank deposits. All throughout that area, depending on where the tide is, you can see ripples and bedforms (shapes of the sand) from the flowing water as the tide comes in and flows out. The dunes are starting to build back in from the storm that created the cut," said Moskalski. 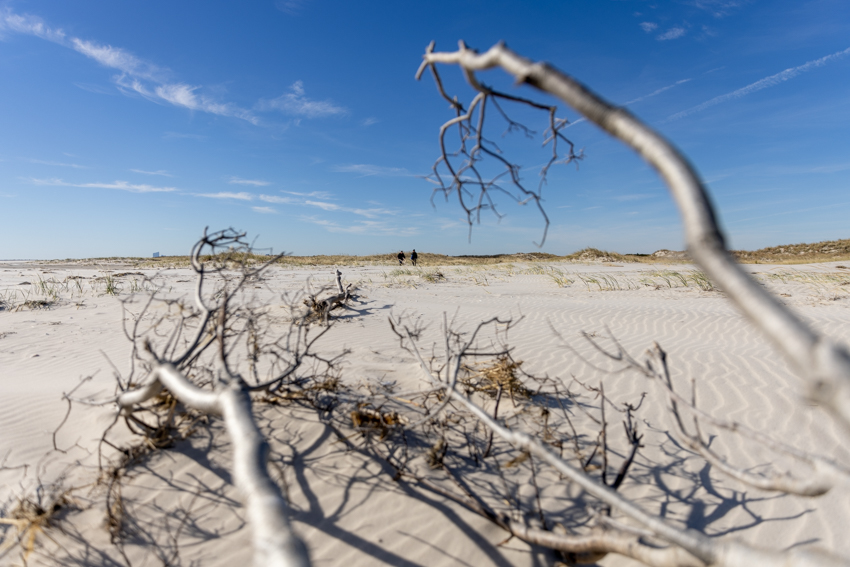 Just prior to the students arriving on the beach, a few bald eagles were sitting at the edge of the water. 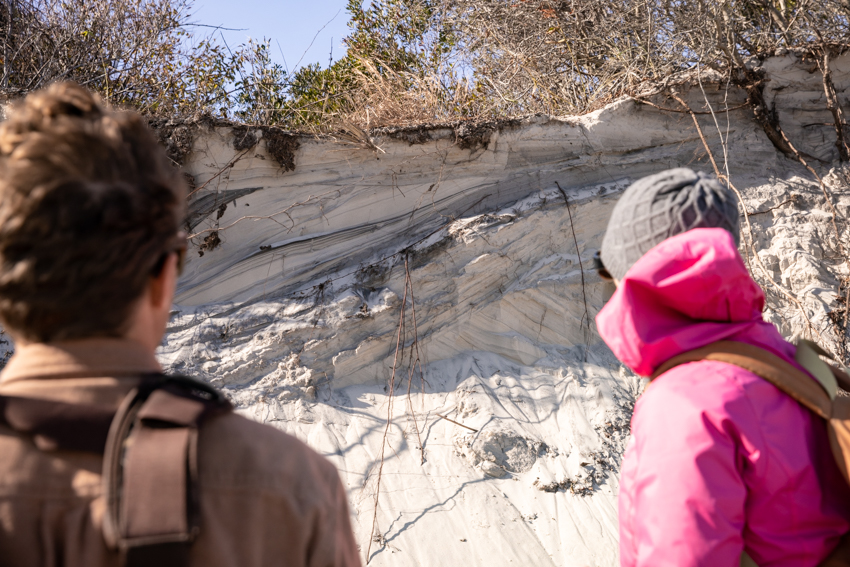 A beautiful example of cross-bedding in a dune illustrates beach changes in layers. 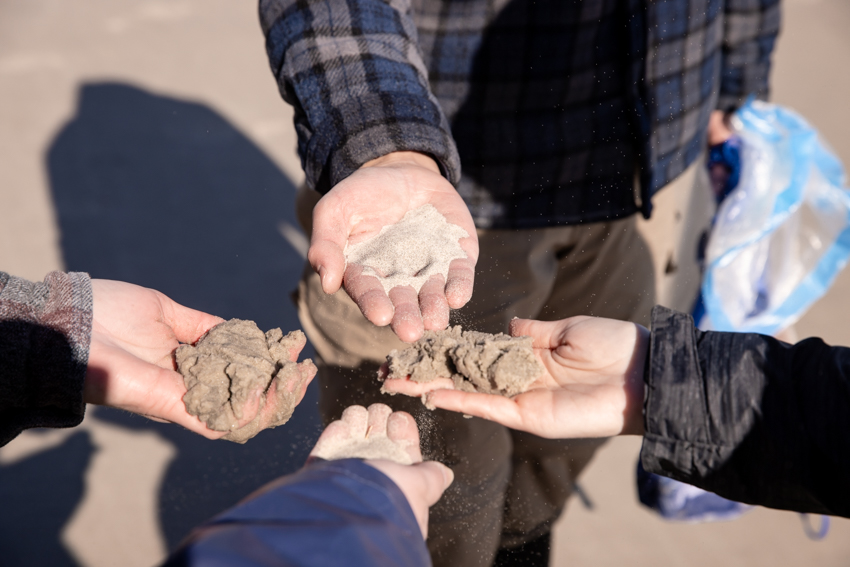 Moskalski instructs the students to scoop up a handful of sand from the dunes and another handful from the intertidal zone. “It’s not as easy to see the difference, but you will feel it,” she said. “Sand in the high energy swash zone is coarsest because the grains are too heavy to get washed away. When the tide is down and the sand dries, the wind blows the finer grains that are easier to transport,” she explained. 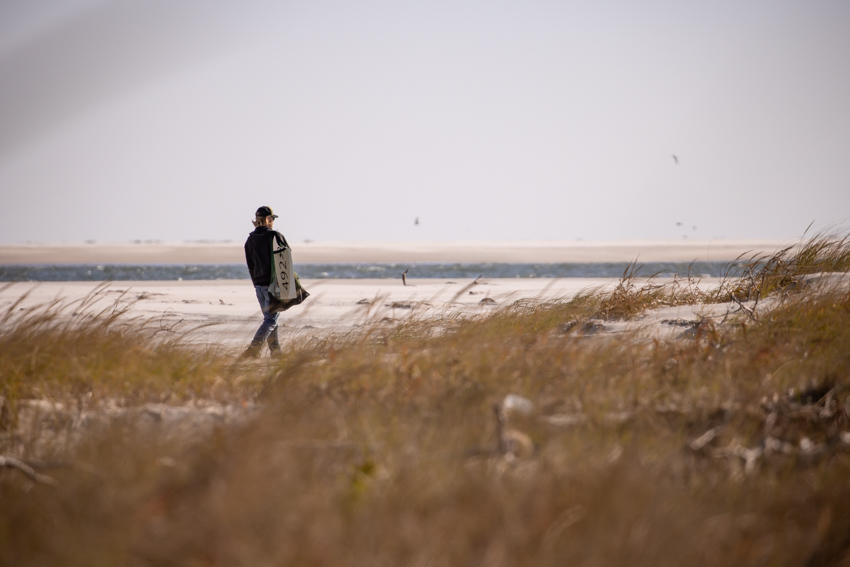 Dave Ambrose comes prepared with a bag that he fills with beach litter. 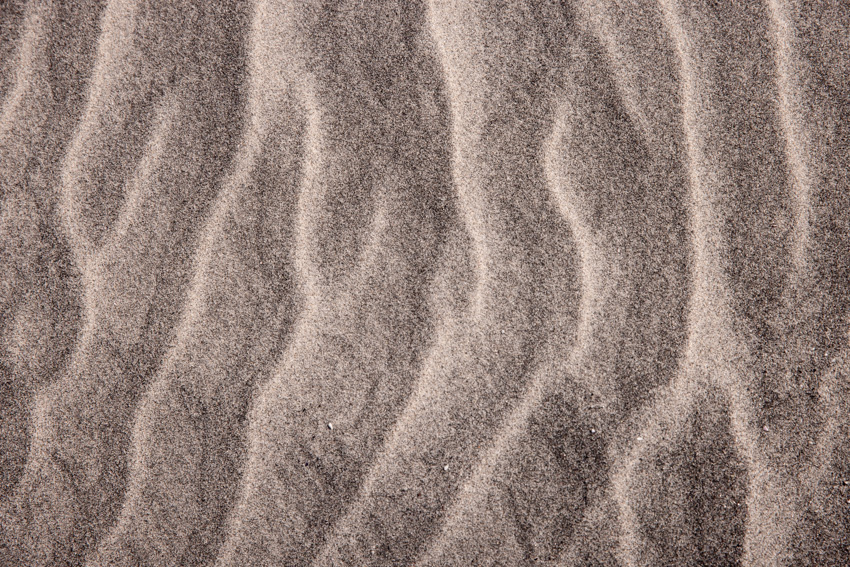 Wind draws ripples in the sand.

Part of the lesson teaches the class to leave the beach better than they found it. 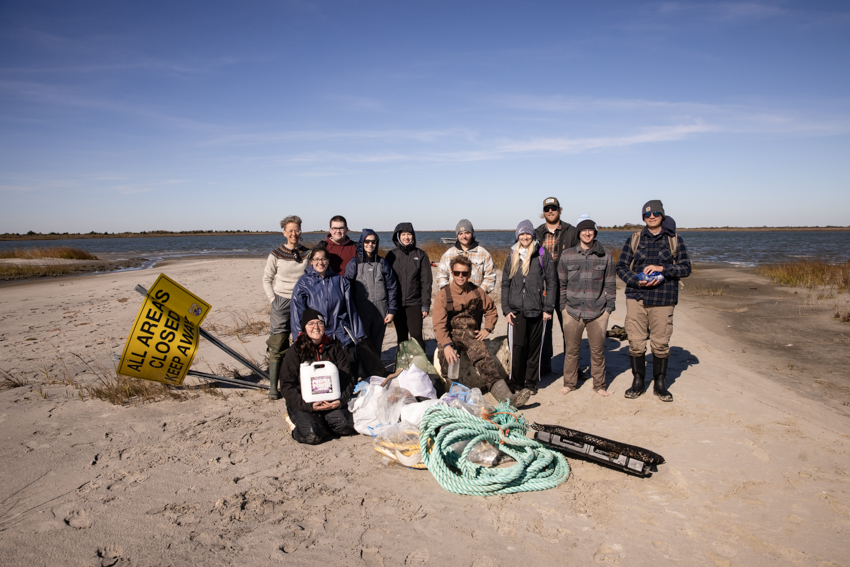