Galloway, N.J. – There’s a lot about the U.S. Secret Service that its director, James Murray, can’t talk about.

But the secret to getting into the Secret Service and being successful Murray told students at Stockton University March 22 is a combination of character, attitude, self-discipline, perseverance, resilience and consistency.

“Just try to do a little bit more, and do it a little bit better, each day,” Murray said. “The road to mastery is to tolerate being a beginner over and over.” 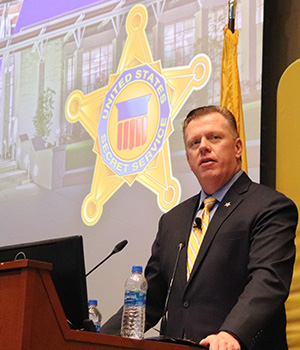 The 2022 Criminal Justice Lecture Series keynote speaker, Murray, said being in law enforcement is not a requirement to work for the Secret Service.

“We are primarily known for our protection work,” he said. “But we also do investigations. Only about half of our people are special agents.  We have doctors and engineers and photographers.”

The son of a New Jersey State Trooper, Murray said he knew he wanted to go into law enforcement and applied to the Secret Service because the State Police at the time were not hiring. He was influenced by the assassination attempt on then President Ronald Reagan.

“The media kept showing the video (of Reagan surrounded by Secret Service agents) and I said to my dad, ‘I think I might want to do that,’ ” Murray said.

It took him three years to get hired, during which he went to graduate school.  He said the screening process and background check are thorough and students should be already thinking about what they post on their social media and how they want a prospective employer to see them.

“Be mindful of the decisions you make,” Murray said. “It is a serious vetting process and includes a polygraph.” 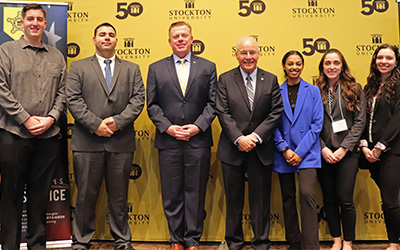 A student asked if it might be a red flag today to have no social media presence at all, and Murray said no.

He said one of the most valuable skills today is the ability to speak more than one language.

He noted that cybercrime is a growing field, though the Secret Service still deals with counterfeiting, which is why it was originally created by President Abraham Lincoln.

“The dollar is the world’s reserve currency right now, and protecting that is national security,” Murray said.

The Secret Service also held an information session for students, and Murray encouraged those who might be interested to apply.

“I see this as answering a call,” he said. “Being in the service is being of service.”