Leo S. Ullman stands next to some items in the $1 million collection of Nolan Ryan memorabilia that he donated to Stockton University during a reception at the Noyes Arts Garage in Atlantic City.

She and her husband, Carlos, had moved to Galloway Township earlier this month when she saw a notice online for a “pop-up” memorabilia exhibit and reception at Stockton University for her favorite player — Nolan Ryan.

Earlier this year, Stockton received a donation from Leo S. Ullman of his vast collection of Ryan memorabilia, appraised at more than $1 million. Select items are on display at five different campus sites.

And the university announced this week the public viewing will be extended to Feb. 26, just as one of Ryan’s former teams, the Houston Astros, will face the Philadelphia Phillies in the 2022 World Series. 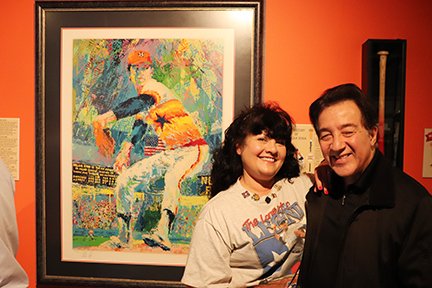 “I had to come. I saw it and I said, ‘This is an omen,’” said Colon, a Bronx, New York, native, who was decked out in a “Ryan Express” T-shirt and matching Rangers purse, watch and several pins. “I loved it. I can’t wait to see the other exhibits at the other locations.”

Colon was just one of a number of people who came to a public reception for the collection on Oct. 17 at the Noyes Museum Arts Garage in Atlantic City. Items from the more-than-13,000-piece collection are displayed at the Arts Garage and John F. Scarpa Academic Center in Atlantic City, the Richard E. Bjork Library in Galloway, Kramer Hall in Hammonton and Stockton University at Manahawkin.

“The Nolan Ryan pop-up exhibition will go into extra innings,” said Michael Cagno, the executive director of the Noyes Museum of Art of Stockton University. “This will allow extra time for visitors to round the bases and check out the five Stockton sites.”

A signed cowboy hat, an autographed horse saddle, a signed stadium seat, hundreds of baseball cards and even a stuffed toy with Ryan’s likeness were some of the things on display at the Arts Garage.

“There’s just a lot of interest in baseball memorabilia right now, and I think Nolan Ryan specifically,” said Ullman, who was at the reception. He mentioned the new documentary “Facing Nolan” on Netflix and the fact that a Mickey Mantle baseball card in mint condition sold for $12.6 million in August.

Leamor Kahanov, Stockton’s provost and vice president for Academic Affairs, told Ullman that the collection will be used in the future as part of an American sports history class and a collections class. She also said there are plans to have a permanent home for the collection as part of the university’s Sports Center expansion plans.

- Story and photos by Mark Melhorn