Some of the 15,000 items in the memorabilia collection are being displayed at the Noyes Arts Garage in Atlantic City. A reception for the exhibit will be held there at 5:30 p.m. Oct. 17.

Galloway, N.J. – Baseballs, bats, gloves, hats, jerseys and cards. These are just some of the more than 15,000 items comprising the vast Nolan Ryan collection donated to Stockton University by Leo S. Ullman.

A signed cowboy hat, an autographed horse saddle, a signed stadium seat and even Beanie Babies are also part of the unique assortment of memorabilia, some of which is on display at five Stockton locations. 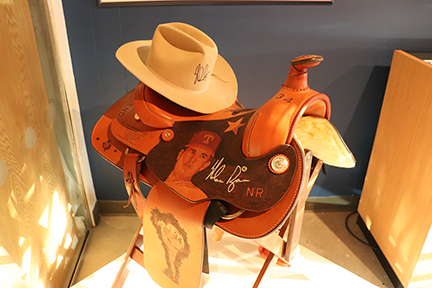 The Richard E. Bjork Library in Galloway, Kramer Hall in Hammonton, Stockton University at Manahawkin and the Noyes Arts Garage and Stockton’s campus in Atlantic City are all locations for a new “pop-up” exhibit on display until Dec. 11. A public reception for the exhibit will be held 5:30 p.m. Oct. 17 at the Arts Garage, and Ullman will attend.

“We’ve had calls from all over the country about Stockton receiving the collection,” said Dan Nugent, vice president for University Advancement and executive director of the Stockton University Foundation. “Our faculty and students will be making use of the items in the spring, but we wanted to get some of them on display as soon as possible to give the public access.” 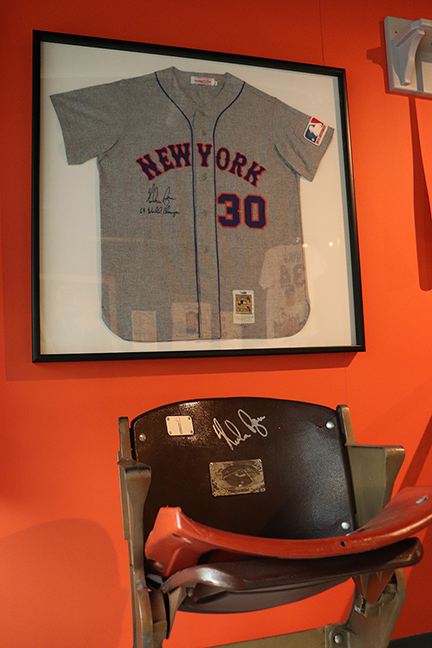 The real estate investor and former owner of the Shore Mall in Egg Harbor Township donated his collection to the university this year. Stockton is also developing a class to be offered in the spring that’s tied to the collection, which is believed to be the largest of its kind in the world and is appraised as worth more than $1 million.

“I tried to get a cross-section of memorabilia that the donor had collected that told the story of Nolan Ryan,” said Michael Cagno, the executive director of the Noyes Museum of Art of Stockton. “It’s called a pop-up exhibit because it’s not long-term. But pop-ups are also tied to baseball, and the five sites are like the four bases of a baseball diamond and the pitching mound where Ryan dominated during his remarkable 27-year career.”

Cagno said the largest display is at the Arts Garage. The walls of the room are painted in the orange and blue colors of the Houston Astros, the team that Ryan spent nine seasons with.

The exhibit at Kramer Hall features display cases and wall art. Other items, including hats and statues, are on display in Manahawkin and on the second floor of the John F. Scarpa Academic Center in Atlantic City. Throughout all the sites are cards detailing Ryan’s career and lesser-known facts about his life, including that he would soak his fingers in pickle juice between games to help prevent blisters.

“The goal was to really tie in the different sites,” Cagno said. “Your true die-hard fan, maybe they could go to all of the sites and then also get to investigate Stockton at a different level.”

The Bjork Library is located at 101 Vera King Farris Drive in Galloway Township. The Noyes Arts Garage is at 2200 Fairmount Ave. in Atlantic City. The John F. Scarpa Academic Center is at 3711 Atlantic Ave. in Atlantic City. Kramer Hall is at 30 Front Street in Hammonton. Stockton University at Manahawkin is at 712 E. Bay Ave. in Stafford Township.

-- Story and photos by Mark Melhorn