Atlantic City, N.J. – Two of the area’s most dedicated rowing supporters, Sue Peterson and the late Dr. John Holland, were honored by Stockton University, family and friends at the Rowing and Growing with the Ospreys event at Stockton Atlantic City on March 25.

In 1957, Holland started the Viking Rowing Club in Ventnor, which has since trained thousands of rowers of all ages and abilities. Peterson worked tirelessly behind the scenes as former president of the South Jersey Scholastic Rowing Association for 16 years and a member of the Board of Directors, coach, and regatta director for the Atlantic County Rowing Association for 29 years. 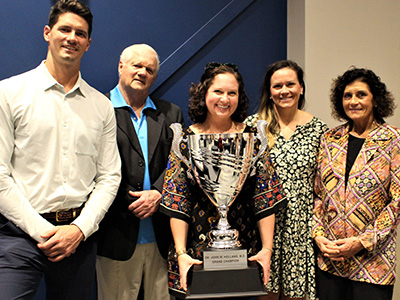 Holland’s granddaughter, Meghan, spoke on behalf of the family, saying that her grandfather was still making house calls into his 80s. He inspired her to row – sometimes showing up in freezing weather, but promising donuts from Mino’s after they were done.

“When I was a lifeguard, I’d see him coming with his oars,” Meghan said. “He loved it, and he made you love it.”

She recalled beginning a 9-year-old “chicken dipper” as the youngest rowers were called and growing up to watch other young people get involved.

“How wonderful it is to see a nine-year-old do a sport they didn’t know they could do then grow and improve,” Meghan said.

Her father, Ward Holland, one of the original club members, has continued the family legacy as vice president of Viking Rowing Club.

“My grandfather really, truly loved this community,” Meghan said. “It is a great honor to have his name mean so much to so many people and be so synonymous with rowing.”

On display at the event was a new John Holland trophy. 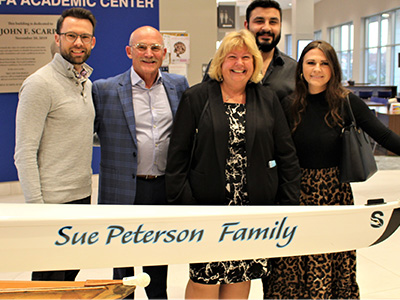 “I could never say no to Sue because she said yes to so many,” D’Amico said. “No matter what the task, she got it done.”

Speaker Joy Cress, a longtime friend and rower said Peterson was finally getting the accolades she deserves.

“She did it all, whether it was event organizer, or food supplier,” Cress said. “Without her, many rowing events would not have been possible or as successful. No matter the challenges, she has always managed to rise to the occasion and get the job done. She doesn’t like the spotlight, but she deserves it.”

Peterson said she does prefer to be behind the scenes.

“My motto is – it’s all about the kids,” Peterson said. She noted that when Stockton named a boat after her, she asked that it be called the “Sue Peterson family” and that included everyone who has every worked with her in rowing.

“That family isn’t just the people you’re related to,” she said, acknowledging family members at the event. “It’s also the people who have had your back. We have many families.”

Peterson also thanked her husband John, who, she said, didn’t know what crew was until he was the finish-line flagman at the first regatta.

“He’s been to every one since,” she said,” and stayed after with me to make sure the garbage was taken out.”

Stockton President Harvey Kesselman, whose daughter rowed, said it was people like Peterson who helped many area rowers succeed in high school and college.

“Rowing is important to us at Stockton,” Kesselman told the audience. “We want them to win a national championship and with your support we can do that. Thank you for showing our students they are valued.”

- Story and photos by Diane D’Amico