Galloway, N.J. - “It was an eerie sight,” said Elizabeth Parsons, who discovered more horseshoe crabs than she could easily count stranded on the beach about a mile from Stockton University Atlantic City.  She noticed the crabs on an unseasonably warm February day.

“It made my heart sick,”  said Parsons, a Stockton Psychology and Education graduate who teaches graphic design at Atlantic City High School.

With only an hour of daylight remaining, she overturned as many as she could and carried them down to the water, but she wanted to do more. 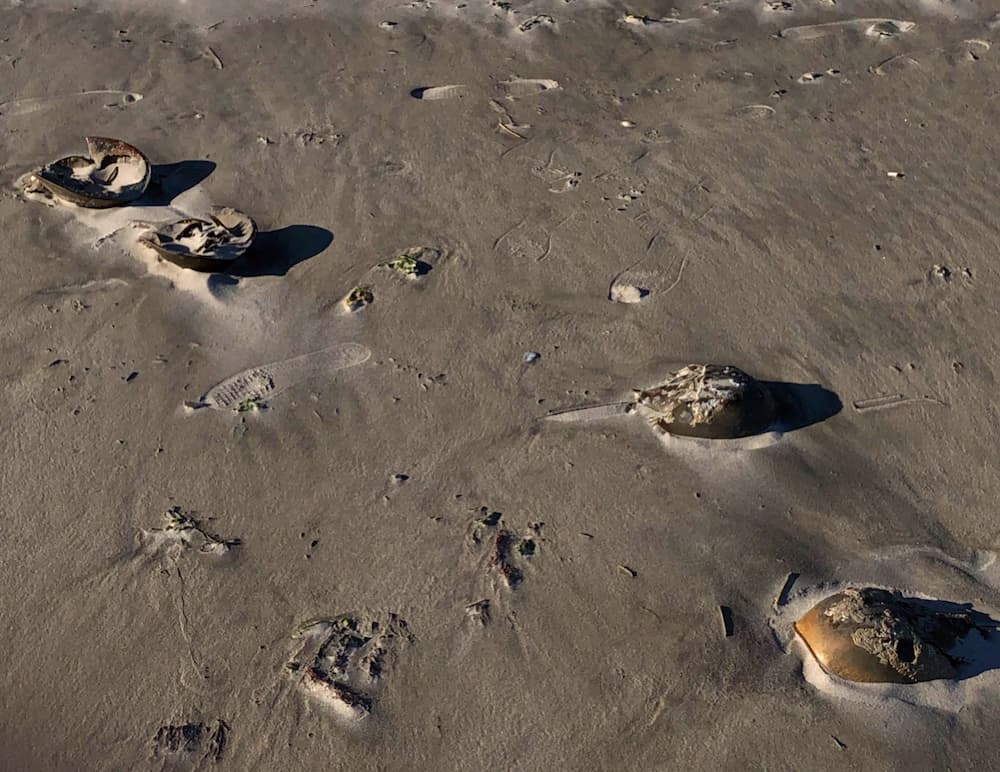 Ian Jaworowski, a sophomore Marine Science major and treasurer of the Marine Science Club, was at the Field Station working on a coral tank for the Aquarium and Aquaculture Club when he got a text looking for volunteers to respond to the stranding.

“I finished up quickly because I wanted to get down there to help,” he said.

By the time he got to the beach, it was frigid and icy. “The sand was being picked up by the wind and even with four to five layers and a heavy coat, it was still ice cold,” he said.

He estimates there were about 100 crabs scattered on the beach in Ventnor City at South Baton Rouge Avenue along the high and low tide lines, but none anywhere between.

He noted that many had perished, but fellow Marine Science Club member Mackenzie Briggs found one that wiggled its legs when she picked it up. She returned it to the ocean, and it crawled back out to sea.

Seth Sims, treasurer of the Stockton Fishing Club, and others also went to the beach to help return crabs to the water.

Gulls feasted on the crabs that didn’t survive.

Jaworowski grew up in Ridgefield Park, not far from metropolitan New York, but he discovered at an early age that the coastline is where his passion lies.

“When I watched Jaws, instead of being terrified, I was intrigued by the character Hooper, the biologist, and I knew that’s what I wanted to do,” he said.  His interest in marine life also earned him the nickname Jaws.

In late January, Nathan Morell, assistant director of Counseling Services, discovered stranded horseshoe crabs in Ventnor City that froze during a blizzard before they could make it back to the ocean. Photos: Nathan Morell

Horseshoe crabs spend the winter months offshore on the continental shelf. Jaworowski theorized that the high winds kicked up a strong swell that pushed the crabs ashore.

Quinn Whitesall, a 2012 Marine Science graduate and current student in the Stockton Coastal Zone Management PSM program, was  reminded by her Facebook memories that horseshoe crab strandings are not an uncommon winter occurrence. She has seen this happen before along the Jersey shore.

Whitesall is a habitat restoration coordinator for the American Littoral Society and works with volunteers to tag and survey horseshoe crabs in May and June when they crawl ashore to spawn.

“Storms off the coast churn up the water, the crabs get caught in the currents and then get stranded on the beach. They can stay out of the water for a period of time,” she said, but not too long.

She described their accordion-like gills as the pages of a book. “The gills need to stay damp to get oxygen. They can’t breathe when they dry,” she explained.

When crabs get flipped upside down, the sun can dry out their gills, especially in the summer.

Overturned crabs should be flipped over so they can return to the water. They should never be picked up by their tails, which they use to right themselves. Rescuers should also be careful to not place their fingers near the hinge that connects the two main parts of the shell (prosoma and opisthosoma).

The species is often called a living fossil because “they have remained virtually unchanged for 400 million years,”  Whitesall said.

Parsons was happy to see students lending a hand on the beach and spreading awareness on the Marine Science Club Instagram page to educate others on what to do in the event of future winter storms.