Galloway, N.J. – Stockton University students Sophia Bradach and Patrick Moore were named the 2022 Heroes of the Year by the John R. Elliott HERO Campaign for Designated Drivers at a ceremony April 14.

Bradach, a junior Environmental Science major from Point Pleasant, regularly volunteers to be a designated driver and promotes healthy and safe behaviors in her roles as a residential advisor and Wellness Center peer educator at Stockton. 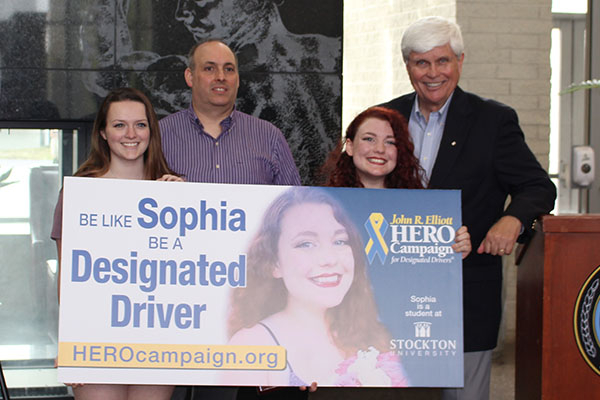 She said she would use her platform as a HERO ambassador to continue educating others. “I feel it is really important to be a designated driver. I see so many students who struggle to find information to make informed decisions about drinking and driving.”

Moore, a senior Exercise Science major from Midland Park, was inspired to volunteer with the HERO Campaign following an alcohol-involved crash that seriously injured his brother, Ryan. A designated driver had picked up Ryan and his friends, but they were struck by a drunk driver near The College of New Jersey.

“I’m glad I came to Stockton so I could use the HERO platform to talk to students,” he said.

Bradach and Moore will be spokespeople for the campaign and will be featured on Hero Campaign signage. ClearChannel has donated a billboard on the Atlantic City Expressway to promote the use of designated drivers to reduce drunk driving. 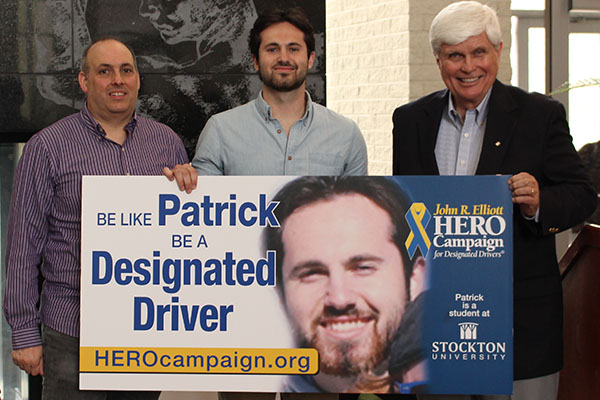 The Hero Campaign is named for Ensign John Elliott, an Egg Harbor Township resident and graduate of the Naval Academy, who was struck and killed by a drunk driver on his way home for his mother’s birthday in 2000. His family started the John R. Elliott Foundation and HERO Campaign that year.

Since 2010, Stockton has partnered with the Hero Campaign on the Hero of the Year program and the HERO Games on campus, in which members of the university’s Greek organizations compete and raise awareness of the campaign. This month more than 150 students participated in the games and signed the HERO pledge, said Joe Thompson, assistant director of Student Development.

Elliott’s father, Bill, praised Bradach and Moore for their efforts to promote safe driving, noting, “if only the driver who hit John had a designated driver drive him home, our son would be here today.”

Bill and Muriel Elliott recently announced the creation of The John R. Elliott Character & Leadership program at Stockton. The Elliott Leadership Program is a certification program that is inspired and based in part by the Naval Academy’s Capstone Officer Leadership Seminars which are presented in memory of Ensign John R. Elliott. Applications for the program are due May 6.

More information about the Hero Campaign is available at HERO Campaign.org.

-Story and photos by Stacey Clapp