Galloway, N.J. - Some two hundred years ago, at the start of the War for Greek Independence, chieftains issued an appeal to Americans to support their fight for independence from occupation by the Ottoman Empire. Greek Independence Day has been celebrated since on March 25. 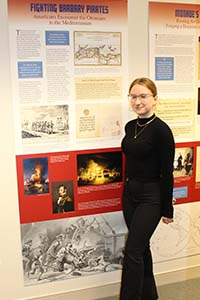 The Pappas Center for Hellenic Studies at Stockton University partnered with the Maliotis Cultural Center of Hellenic College Holy Cross in Massachusetts on a bicentennial anniversary exhibition, “The Greek Revolution through American Eyes,” which is now on display in the Constantelos Hellenic Collection and Reading Room in the Bjork Library at Stockton’s Galloway campus. The exhibit was co-directed by Professor of History Tom Papademetriou.

Panels from the exhibit will also be displayed at the annual Rev. Dr. Demetrios Constantelos Memorial Lecture at 6:30 p.m.  April 26 at the John F. Scarpa Academic Center at Stockton Atlantic City. The guest speaker will be the scholar who inspired the exhibition, Constantine G. Hatzidimitriou, who will speak on “Philanthropy: America’s Most Significant Contribution to the Greek Revolution of 1821.”

“This is a 200-year-old story that explores the common themes binding Greece and the United States in Greece’s pursuit of universal freedom and liberty. But it is an issue we are watching again today in Ukraine,” said Papademetriou. “The international humanitarianism by common citizens we see today was actually invented during the Greek revolution. This is probably the most significant theme of this exhibit.”

Sixteen international scholars, including Stockton Professor David Roessel, wrote essays for the exhibit. The curatorial team included three Stockton students and two students from the Hellenic College in Brookline, Mass., who began their work in November 2020, meeting weekly through Zoom and researching documents.

The result is 22 panels that tell the story of the American role in the Greek Revolution, including the influence of Thomas Jefferson, the Monroe Doctrine, the abolitionist movement, and the philanthropic role of aid provided to the revolutionaries, and more  importantly, to the starving Greek people.  The essays and primary source documents can be seen with the online exhibit at greekrevolution.org. 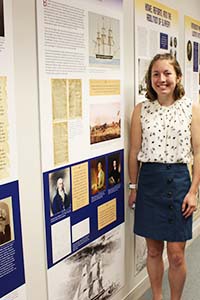 Sophia LoPresti of Voorhees and Shaun Steup of Atlantic City, both students in the M.A. in American Studies program, and Olivia Harris of Sammamish, Washington, a senior majoring in Historical Studies, said the project took a lot of research, and a lot of editing, but also taught them valuable skills for doing historical research.

“Finding sources for some of the photos was really hard,” LoPresti said. “I had to do a really deep dive, but it was also really beneficial in learning how to do this kind of research.”

“We researched photos, maps and newspapers,” Harris said. “Then we had to decide what was significant enough to use.”

LoPresti and Harris each focused on one panel and Steup worked on preparing material for the project’s website.

“We couldn’t put everything in the exhibit, but we can put it online,” said LoPresti who focused on the panel on “Fighting Barbary Pirates.”

Steup said each panel of the exhibition has a link on the website, so viewers can view it in sections.

A smaller 14-panel exhibit is also available for touring through the Hellenic Federation of New Jersey.  A Greek version for Greece was also created through collaboration with the Museum of the Macedonian Struggle and the Laboratory of Narrative Research at the School of English of Aristotle University of Thessaloniki.

The exhibit is open to the public daily during Stockton library hours.