Galloway, N.J. –  The First Amendment to the Constitution protects speech regardless of how offensive the content, said Frank L. Corrado, an Attorney and Adjunct Professor at Stockton University, speaking to faculty and students Wednesday.

Corrado engaged Stockton University students and faculty virtually March 2 in discussing ‘Back to Basics: The First Amendment in the College Classroom.’

“You at Stockton are protected by federal and state constitutions,” Corrado said. 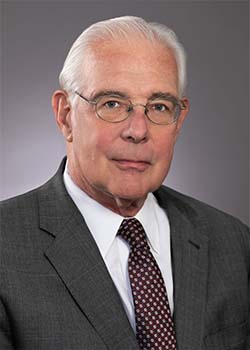 Restrictions of speech at colleges and universities isn’t only considered censorship, but a First Amendment violation, he said.

The discussion, which focused on First Amendment issues and covered the topic of hate speech, was sponsored by the Constitution Day Committee, William J. Hughes Center for Public Policy and the American Democracy Project/Political Engagement Project at Stockton.

Corrado, a lawyer specializing in civil rights and constitutional law, is a past president of the American Civil Liberties Union of New Jersey. A graduate of Harvard and Rutgers-Camden Law School, he served as an adjunct professor at Stockton and was a reporter and editor at The Press of Atlantic City before becoming an attorney.

“For our purposes (in this discussion) it is fair to say the purpose of the First Amendment is to protect fair public debate including issues of government, issues of social importance. The idea here is to open debate. By encouraging free discussion, you become more informed and therefore, society functions better with a debate on public issues,” he said.

In a question-and-answer period that followed, a student asked Corrado if the First Amendment protected Key of David, a non-denominational group that rallied in October 2021 outside Stockton University.

Corrado answered the question using a federal court case, Snyder V. Phelps in 2011. Marine Matthew A. Snyder died in Iraq and activist members of the Westboro Baptist Church picketed Snyder's funeral in Maryland – the same way it had done at thousands of other funerals throughout the U.S. in protest what they claimed was increased homosexuality in the United States. Picketers, who were located approximately 1,000 feet away on public land, displayed signs that read  “You’re Going to Hell,” and “God Hates You”.

Snyder's father sued Fred Phelps, Westboro Baptist Church. The U.S. Supreme Court ruled that the First Amendment prohibited the imposition of civil liability upon a church and its members who picketed the funeral. The court determined that the speech was related to a public issue and was completely protected, Corrado said.

The First Amendment guarantees freedoms concerning religion, expression, assembly, and the right to petition. It forbids Congress from promoting one religion over others or restricting an individual's religious practices.

Often, speech gets put to the test if the speaker is someone with whom people don’t agree. However, Corrado reminded that even speech that is very offensive warrants the same constitutional protection because of the right of free speech.

“The mere fact that this speech may make you uncomfortable is not enough,” Corrado said. “The First Amendment requires us to tolerate speech that makes us uncomfortable and fearful, so long as there is no threat of death.”

Corrado was asked, how “hate speech” differs from speech that someone hates.

“Hate speech is a term that is speech that is demeaning. The other is a way of describing that the First Amendment doesn’t allow the government to regulate speech just because the people don’t like it. The first amendment is there to protect an individual’s rights. So, even if 99% of the people think it’s deplorable or dishonest, it doesn’t mean government has the right to ban it just because a lot of people don’t like the speech.”

Corrado was asked about whether Confederate flags on cars parked at Stockton could be banned as a form of hate speech. “Not without demonstrating that flags are causing an imminent threat of disturbance,” he said.

Corrado recalled an incident in 2016 where Confederate flags were placed on Cape May beaches. “I had to politely explain to angry residents of Cape May that without example of imminent disturbance they would have to look the other way,” said Corrado, who at the time was the city solicitor.

“I am more on the side of allowing the speech,” Corrado said. “It is not enough to let the government pick and choose among viewpoints. A classic example: If you can ban a confederate flag, can you ban a rainbow flag? It would be a huge mistake from my opinion and from a free speech point of view.”