Galloway, N.J. - Students researched food insecurity in Professor Trina Gipson-Jones Teamwork & Collaboration in Health Care class in the fall. But they got a personal understanding of the impact of not having access to healthy food when they interviewed several Atlantic City residents about their own experiences. 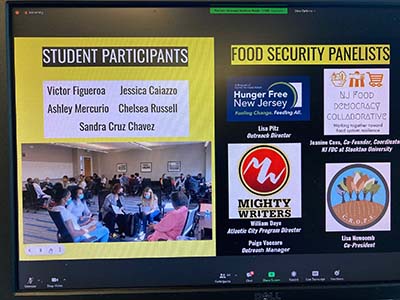 “I learned about food insecurity in class, but I didn’t really see it until I talked to the elders and saw how it impacts them,” said student Jessica Caiazzo during a special panel discussion on Food Security hosted by the Stories of Atlantic City Intergenerational Storytelling Project and Gipson-Jones’ class.

Connecting people to projects and policy was the theme of the discussion, which also featured presentations by groups working on hunger issues in Atlantic City.

Gipson-Jones said the story circles the students participated in with the Atlantic City residents were a very effective way to give students a deeper understanding of and reflect on food insecurity and how it relates to health disparities.

The students said being able to meet in person with the elders of Atlantic City gave them a deeper perspective.

“I had never engaged with older people to talk about this,” said student Victor Figueroa.

Sandra Cruz Chavez said the in-person meeting allowed for “genuine interaction.”  Ashley Mercurio was impressed by the importance of community to those they interviewed.

Students also got an insight into related issues beyond just food, including access to transportation and health care.

“I can’t just assume someone has access to healthy food,” said Chelsea Russell, who said she appreciated the insight that would help her with future clients.

Presentations were made by Jeanine Cava, co-founder and coordinator of the New Jersey Food Democracy Collaborative based at Stockton, Paige Vaccaro, outreach manager for Mighty Writers, Lisa Newcomb, co-president of C.R.O.P.S. and Lisa Pitz , outreach director for Hunger Free New Jersey who also talked about the A.C. Food Access Coalition.

The panelists address how people can get involved at both the ground level and the policy level.

“Students can see now how policy connects to real people,” Gipson-Jones said.  She said the students asked to continue the discussion because they wanted to learn more about how they can make a difference.

“The students wanted to know ‘what’s next?’” said Christina Noble, Stories of AC project manager, who hosted the discussion. She said they have added food information resources on the Stories of Atlantic City website.