Port Republic, N.J. - A young bay scallop sprouts a sticky thread from its shell to cling to a blade of eelgrass—it’s holding on for its life to avoid suffocation on the muddy bay bottom. 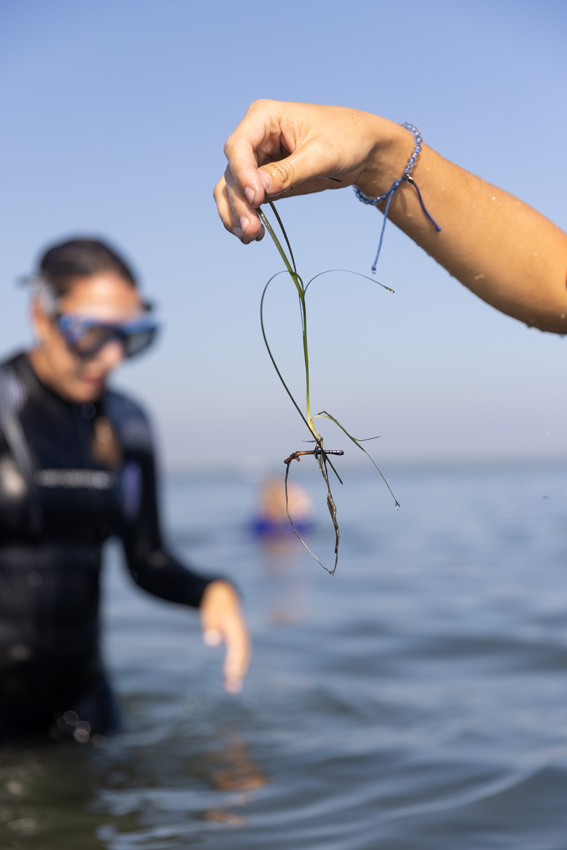 Waterfowl dunk headfirst into a seagrass meadow to nibble on the shoots.

A school of juvenile fish seek shelter in the bright green ribbons of swaying grass that dampen the force of the waves and tide. They’re hiding from predators lurking in the nearby wide-open water.

Monitoring has revealed eelgrass decline in the Barnegat Bay since 2004, making it harder for the species that depend on the grass for survival, but research is sprouting hope.

Elizabeth Lacey, associate professor of Marine Science, found a shallow water site off Bunting Sedge with just the right amount of sunlight for seagrass to photosynthesize and suitable soil and water characteristics. All that was missing was the eelgrass.

Lacey is finding out what it will take to get grass to grow in the bay again.

There could be many reasons contributing to the absence of grass, but she decided to plant seeds and focus on minimizing current to give the eelgrass a chance at taking root.

She looked to the oyster for help.

Throughout the Barnegat Bay, seagrass beds are in decline as a result of sea level rise, climate change, boat prop scars and excessive nutrients.

The New Jersey Department of Environmental Protection (NJDEP) funded Lacey's eelgrass research to help bring back the meadows of seagrass essential to a diverse and healthy ecosystem. The Barnegat Bay Partnership and New Jersey SeaGrant also supported the research.

"A bay without eelgrass means less animals overall, from the birds and mammals to the smallest fishes and everything in between, and less protection from wave and wind action, which costs more money for people who need to protect their coastal homes and businesses," Lacey said.

Lacey’s research set out to determine if a berm of oysters could block current from disrupting eelgrass seeds.

One million eelgrass seeds were hand planted last October with funding from NJDEP.

This August, both the experimental plots with oyster bed protection and the control seagrass-only plots had a meadow of grass growing.

"While the oyster health did not fare well post-transplant, the eelgrass is doing well and we will be surveying again next year to see how the plants survive the winter. The true test will be whether or not our plants produce seeds as that will be the source for regrowth and a persistent seagrass bed," Lacey explained.

Lacey partnered with Christine Thompson, associate professor of Marine Science, to look at the relationships between seagrass beds and oyster reefs and how they can benefit each other.

A bay without eelgrass is like a rainforest without trees, leaving marine creatures homeless.

With the new grass, signs of life returned.

Students Dive in for Underwater Gardening

They rode to the research site aboard the R/V Rudy G. Arndt this summer to take soil core samples, measure water quality and capture photos of the marine life moving into the new habitat.

With added buoyancy from neoprene wetsuits, diving to the bottom is harder. The weight belts counteract the floatation allowing the divers to stay under more easily.

The divers shovel a section of soil loose and burrow a clear cylinder with an open top and bottom to bring up a core sample. At the surface, they identify the species and separate the above and below ground parts to analyze back in the lab where they can weigh the dried grass to get its biomass.

The soil is composed of silt, sand and clay of varying grain sizes, and eelgrass prefers only a very specific combination of those factors.

When the water is full of swirling silt, the particles block sunlight from reaching the bottom and eelgrass growth is stunted or prevented. The team measures turbidity, which quantifies the amount of suspended solids in the water column.

Waves from a storm, boat traffic and humans walking in the bay can all cause the turbidity to increase.

On the summer survey day, the water was clear enough to watch schools of juvenile fish swimming through the new beds of grass.

Oyster reef habitat gave seagrass the chance to take root in the waters off Bunting Sedge by blocking wave action.

Now that grass is growing, the team anxiously awaits the propagation of seed that can settle in the established bed to form a larger meadow.

Learn more about the Stockton Marine Field Station and the reseach projects that it supports.