Environmental Science major Patrick Slane, standing next to the champion tree, grew up visiting Batsto Village with his family. "I never realized that this tree could be just as old as some of the artifacts of the village," he said.

Galloway, N.J. - Finn McGreen’s eyes traced the trunk of a towering Post Oak tree up to its crown. To visually capture the full spread of its uppermost branches, McGreen's neck tipped all the way back.

McGreen, a senior Environmental Science major, and the rest of the Dendrology class at Stockton were in awe of the tree’s height, girth and far-reaching crown.

Matthew Olson, assistant professor of Environmental Science, takes his students to Batsto Village in Wharton State Forest to see a variety of species they talk about in lectures. The field trips are always exciting, but this trip was even more so.

Olson had just been to Batsto looking for red maple trees with tapping potential for Stockton’s maple project when he stumbled upon a giant Post Oak tree just off the beaten path. The tree was the largest of that species he’d ever witnessed. Could it be a record breaker he wondered? 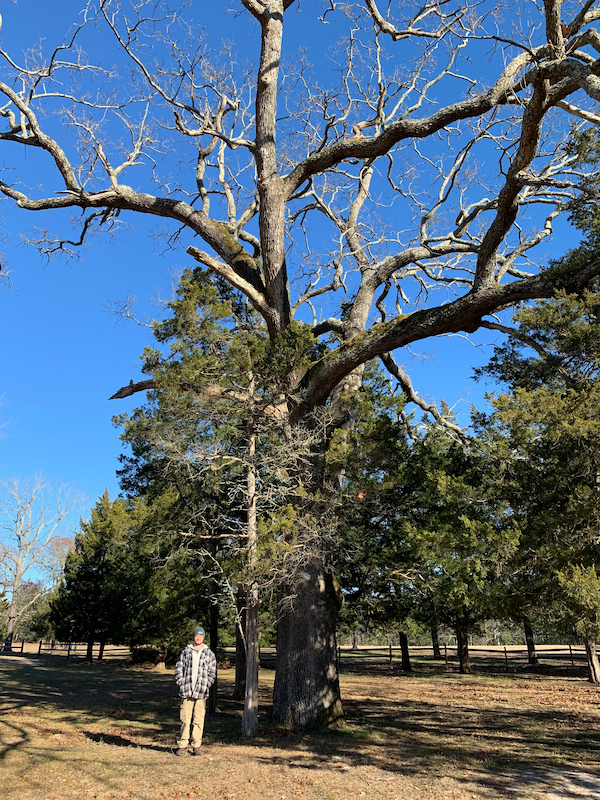 Olson decided to find out with his students. The largest tree of its species is called a champion tree and earns that designation through a scoring system that looks at the sum of trunk circumference, tree height and ¼ of the average crown spread.

“I was really excited when Dr. Olson announced we were going to attempt to designate a state champion,” said Forrest Jennings, a junior Environmental Science and Marine Biology major.

“My first impression of the tree was that it was gigantic! I knew it must have been there for a really long time since it was so large, and I was pretty excited to find out if it was going to be a state champ,” said Jennings.

With the help of math and technology, calculating tree height is safe and simplified.

An electronic hypsometer is used to estimate tree height based on trigonometry. “The one we employed uses sound waves to measure distance from operator to the tree. From the same point, the operator angles the unit to the tree's uppermost shoot, which allows the device to determine angle. From there the magic happens. The unit uses the tangent function to determine height,” explained Olson.

A forestry diameter tape was used to measure circumference. For the average crown spread, students stood directly underneath the tree and measured the widest and narrowest crown widths and averaged them.

“We recorded the measurements and then added them up and saw that the total was way more than the previous champion. It was really cool and an awesome bonus to the class to have been able to discover a state champion tree,” said Jennings.

Joseph Bennett, a New Jersey Department of Environmental Protection assistant regional forester, sent Olson a letter confirming that the tree is the largest Post Oak in Atlantic County and the largest in the state out of two listed.

The champion tree measures 64 feet high, 11 feet 3 inches at its circumference and has a crown spread of 80 feet, which gives it 219 points using the American Forests national system.

Olson’s Denrology class discovery joins more than 500 total champion trees in the state with 214 being publicly visible. The New Jersey Forest Service has been managing the register of big trees since the 1930s.

“Trees of this size are mega resources and perform 600 times the environmental benefits of typical trees,” Bennett wrote in the letter.

Dendrology is an Environmental Science course that explores the anatomy, physiology and ecology of trees. Students learn to identify species by their leaves, bark, twigs, buds and fruit.

Carel Abboud, an Environmental Science major who helped scout the highest point of the champion tree, was inspired to study forestry by the wonder and beauty within forests.

McGreen took Dendrology because he wanted to learn more about native and non-native species in South Jersey, and now plans to continue studying forestry.

Jennings grew up in the Pine Barrens exploring the trails, hiking and camping in the great outdoors.

“Learning dendrology and forestry has always been an interest and passion of mine,” he said.

Jennings shares his passion with a scout camp to inspire them to get involved in conservation.