A.C. Community Cleanup and Party in the Park Attracts 1,000

Atlantic City, N.J.  -  More than 500 people worked up an appetite collecting more than 360 bags of trash at the Stockton University Community Day Cleanup in Atlantic City on Saturday, April 23.

When they got back to O’Donnell Park for the Party in the Park there were four food trucks ready and waiting for them. 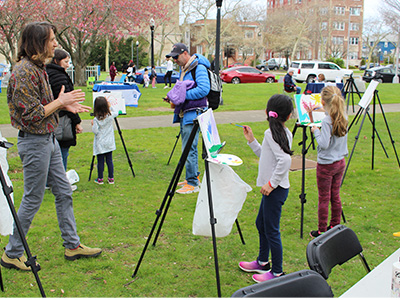 Stockton University Atlantic City hosted its first combined Community Cleanup and Party in the Park as part of the university’s 50th anniversary celebration. The City of Atlantic City co-sponsored the event and offered support in picking up the collected bags of trash.

“We have always said we want to be part of the city, not just in the city,” said Stockton University president Harvey Kesselman, who attended with wife Lynne. “This day is such a great way to bring people together for fun and a good cause.”

The day began early as volunteers arrived at O’Donnell Park to check in and get gloves, trash pickers and lots of trash bags.  Teams were dedicated to each ward of the city and the beach, with over 80 community and Stockton student groups participating.

Bags, gloves and trash pickers were provided by the Atlantic County Utilities Authority (ACUA), the Community Reinvestment and Development Authority and Special Improvement District (CRDA/SID) the City of Atlantic City and Surfrider Foundation. 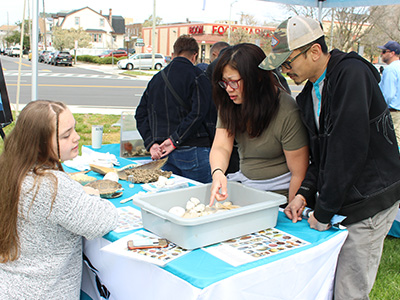 A graffiti removal team painted primer on power boxes around the city. The Atlantic City Arts Commission, with support from the CRDA/SID and Chelsea Economic Development Corporation, is commissioning artists to paint the boxes, and the first design, by artist Flora Zhai was completed just a few days later.

Brian K. Jackson, COO of Stockton Atlantic City, who chaired the Community Day Cleanup Committee, said he was thrilled with the number of people to come out. He estimated the total attendance at about 1,000.

“We can all feel great pride in what we accomplished on Saturday and of our demonstrated commitment to beautifying our unique neighborhoods in Atlantic City,” Jackson said.

Once the cleanup was done, volunteers returned to O’Donnell Park, where the Party in the Park was already getting started as area residents, and lots of young people, visited over 60 venders and activities, including craft booths and food trucks, listened to music, had their faces painted, played cornhole, did chalk drawings on the sidewalk and painted pictures on canvases set up on the grass. 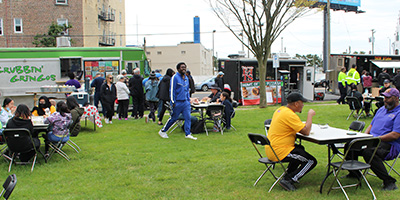 “I’ve never seen so many people here,” said artist Steve Kuzma, who set up the easels for the young artists. “This is such a great idea.”

Michael Cagno, executive director of the Stockton Noyes Arts Garage, chaired the Party in the Park Committee and called the event a classic example of the university’s impact on the city.

“Through strategic partnerships and collaborations, the event provided direct opportunities for community organizations and artists to connect,” Cagno said, “It was wonderful to see people of all ages and backgrounds joining together to celebrate Stockton's 50th anniversary.