Atlantic City, N.J. – Members of Stockton University’s Class of 2022 were encouraged by speakers at Commencement ceremonies May 13 to use their voices and skills to take on new challenges in their own lives and to benefit their communities.

“I may not know your story or your struggles, but today I know your success as we are gathered here to celebrate our achievements together,” said Alyssa Erin Lopez De Guzman of Bergenfield, the student speaker for the morning ceremony, who received a Master of Science degree in Communication Disorders. 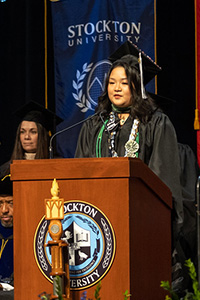 De Guzman shared her own story of finding her voice at Stockton, and she encouraged the graduates to use theirs.

“There is power in your voice,” she said. “I am here to use my voice to remind you that there is still a wage gap between women and men, and that there are still racial injustices every day. Our voices can help us start the conversation on these issues and become leaders for change. I am here to remind you that learning does not stop once we receive our diplomas. In this ever-changing world, we must overcome adversity and be part of the conversation in our communities.”

Commencement was held at Jim Whelan Boardwalk Hall in Atlantic City, just down the street from the site of the former Mayflower Hotel, where 50 years ago the first 1,000 students arrived to begin classes at then brand new Stockton State College. Students and faculty lived and studied at the hotel in fall 1971 until the Galloway campus opened in January 1972. Stockton celebrated its 50th anniversary of teaching during the 2021-22 academic year.

Stockton has grown to more than 9,000 students over the last 50 years. The Class of 2022 has more than 2,700 graduates who received their bachelor's, master's or doctoral degrees in two ceremonies at 10 a.m. and 2:30 p.m.  Despite some early morning rain showers and clouds, families gathered on the Boardwalk and beach to celebrate and take photos as a DJ created a party atmosphere. 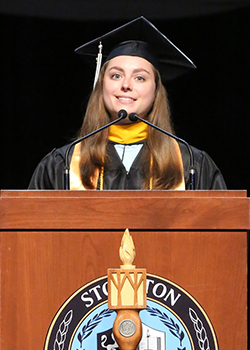 Senior members of the Stockton men’s lacrosse team were the first to graduate in the morning so they could meet up with the team heading to Maryland for the second round of the NCAA tournament on Saturday.

In the afternoon ceremony, student Danielle Dyson of Brick talked about breaking boundaries and how she was able to achieve goals she had not even considered as a Marine Science and Environmental Science double major. She challenged the graduates to “conquer their impossible.”

“I came to Stockton as a freshman just having lost my father. I thought it was impossible to do many things. One year into Stockton, I was working with professors answering research questions about the very bay I grew up next to and would then be set up with a fellowship tagging sharks right here on the Jersey shore.”

She cited the community she found at Stockton and “that being an Osprey truly means being kind, compassionate, and part of one big family.”

Keynote speaker, New Jersey Secretary of Higher Education Brian Bridges, reminded graduates that “commencement” means to begin, and they are starting on a new journey. He offered graduates three pieces of advice: to chart their own path with courage and integrity; embrace lifelong learning, even from the most unexpected places; and to push themselves to move forward and upward, even when they are doing well. 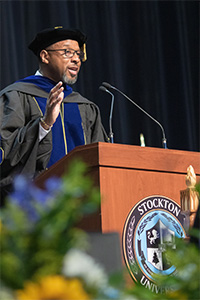 “Those robes and caps you are wearing are indicators of promise fulfilled, but don’t think you’re done,” Bridges said. “Forward and upward means more is in store for each of you here today.”

Bridges shared stories from his own life, mentioning people who have influenced him, ranging from his 11-year-old daughter to the grandmother and aunt who were central to his upbringing, and an elementary teacher who taught him to put forth his “true best effort.”

As the first in his family to graduate high school and attend college, he admitted he was overwhelmed and homesick, but kept going and ultimately learned he wanted to help others like himself “experience the transformative power of higher education.”

“Don’t just press forward, also nudge yourself upward in all aspects of life,” Bridges said. “Don’t be complacent. Pursue greater heights for yourself, your family and those who come after you.”

Bridges also received an honorary Doctor of Public Service degree. An honorary degree was also awarded to Jon Hanson, founder and chairman of The Hampshire Companies, who will receive the award at a ceremony in July. Hanson oversaw the creation of the Atlantic City Development Corp. (ACDevco) which developed the Atlantic City Gateway project that includes the Stockton Atlantic City campus.

Stockton President Harvey Kesselman was unable to attend due to COVID-19 protocols. Provost and Vice President for Academic Affairs Leamor Kahanov spoke in his place, noting that the world is a very different place from when the graduates first arrived on campus, or attended their first Zoom class.

“We have faced historic shifts these past few years,” Kahanov said. “All the more reason why the world needs difference-makers – individuals who commit themselves to making positive change, either out front or behind the scenes, regardless of the challenge, no matter the odds. We all have this spark – to devote part of our time, energy and talent to making the world better. That’s what makes you a formidable Osprey.”

View photos from the morning ceremony.

View photos from the afternoon ceremony.