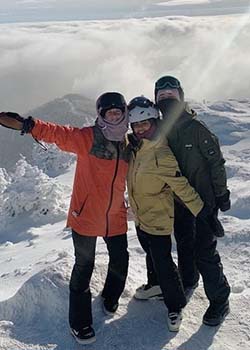 Galloway, N.J. - Are you an avid skier, skiing enthusiast, or even just like the idea of snow sports?

The Stockton Skibums may be the club for you! The club’s founders, Zack Conklin and Amber Loomis said that the club started off as an idea.

“We’re from Sussex County where there aren’t many skiing resorts, but we still considered it a hobby,” Conklin said.

Stockton had a snow sports club before the Skibums, but it was discontinued. Conklin and Loomis decided to try to start another. Ninety-two members later, Conklin believes that it will remain strong.

“I would say that we definitely brought the culture surrounding skiing to Stockton back,” Conklin said.

Since then, the Skibums have traveled to resorts such as Jay Peak in Vermont, which is the closest resort to Canada. Their next destination: Killington Grand Resort and Hotel in Vermont. The trip will be during Spring Break, March 11-14, and interested students can sign up by reaching out to the Skibums on Instagram @stockton_skibums. Students can also join the club through OspreyHub.