Brian Bridges to Speak at Commencement

Galloway, N.J. – New Jersey Secretary of Higher Education Dr. Brian K. Bridges will be the keynote speaker at the Stockton University Commencement Ceremony on May 13 at Jim Whelan Boardwalk Hall in Atlantic City.

The Stockton Board of Trustees on Feb. 23 approved an honorary Doctor of Public Service degree for Bridges, which will be presented at Commencement.

In its resolution, the board noted that “Dr. Bridges exemplifies a commitment to public service through the promotion of equitable access to higher education, as well as promoting resiliency in higher education institutions amidst the pandemic.” 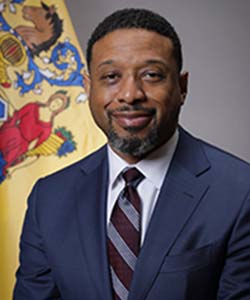 Bridges has served as New Jersey’s Secretary of Higher Education since November 2020.  He previously served as Vice President of Research and Member Engagement at the United Negro College Fund in Washington, D.C.

“Dr. Bridges has been a champion of expanding access to high education to under-served and under-represented students, a goal we, at Stockton, have also embraced,” Stockton President Harvey Kesselman said. “We are delighted that he accepted our invitation to speak at Commencement.”

The trustees also approved an honorary Doctor of Public Service degree for Jon F. Hanson, founder of The Hampshire Companies, and Chairman of the Board of the Atlantic City Development Corporation (ACDevco), which developed the Gateway Project in Atlantic City that includes the Stockton Atlantic City campus.  Hanson is also chairman of the New Jersey Hall of Fame.

“Jon Hanson has been a crucial partner in the effort to bring Stockton to Atlantic City and diversify its economy,” Kesselman said.

Stockton will return to Boardwalk Hall for Commencement after two years of ceremonies on the Galloway campus to accommodate COVID-19 pandemic precautions.  The university will host two ceremonies, at 10 a.m. and 2:30 p.m.   The ceremony includes students who graduated in summer or fall of 2021 and the spring of 2022.

“It is my distinct honor to join the Stockton community in celebrating the extraordinary achievements of our students, many of whom have overcome tremendous adversity to cross the graduation stage this spring,” Bridges said. “I look forward to imparting the lessons learned throughout my educational and professional career on to the next generation of scholars and leaders.”

More information on Commencement is on the Stockton website at Stockton.edu/commencement.

At the board meeting, the Galloway Township Council presented Stockton with a proclamation in recognition of its 50th anniversary.  The first class at then Stockton State College began classes in fall 1971 at the Mayflower Hotel in Atlantic City while the Galloway campus construction was completed. Students moved to Galloway in January 1972.