Student Courtney Weber and Associate Professor of Physics Joseph Trout at the Stockton farm where they grew tomatoes for the research project. Below, Trout's Physics I students make casseroles with the tomatoes and other vegetables from the Stockton farm.

Galloway, N.J. –  Every gardener wants to get the largest crop they can. Stockton University student Courtney Weber and Associate Professor of Physics Joseph Trout are using weather data and the Stockton Sustainable Farm to study the best variety of tomatoes to grow in urban community gardens.

Their results this season will not just help gardeners harvest more tomatoes in the future, but also produced a crop that was turned into 25 large homemade casseroles for Saint John’s Hospice in Philadelphia. 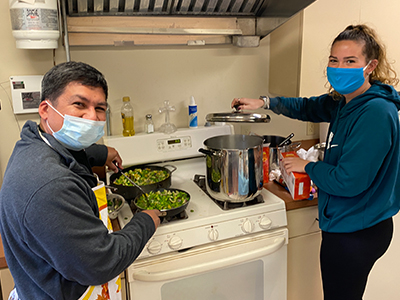 Weber, a biology major and physics minor from Jefferson Township in Morris County, had worked with Trout in the Stockton Observatory and taken Trout’s weather forecasting class.  When she switched her major to biology, Trout suggested the tomato research project, which  involved tracking weather patterns.

“There are problems with urban heat in the community gardens in Philadelphia,” said Trout, citing the effects of the gardens being surrounded by concrete and buildings. “We want to see which varieties might do best.”

They planted nine varieties both in the Spring Garden Community Garden in Philadelphia and at the Stockton farm and observed their progress, working with Associate Professor of Sustainability Ron Hutchison and Robert McKeage at the farm.  Trout said they monitored weather data to see if they could offset some of the heat problem by planting earlier in the city.

“If we can predict the first and last frost we can get as much yield as possible for the community gardens,” Weber said.

“We can’t really do anything about the urban heat effect, but maybe we can tell which tomatoes do best and when it’s best to plant,” Trout added. 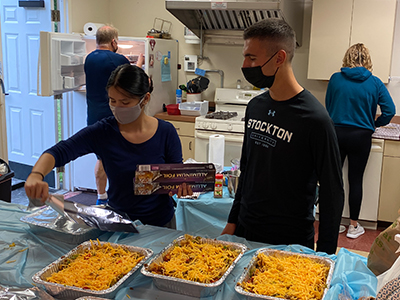 They planted one crop right after the last frost in 2021, and another in the summer. Trout said this year the larger varieties did better in Galloway and the smaller did better in Philadelphia, but they need at least another year of data collection before they can make any recommendations.

Trout said they chose tomatoes because it’s a popular crop with a lot of uses.

“We did try to pick varieties that grow fast, are heat tolerant and could stand the cold and have a longer season,” Trout said.

Students in Trout’s Physics I class used the Stockton crop to feed the homeless as a service-learning project.  They partnered with Father Philip and the Stockton Newman Club, using the  Newman Center kitchen to make pasta casseroles using tomatoes, garlic, and peppers from the Stockton garden.

Weber’s research project is being funded by a Research Experience Undergraduate grant from the Provost’s office.  She said she has not made a career choice yet but is considering something in the biomedical field.

“I just really like science,” Weber said. “And I want to do something medical.”