Galloway, N.J. –  When Thierry Elin-Saintine began observing 11 Black and Brown students in an honors precalculus class at a low-income Philadelphia neighborhood high school he expected to find students who had confidence in their abilities. They did and were highly motivated and determined to lead successful post-secondary lives.

However, he was surprised to learn they did not consider themselves to be “doers of mathematics” - they were just good enough for that class in that school. 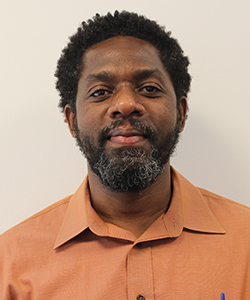 “They could not visualize themselves in a career that involved math,” said Elin-Saintine, an assistant professor of mathematics at Stockton University and resident of the Mt. Airy section of Philadelphia.

In a new book based on his doctoral work, “Racial Inequality in Mathematics Education: Exploring Academic Identity as a Sense of Belonging,” Elin-Saintine explores the factors that discourage students of color from entering mathematics-based careers.

Principal among those factors was a belief among the students, based on their own experiences and sometimes the opinions of others, that they just did not belong in those careers.

All of the students were motivated to prove that stereotypical views of Black and Brown Americans in education are wrong.  But they also worried that they would not be good enough for careers that required math.

Elin-Saintine notes that the public acceptance of math as being difficult is not limited to students of color. Society in general is much more accepting of people who say they are not good in math.

“When we divide people into being either math people or not math people, many just give up,” he said. “But there is not just one or the other.”

The problem is exacerbated for students of color when teachers may already have low expectations and do not challenge them. Even students who meet expectations assume they cannot do more. To them, “math people” just have an innate ability, not a learned skill that took effort and struggle.

“Struggle is part of the learning process and that is something we don’t appreciate,” Elin-Saintine said.

The book notes that one of the highest-performing students’ first reaction to any new math problem was “I don’t know how to do this,” even though he was usually one of the first to complete the task.

Elin-Saintine has master’s degrees in both creative writing and mathematics education and earned his doctorate in urban education with a concentration in mathematics from Temple University.  He has experienced both surprise and disbelief when he tells people he teaches college math.  He admits that those reactions were part of the impetus for him to counter what he calls “the narrative of failure typically associated with Black students.”

“A lot of a student’s identity is based on the experiences they had in math class,” Elin-Saintine said. “We need to stop labeling students and teaching them in bubbles. If you tell a student they are only a ‘C’ student then they think that is all they can be.”

Elin-Saintine said the experience of the 11 students he followed “shed a spotlight on racism in the teaching and learning of mathematics.”  He hopes it can also provide the impetus for new ways to discuss and think about racial inequality in mathematics and break through the barriers that prevent students of color from not just succeeding but believing that they can succeed.

Elin-Saintine writes: "Students’ struggles to develop a sense of belonging to the exclusive community of 'geniuses’ is an indictment of the field of mathematics education, an account of widening educational inequalities in the U.S., and a reminder of the pernicious effects of systemic racism. It is not evidence or ammunition for race-based beliefs of who can or cannot be a math person."

“Racial Inequality in Mathematics Education: Exploring Academic Identity as a Sense of Belonging,” was published by Emerald Publishing as part of its Studies in Educational Ethnology series.