Galloway, N.J. – Stockton University Assistant Professor of Nursing Larider Ruffin has been selected for induction as a Fellow of the American Academy of Nursing. He is one of 225 distinguished nurse leaders in the world to be recognized this year for their contributions to health and health care. 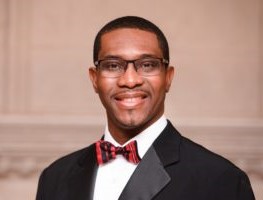 “This is an elite group, and it is a well-deserved and impressive honor,” said Stockton Associate Dean for Nursing and Chief Nurse Administrator Sheila A. Quinn.

He is the chair of the MSN and Post-Master’s Certificate programs at Stockton and Chairman & CEO at Ruffin Associates Healthy Housecalls where he maintains clinical practice as an Adult-Gerontology Primary Care Nurse Practitioner and Certified Tobacco Treatment Specialist.

A native of Haiti, he lives in Egg Harbor Township.

Why did you want to become a nurse practitioner?

Becoming a nurse practitioner is one of the best decisions I have ever made in life. Investing in the care and treatment of those in need in the most critical times of their lives is beyond a job, it’s a calling.

I found nursing to be of particular interest to me at the age of 10, when my mother was sick in a hospital and a male nurse took the time to explain everything to her. That was when I learned a boy could become a nurse. That gentleman was the subject of so many conversations in our home as my mother recovered. He was so important to my family, so I wanted to become important into other people’s lives.

I chose to become a nurse and later a nurse practitioner because this advanced practice role allowed me the freedom to work independently and yet collaboratively to provide individualized holistic patient-centered care to the most vulnerable populations. I take pride in my philosophy to empower patients to be the driver of their care.

Why did you become a nurse educator?

The nursing profession faces the greatest shortage, which has been exacerbated by the COVID-19 pandemic. The nursing population is aging, and many of the baby boomers are retiring.

The great news that our population is living longer leads to more people living longer with chronic conditions leading to a greater need of health services. Therefore, the older generation of nurses is depending more on the healthcare system rather than being a part of it. Additionally, the average age of doctorally-prepared nursing faculty is 57, which leads to a decade timeline to leave the workforce.

The nursing shortage is severely driven by the shortage of nursing faculty, and this is expected to worsen. There are millions of qualified students interested in becoming nurses that could easily replace the aging nursing workforce, but their applications are being rejected every day because of the faculty shortage.

What does being named a Fellow of the American Academy of Nursing mean to you?

Being named a Fellow of the American Academy of Nursing (FAAN) is certainly one of the highest honors in nursing internationally. The FAAN program is by invitation-only, and candidates are nominated by fellows for which nominees must detail their achievements and show a substantial amount of work that has significantly impacted and enriched the profession.

The invitation to become a fellow is more than recognition of one's accomplishments within the nursing profession. Academy Fellows also have a responsibility to contribute their time and energies to the Academy, and to engage with other health leaders outside the Academy in transforming America's health system by enhancing the quality of health and nursing; promoting healthy aging and human development across the life continuum; reducing health disparities and inequalities; shaping healthy behaviors and environments; integrating mental and physical health; and strengthening the nursing and health delivery system, nationally, and internationally.

Among the national stars who have been recognized as honorary fellows in 2020 is Dr. Anthony Fauci.

What issues in nursing are most important to you?

As a nurse practitioner and Certified Tobacco Treatment Specialist caring for patients with chronic diseases related to smoking and vaping, my work has been disseminated through 12 publications, one book chapter, and 31 national and international presentations with a readership and attendance of over 100,000.

My creation of a Smoking & Vaping Cessation program has been implemented across multiple group practices in New Jersey. Due to the predatory nature of big tobacco and its devastating impact on Black Americans, I held a series of “train the trainer” workshops for over 200 teachers and nurses in five major school districts in New Jersey. The goal of the workshops was to educate participants on the different types of vaping products such as fruity flavors and devices that are directed to high-risk children. To date, over 10,000 students have been educated on the health hazards of smoking and vaping.

During my tenure as chair of the National Black Nurses Association (NBNA) Substance Use Disorders Committee, I spearheaded the annual “NBNA No Tobacco Day” to advocate for increased awareness of the negative impacts of smoking and vaping. The committee developed an evidence-based toolkit to mobilize nurses to educate the public regarding smoking and vaping. The toolkit and Smoking & Vaping Cessation Program are currently implemented in 95 NBNA chapters across 35 states, impacting the lives of millions of people who suffer and die from smoking and vaping related illnesses.

In January 2020, NBNA urged members of Congress to recognize smoking and vaping as a leading public health addiction and to support legislation that reduces smoking and vaping rates to ultimately eliminate health disparities. As a result, the U.S. House of Representatives passed H.R. 293, a comprehensive bill to address the youth tobacco epidemic.

My commitment to improving smoking and vaping education in healthcare delivery led to major health policy initiatives which impacted the lives of millions of people not only in the United States, but around the world. As a fellow at the American Academy of Nursing, I am committed to making greater impacts and promoting smoke-free and vape-free environments.

How do you view the role of Black nurses and specifically Black male nurses in health care today?

Traditional gender roles in the workplace have shifted. The time where only men could be truck drivers, or females could be nurses is no more. As the American society becomes increasingly diverse, so as has the field of healthcare, leading men and minorities to shift to the nursing workforce. Be it for economical and societal reasons, more and more men are looking to nursing to focus their professional energy. As the population diversifies there is a greater need for patients to be cared for by those who look like them. The demand for male nurses has significantly increased over the years and this trend is expected to continue.

It was a great honor for me to serve as the first male president of the Northern New Jersey Black Nurses Association. We have touched the lives of many nursing students through mentorship and scholarship. I was able to energize the organization to meeting its strategic goals and vision to improving the health of minorities in our communities. This work led the organization to receive three National Awards in 2017.

I had the pleasure of being nominated for fellowship into the AAN by two former Presidents of the NBNA. These are great national mentors who have been coaching me for many years. NBNA serves as the voice for Black nurses in diverse populations ensuring equal access to professional development by promoting educational opportunities and improving health. Black nurses offer voluntary services by providing health education and screenings to community residents in collaboration with community-based partners, including faith-based organizations, civic, fraternal, hospitals, and schools of nursing.